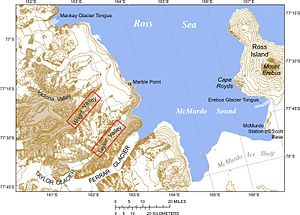 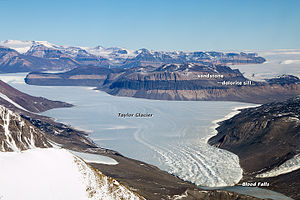 Taylor Valley is the southernmost of the three large Dry Valleys in the Transantarctic Mountains, Victoria Land, located west of McMurdo Sound at approximately Lua error in Module:Coordinates at line 668: callParserFunction: function "#coordinates" was not found.. The valley extends from Taylor Glacier in the west to McMurdo Sound at Explorers Cove at the northwest head of New Harbour in the east and is about 29 kilometres (18 mi) long. It was once occupied by the receding Taylor Glacier, from which it derives its name. Taylor Valley contains Lake Bonney in the west (inward), and Lake Fryxell in the east (coastward), and Lake Hoare, Lake Chad, Lake Popplewell, Mummy Pond and Parera Pond close together between the two. Further east of Lake Bonney is Pearse Valley. Taylor Valley is separated from Wright Valley in the north by Asgard Range, and from Ferrar Glacier in the south by Kukri Hills.

Taylor Valley was discovered by the British National Antarctic Expedition (1901–04), it was more fully explored by the BrAE (1907–09) and the BrAE (1910–13), and named after Australian Geologist Thomas Griffith Taylor.

In the oblique aerial photo at right, the tan bands are sandstone layers from the Beacon Supergroup, a series of sedimentary rock layers formed at the bottom of a shallow sea between 250 million and 400 million years ago. Throughout that period, Earth’s southern continents were locked into the supercontinent Gondwana.

The dark band of rock that divides the sandstone is dolerite (sometimes called diabase), a volcanic rock that forms underground. The distinctive dolerite intrusion—or sill—is a remnant of a massive volcanic plumbing system that produced major eruptions about 180 million years ago. The eruptions likely helped tear Gondwana apart.[1]