From Infogalactic: the planetary knowledge core
Jump to: navigation, search
This article is about the hymn. For the type of service, see Te Deum (religious service).
"Ambrosian Hymn" redirects here. For hymns written by Ambrose, see Ambrosian hymns. 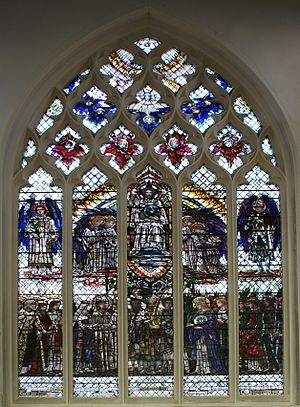 The Te Deum (also known as Ambrosian Hymn or A Song of the Church) is an early Christian hymn of praise. The title is taken from its opening Latin words, Te Deum laudamus, rendered as "Thee, O God, we praise".

The hymn remains in regular use in the Catholic Church in the Office of Readings found in the Liturgy of the Hours, and in thanksgiving to God for a special blessing such as the election of a pope, the consecration of a bishop, the canonization of a saint, a religious profession, the publication of a treaty of peace, a royal coronation, etc. It is sung either after Mass or the Divine Office or as a separate religious ceremony.[1] The hymn also remains in use in the Anglican Communion and some Lutheran Churches in similar settings.

In the traditional office, the Te Deum is sung at the end of Matins on all days when the Gloria is said at Mass; those days are all Sundays outside Advent, Septuagesima, Lent, and Passiontide; on all feasts (except the Triduum) and on all ferias during Eastertide. Before the 1962 reforms, neither the Gloria nor the Te Deum were said on the feast of the Holy Innocents, unless it fell on Sunday, as they were martyred before the death of Christ and therefore could not immediately attain the beatific vision.[2] A plenary indulgence is granted, under the usual conditions, to those who recite it in public on New Year's Eve.[3]

In the Liturgy of the Hours of Pope Paul VI, the Te Deum is sung at the end of the Office of Readings on all Sundays except those of Lent, on all solemnities, on the octaves of Easter and Christmas, and on all feasts.[4] It is also used together with the standard canticles in Morning Prayer as prescribed in the Anglican Book of Common Prayer, in Matins for Lutherans, and is retained by many churches of the Reformed tradition.

Authorship is traditionally ascribed to Saints Ambrose and Augustine, on the occasion of the latter's baptism by the former in AD 387. It has also been ascribed to Saint Hilary, but Catholic-Forum.com says "it is now accredited to Nicetas, bishop of Remesiana; (4th century)".[5]

The petitions at the end of the hymn (beginning Salvum fac populum tuum) are a selection of verses from the book of Psalms, appended subsequently to the original hymn.

The hymn follows the outline of the Apostles' Creed, mixing a poetic vision of the heavenly liturgy with its declaration of faith. Calling on the name of God immediately, the hymn proceeds to name all those who praise and venerate God, from the hierarchy of heavenly creatures to those Christian faithful already in heaven to the Church spread throughout the world. The hymn then returns to its credal formula, naming Christ and recalling his birth, suffering and death, his resurrection and glorification. At this point the hymn turns to the subjects declaiming the praise, both the universal Church and the singer in particular, asking for mercy on past sins, protection from future sin, and the hoped-for reunification with the elect.

Chant of Te Deum in Latin

The text has been set to music by many composers, with settings by Haydn, Mozart, Berlioz, Verdi, Bruckner, Furtwängler, Dvořák, Britten, Kodály, and Pärt among the better known. Jean-Baptiste Lully wrote a setting of Te Deum for the court of Louis XIV of France, and received a fatal injury while conducting it. The prelude to Marc-Antoine Charpentier's setting (H.146) is well known in Europe on account of its being used as the theme music for some broadcasts of the European Broadcasting Union, most notably the Eurovision Song Contest. Sir William Walton's Coronation Te Deum was written for the coronation of Queen Elizabeth II in 1953. Other English settings include those by Thomas Tallis, William Byrd, Henry Purcell, Edward Elgar, and Herbert Howells, as well as three settings each by George Frideric Handel and Charles Villiers Stanford.

Puccini's opera Tosca features a dramatic performance of the initial part of the Te Deum at the end of Act I.

A version by Father Michael Keating is popular in some Charismatic circles. Mark Hayes wrote a setting of the text in 2005, with Latin phrases interpolated amid primarily English lyrics. In 1978, British hymnodist Christopher Idle[6] wrote God We Praise You,[7] a version of the text in 8.7.8.7.D meter, set to the tune Rustington. British composer John Rutter has composed two settings of this hymn, one entitled Te Deum and the other Winchester Te Deum. Igor Stravinsky set the first 12 lines of the text as part of The Flood in 1962. Antony Pitts was commissioned by the London Festival of Contemporary Church Music to write a setting for the 2011 10th Anniversary Festival.[8][9] The 18th-century German hymn Großer Gott, wir loben dich is a free translation of the Te Deum, which was translated into English in the 19th century as "Holy God, we praise thy name."[10]

In the Book of Common Prayer, verse is written in half-lines, at which reading pauses, indicated by colons in the text.