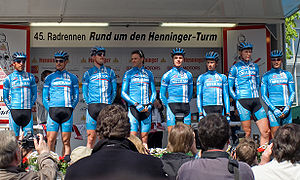 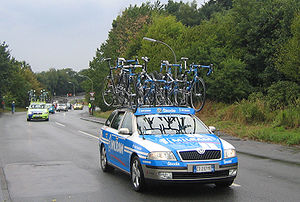 The pro cycling team was founded in the beginning of 2006, taking over the UCI ProTeam license of Team Domina Vacanze and merging with Team Wiesenhof. The main sponsor is the Milram brand of the Bremen based Nordmilch dairy company. Some smaller sponsors include Motorex, an oil company based in Switzerland. Sprinters Alessandro Petacchi and Erik Zabel initially were the top riders and captains. The squad is completed by 25 mainly German riders.

Among Team Milram’s most important successes in 2006 and 2007 Christian Knees’s win at the German classic race „Rund um Köln“, Alessandro Petacchi winning the Niedersachsen-Rundfahrt in2006 and 2007, Erik Zabel’s title as vice World Champion 2006, his win of the best sprinter’s jersey at the Deutschland-Tour 2006 and 2007 his three stage wins at the Vuelta a España. Further important ranks are Alessandro Petacchi’s five stage wins at the Giro d'Italia 2007, his win at the classic race Paris–Tours and Niki Terpstra's win of the best climber’s jersay at the Deutschland-Tour 2007.

Since 2008, Team Milram is a German team. The general manager is Gerry van Gerwen. His operating company VeloCity GmbH, which was founded in 2007, took over the previous Italian operating company Ciclosport with all components including the ProTour license for the beginning of the 2008 season. The new team basis is Dortmund’s Club Olympia. With a new organisation structure, a much younger squad, clear objectives and an enhanced anti-doping-programme the team has changed extensively.

In 2009 and 2010, the team was sponsored by Focus Bikes.[1] After a lengthy search for a title sponsor to replace the outgoing Nordmilch dairy company proved fruitless, the team was forced to disband effective at the end of the 2010 season. Van Gerweren hoped to form a new team for 2012.[2]

At 23 May 2007, during the 2007 Giro d'Italia, Alessandro Petacchi was found guilty of using salbutamol after a doping control. Petacchi had a certificate to use salbutamol in the treatment of asthma, but his level of salbutamol was extremely high. Petacchi was placed on non-active status and missed the 2007 Tour de France.[3] In July 2007, Italian Cycling Federation (FCI) ruled that Petacchi gave good reasons for this high level. Petacchi was then absolved by the FCI when they deemed any overuse of Salbutamol as simple human error.[4] The Italian National Olympic Committee (CONI) argued that Petacchi should be suspended for the high level of salbutamol, and send the case to the International Court of Arbitration for Sport (CAS) in Lausanne, the sporting world's highest court.

On May 6, 2008, the Court of Arbitration for Sport banned Petacchi until the end of August, applied retroactively from last November. CAS also announced that all competitive results obtained during the 2007 Giro d'Italia shall be disqualified with all of the resulting consequences including forfeiture of any medals, points and prizes. Results obtained after 31 October 2007 and during the period of ineligibility will be disqualified.[5][6]

Successes in the 2007 ProTour

Victories in the 2007 Continental Tour