From Infogalactic: the planetary knowledge core
(Redirected from Technical University of Vienna)
Jump to: navigation, search 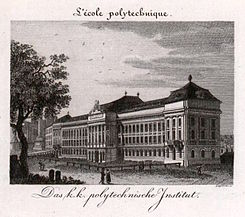 The main building of TU Wien at the Karlsplatz in 1825 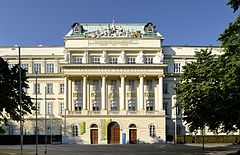 The main building of the Vienna University of Technology 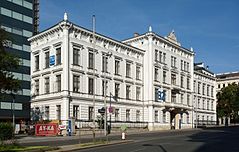 Former Geniedirektion, institute building of the Vienna University of Technology

Today the university finds high international and domestic recognition in teaching as well as in research and is a highly esteemed partner of innovation oriented enterprises.[1] It currently has about 26,200 students (19% foreign students/30% women), eight facilities and about 4,000 staff members (1,800 academics). The university's teaching and research is focused on engineering and natural sciences.

The education offered by TU Wien is rewarded by high international and domestic recognition. The chances for graduates for getting an attractive employment are very prosperous. The high demand for graduates of the TU Wien from economy and industry, governmental as well as research institutions are manifest evidence for this.[2]

TU Wien is one of the most prestigious universities of technology in the world by presenting a top level of research and education.[3] TU Wien is among the most successful technical universities in Europe and is Austria’s largest scientific-technical research and educational institution.[4] As a university of technology, TU Wien covers a wide spectrum of scientific concepts from abstract pure research and the fundamental principles of science to applied technological research and partnership with industry.[5] For nearly 200 years, TU Wien has been a place of research, teaching and learning in the service of progress.[4]

TU Wien is ranked 100th in the subject area of Engineering and Technology by the Times Higher Education World University Rankings in 2015.

The University is led by the Rector and four Vice Rectors (responsible for Research, Academic Affairs, Finance as well as Human Resources and Gender). The Senate has 26 members. The University Council, consisting of seven members, acts as a supervisory board.

Development work in almost all areas of technology is encouraged by the interaction between basic research and the different fields of engineering sciences at the TU Wien. Also, the framework of cooperative projects with other universities, research institutes and business sector partners is established by research section of the TU Wien. The TU Wien has sharpened its research profile by defining competence fields and setting up interdisciplinary collaboration centres, and here clearer outlines will be developed.

Research focus points of TU Wien are introduced as computational science and engineering, quantum physics and quantum technologies, materials and matter, information and communication technology and energy and environment.

The EU Research Support (EURS) provides services at the TU Wien and informs both researchers and administrative staff in preparing and carrying out EU research projects. 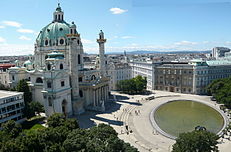 Karlskirche and Vienna University of Technology

The TU Wien University Library was founded in 1815. The Main Library building was designed by the architects Justus Dahinden, Reinhard Gieselmann, Alexander Marchart, Roland Moebius & partners. Completed in 1987, it features owl sculptures by the Swiss artist Bruno Weber. The Main Library has six floors of open access areas and reading rooms, with around 700 study desks.

The University hosted the IFIUS World Interuniversity Games in October 2007.