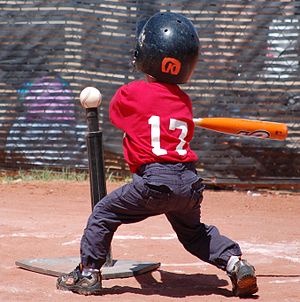 A tee-ball player swings at a ball resting on the tee.

Tee-ball (also teeball, tee ball or t-ball) is a team sport based on and simplifying baseball and softball. It is intended as an introduction for children aged 4 to 8 to develop ball-game skills and have fun.

The principal difference between tee-ball and its adult counterparts is that the child usually hits the ball off of a stationary tee; the ball is generally not pitched. Thus, tee-ball allows a young child to learn the skills of batting, catching, running the bases, and throwing, while making it both easier to hit the ball and less likely for batters to be injured since they do not need to dodge wayward pitches (the ball is also softer).

Despite the implication of some of the spellings of the game's name, the tee used in tee-ball is not T-shaped, but simply an upright, flexible shaft on a movable base. The capitalized, spaced-apart name "Tee Ball" is a registered trademark in the US, by a church-affiliated Florida league, as is the abbreviated "T-Ball" (stylized "T•BALL" in logos), by a national, non-profit, secular league.

Tee-ball associations generally allow children between the ages of four and seven to play in their leagues.[1] A tee-ball coach sets the team lineup and fielding positions in the team's scorebook. The positions that get the most action in tee-ball are pitcher and first base, followed by the rest of the infield positions. In some leagues, catcher is also a special position due to the added gear that is worn; in other leagues, there is no catcher. In tee-ball, the pitcher is usually used for defensive purposes only, though gently pitched balls may be used with older or more advanced players in place of the fixed tee. The ball is placed on an adjustable tee atop the home plate at a suitable height for the batter to strike. (In some clubs, adult coaches give the batter an opportunity to try and hit a few pitched balls before going to the tee in the hope that this will further develop batting skills.)[2] Most of the other rules are similar or identical to those of baseball,though the game is played on a smaller field, typically one used for Little League or other youth baseball.[2] In addition, for the youngest tee-ball players, runs and outs are often not recorded, and every player gets to bat each inning.[1]

A young catcher crouches behind the tee. 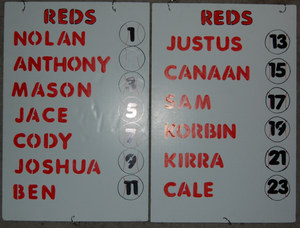 Example tee-ball roster sign that is displayed so the fans can cheer the kids by name.

Many parents assist during the game by coaching players in the dugout, in the field, on the bases, and at the plate. They often also perform the task of umpiring.

Balls: typically appear identical to baseballs, but slightly softer to reduce injuries: 9 to 9.5 " around, 4 to 5 oz weight, with a molded core or sponge rubber center.[2]

Safety helmets: Mandatory at all times.[2]

Tee: Height-adjustible, flexible tube, with a movable base.[2]

The game's origins date back to at least the 1950s, with several people claiming to be the father of the game, and it appears to have been independently invented in several places. Albion, Michigan claims to be the earliest place of invention of the sport, in 1956, by Jerome Sacharski. [3] Claude Lewis, director of the Warner Robins, Georgia, Recreation Department, formed a tee-ball league in March 1958, in which 20 children played the first year. Lewis designed rules for the new game and mailed the rule books out to rec departments all over the country and overseas. Nevertheless, Starkville, Mississippi claims to have independently created tee-ball in their town in 1961. According to the Starkville Rotary Club's website: "In 1961, when it was apparent that younger children needed some way to participate in the program, Rotarians Dr. Clyde Muse and W. W. Littlejohn devised the game of t-ball and added it to the summer baseball program."[4]

A "Tee Ball" trademark was registered in the early 1970s[clarification needed] with the United States Patent and Trademark Office by Robert Dayton Hobbs (1924–2006), the fundamentalist Christian pastor of a church he founded in Milton, Florida, and also the organizer in the late 1950s of the first organized youth baseball program in Santa Rosa County, Florida.[5] Hobbs's "Tee Ball" trademark was still asserted by Gospel Projects, Inc., of Milton, Florida, at least as of 2009[update] (last year of publication of their "Tee Ball Baseball Organization Rules").[6]

It is estimated that 2.2 million children play tee-ball.[7]

A non-profit governing body exists in the United States, the T-Ball USA Association, of West Palm Beach, Florida.[9] It is a national member of USA Baseball, a partner of the International Baseball Federation (IBAF), and its principal officers are members of the National Council of Youth Sports.[9] The association publishes a summarized basic rule-set[10] and field requirements,[11] and supports local parks and recreation departments, youth activity clubs and baseball leagues, military bases's youth programs, and independent parent-administered leagues.[9] The organization also arranges events, including tee-ball team attendance at Major and Minor League baseball games, and the MLB All-Star Game FanFests.[9] Their stylized "T•BALL USA" logo "identifies the projects and programs created to support the national tee ball constituency and marks licensed and approved products, corporate sponsorships and appropriate alliances."[9]