From Infogalactic: the planetary knowledge core
Jump to: navigation, search
File:Australian Census 2011 demographic map - Australia by SLA - BCP field 7214 Persons Information media and telecommunications Total.svg
Adults employed in the information media and telecommunications industry as a percentage of the adult population in Australia divided geographically by statistical local area, as of the 2011 census

Telecommunications in Australia involves the availability and use of electronic devices and services, such as the telephone, television, radio or computer, for the purpose of communication. 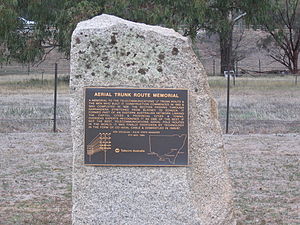 A memorial at Narrandera, New South Wales to the "J" trunk route linking the Australian cities and towns on the east coast

Following federation, the colonial networks (staff, switches, wires, handsets, buildings etc.) were transferred to the Commonwealth and became the responsibility of the first Postmaster-General (PMG), a federal Minister overseeing the Postmaster-General's Department that managed all domestic telephone, telegraph and postal services. With 16,000 staff (and assets of over £6 million) it accounted for 80% of the new federal bureaucracy. That figure climbed to over 120,000 staff (around 50% of the federal bureaucracy) by the late sixties.

Public phones were available in a handful of post offices and otherwise restricted to major businesses, government agencies, institutions and wealthier residences. Eight million telegrams were sent that year over 43,000 miles of line.

There were around 33,000 phones across Australia, with 7,502 telephone subscribers in inner Sydney and 4,800 in the Melbourne central business district. A trunk line between Melbourne (headquarters of the PMG Department) and Sydney was established in 1907, with extension to Adelaide in 1914, Brisbane in 1923, Perth in 1930 and Hobart in 1935.

Overseas cable links to Australia remained in private hands, reflecting the realities of imperial politics, demands on the new government's resources, and perceptions of its responsibilities. On 12 July 1906 the first Australian wireless overseas messages were sent between Point Lonsdale, Victoria and Devonport, Tasmania.[1] Australia and New Zealand ratified the 1906 Berlin Radio-telegraph Convention in 1907. The PMG department became responsible for some international shortwave services - particularly from the 1920s - and for a new Coastal Radio Service in 1911, with the first of a network of stations operational in February 1912.

During the 1930s the PMG became responsible for the Australian Broadcasting Commission (ABC).

Background to the service:

Deregulation and the establishment of Telstra

In practice Aussat's charter restricted it from acting as a competitor to Telecom, including a prohibition on interconnecting public switched traffic with Telecom's network. Aussat's viability was undermined through restrictions on raising capital, of critical importance given tepid government support and increasing costs. It wasn't until 1985 that Australia's first geostationary communications satellite was operational; by late 1990 it had debts of about $400 million.

Proposals for a merger of Aussat and OTC (thereby permitting national delivery of telecommunication services in competition with Telecom) were rejected in favor of disposal of the satellite operator to a non-government entity that would be allowed to compete with Telecom.

Immediately following the decision that Optus Communications - a private sector entity owned by a consortium that included BellSouth - would be given Australia's second general carrier licence purchased the Satellite assets with many of the Non Satellite Assets remaining with the Government as part of Telstra.

Cable & Wireless, privatised after several decades of UK government ownership, took a controlling stake in Optus in 1998 (under the banner Cable & Wireless Optus) before control passed to SingTel in 2001.

Optus was initially allowed to enter the Australian telecommunications marketplace for national long distance and international telephone calls, with other players prevented from entering the general telephone market until 1997 and 'pro-competition' mechanisms under the Trade Practices Act 1974- such as guaranteed access to Telecom's existing infrastructure on reasonable terms - meant to ensure its viability.

Telstra also faced competition in market niches such as long distance corporate voice and data services, with AAPT (a spinoff of the local AAP financial data/news service) active from 1991. MCI Communications, later absorbed by WorldCom, was an early major shareholder of AAPT but departed in 1994. New Zealand's Todd Corporation took a 24.5% stake in AAPT in 1992. In 1995 AAPT launched a mobile phone service, using Vodafone as its network supplier, acquired a 50% of Australian ISP connect.com.au Pty Ltd and bought NewsNet ITN. In the same year SingTel acquired a 24.5% shareholding in AAPT.

In 1996 AAPT bought 40% of Cellular One Communications, followed by QNET Communications. In that year it gained a carrier licence, offering long distance services to the residential market and building communications networks for the South Australian and Victorian governments. It subsequently moved to 100% of CorpTEL Communications, its AAPT Sat-Tel satellite joint venture, connect.com.au and Cellular One. US operator Primus acquired Axicorp (rebadged as Primus Telecom) in 1997, gaining a carriers license and expanding into internet services.

AOTC was rebadged as Telstra Corporation in 1993, trading internationally as Telstra from that year and domestically as Telstra from 1995. International expansion was wound back in 1997-98. In 1996 Telstra recorded the largest profit in Australian corporate history, some $3.8 billion and was partly privatised in November 1997 through sale by the Commonwealth of around 33.3% of its shareholding.

Australia's telecommunications market was formally opened to full competition in July 1997, with removal of restrictions on the number of licensed operators and anti-competition mechanisms (replaced by general competition law under the oversight of the Australian Competition and Consumer Commission). The new regime featured a single national phone numbering scheme and any-to-any connectivity requirements, with the expectation that mobile phones, fixed-line phones and other devices would be able to communicate with each other irrespective of whether the service was provided by Telstra or one of its competitors.

At the end of 1998 there were over 20 licensed telecommunications carriers controlling facilities in Australia, with several hundred other entities using those facilities to provide services to consumers. That number had climbed to 99 by May 2002 (with 11 licences surrendered); the Australian Communications Authority estimated that the benefits to consumers of telecommunications services from competition in 2000/1 were between $5.5 billion and $12 billion.

Some of Telstra's overseas ventures had proved unsuccessful, with withdrawal from some South East Asian markets and major writedowns of joint venture investments such as the $2.7bn Reach undersea cable with Hong Kong-based PCCW.

Satellites are used to provide telecommunications services in very remote areas. These are primarily the Optus satellites C1 D1 and D2.

There are also a number of satellite earth stations, which provide access points into the Australian networks:

Australia is linked to the world by several fibre-optic cables: