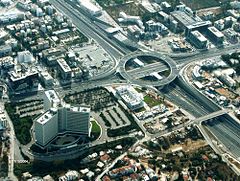 OTE, the former state monopoly, is the main player in fixed-line telephony. Since the liberalization of the telecommunications market, OTE has been slowly losing market share to "alternative", competing telecom operators, such as hellas online, Wind, Cyta, Forthnet and Tilefonia. As of 2005, OTE's share on the market hovered around 76%.|

Until the Greek government closed the company down on 11 June 2013, the state radio and television broadcasting agency was ERT (Elliniki Radiofonia kai Tileorasi - Greek Radio & Television). The station owned 3 national television stations, ET-1, NET (Nea Elliniki Tileorasi) and ET-3 which was based out of Thessaloniki. In January 2006, ERT launched Digital Terrestrial Television with 3 channels. By March 2006, at least 65% of the Greek population was able to view Digital TV for free with the use of set-top boxes. ERT also operated 7 national radio stations, including ERA 5, the Voice of Greece, which broadcast internationally via shortwave. ERT was based in Athens.

As above, the Greek government announced the closure of ERT on 11 June 2013 with effect from midnight that evening. Since its official closure, employees of ERT have continued broadcasting with their feed being retransmitted online by various websites both inside and outside of Greece notably the CYBC in Cyprus and via the website of the EBU (European Broadcasting Union). The closure of ERT has had political implications in Greece with the smallest party of the Greek coalition government, the Democratic Left withdrawing from government leaving Greece with a New Democracy / PASOK coalition government which has a majority of only three seats.

The first non-pirate private radio station to broadcast in Greece was Athena 98.4 FM, in 1987. Private television began in November, 1989 when Mega Channel began operating. Today, over 1,000 radio stations and approximately 150 television stations broadcast in Greece. Digital satellite broadcasting began in 1999 by the South-African conglomerate Naspers which uses the trademark Nova.

The Broadcasting Media in Greece is considerably free and fair. Established state-run and commercial TV networks broadcast nationally and compete actively against each other, and hundreds of thousands of viewers subscribe to satellite pay-TV services.Domestically-made variety programmes, comedies and game shows dominate the peak-time TV schedules and are highly popular and widely shown in Greece.[3]

Hellenic Post is the state-owned postal service provider of Greece. A number of private courier services, such as DHL, ACS, United Parcel Service and FedEx (Speedex), also operate in Greece.