Telephony (/təˈlɛfəni/ tə-LEF-ə-nee) is the field of technology involving the development, application, and deployment of telecommunication services for the purpose of electronic transmission of voice, fax, or data, between distant parties. The history of telephony is intimately linked to the invention and development of the telephone.

Telephony is commonly referred to as the construction or operation of telephones and telephonic systems and as a system of telecommunications in which telephonic equipment is employed in the transmission of speech or other sound between points, with or without the use of wires.[1] The term is also used frequently to refer to computer hardware, software, and computer network systems, that perform functions traditionally performed by telephone equipment. In this context the technology is specifically referred to as Internet telephony, or voice over Internet Protocol (VoIP).

The first telephones were connected directly in pairs. Each user had a separate telephone wired to the locations he might wish to reach. This quickly became inconvenient and unmanageable when people wanted to communicate with more than a few people. The inventions of the telephone exchange provided the solution for establishing telephone connections with any other telephone in service in the local area. Each telephone was connected to the exchange via one wire pair, the local loop. Nearby exchanges in other service areas were connected with trunk lines and long distance service could be established by relaying the calls through multiple exchanges.

Initially the switchboards were manually operated by an attendant, a switchboard operator. When a customer cranked a handle on the telephone, it turned on an indicator on the board in front of the operator who would plug the operator headset into that jack and offer service. The caller had to ask for the called party by name, later by number, and the operator connected one end of a circuit into the called party jack to alert them. If the called station answered the operator disconnected their headset and complete the station-to-station circuit. Trunk calls were made with the assistance of other operators at other exchangers in the network.

In modern times, most telephones are plugged into telephone jacks. The jacks are connected by inside wiring to a drop wire which connects the building to a cable. Cables usually bring a large number of drop wires from all over a district access network to one wire center or telephone exchange. When a telephone user wants to make a telephone call, equipment at the exchange examines the dialed telephone number and connects that telephone line to another in the same wire center, or to a trunk to a distant exchange. Most of the exchanges in the world are interconnected through a system of larger switching systems, forming the public switched telephone network (PSTN).

After the middle of the 20th century, fax and data became important secondary users of the network created to carry voices, and late in the century, parts of the network were upgraded with ISDN and DSL to improve handling of such traffic.

Today, telephony uses digital technology (digital telephony) in the provisioning of telephone services and systems. Telephone calls can be provided digitally, but may be restricted to cases in which the last mile is digital, or where the conversion between digital and analog signals takes place inside the telephone. This advancement has reduced costs in communication, and improved the quality of voice services. The first implementation of this, ISDN, permitted all data transport from end-to-end speedily over telephone lines. This service was later made much less important due to the ability to provide digital services based on the IP protocol.

Since the advent of personal computer technology in the 1980s, computer telephony integration has progressively provided more sophisticated telephony services, initiated and controlled by the computer, such as making and receiving voice, fax, and data calls with telephone directory services and caller identification. The integration of telephony software and computer systems is a major development in the evolution of the automated office. The term is used in describing the computerized services of call centers, such as those that direct your phone call to the right department at a business you're calling. It's also sometimes used to describe the ability to use your personal computer to initiate and manage phone calls (in which case you can think of your computer as your personal call center).[2] CTI is not a new concept and has been used in the past in large telephone networks, but only dedicated call centers could justify the costs of the required equipment installation. Primary telephone service providers are offering information services such as automatic number identification, which is a telephone service architecture that separates CTI services from call switching and will make it easier to add new services. Dialed Number Identification Service (DNIS) on a scale is wide enough for its implementation to bring real value to business or residential telephone usage. A new generation of applications (middleware) is being developed as a result of standardization and availability of low cost computer telephony links.

This system is being fiercely challenged by and to a great extent yielding to Voice over IP (VoIP) technology, which is also commonly referred to as IP Telephony and Internet Telephony. IP telephony is a modern form of telephony which uses the TCP/IP protocol popularized by the Internet to transmit digitized voice data. Also, unlike traditional phone service, IP telephony service is relatively unregulated by government. In the United States, the Federal Communications Commission (FCC) regulates phone-to-phone connections, but says they do not plan to regulate connections between a phone user and an IP telephony service provider.Using the Internet, calls travel as packets of data on shared lines, avoiding the tolls of the PSTN. The challenge in IP telephony is to deliver the voice, fax, or video packets in a dependable flow to the user. Much of IP telephony focuses on that challenge.[3]

Starting with the introduction of the transistor, invented in 1947 by Bell Laboratories, to amplification and switching circuits in the 1950s, and through development of computer-based electronic switching systems, the public switched telephone network (PSTN) has gradually evolved towards automation and digitization of signaling and audio transmissions.

Digital telephony is the use of digital electronics in the operation and provisioning of telephony systems and services. Since the 1960s a digital core network has replaced the traditional analog transmission and signaling systems, and much of the access network has also been digitized.

Digital telephony has dramatically improved the capacity, quality, and cost of the network. End-to-end analog telephone networks were first modified in the early 1960s by upgrading transmission networks with Digital Signal 1 (DS1/T1) carrier systems, designed to support the basic 3 kHz voice channel by sampling the bandwidth-limited analog voice signal and encoding using PCM. While digitization allows wideband voice on the same channel, the improved quality of a wider analog voice channel did not find a large market in the PSTN. 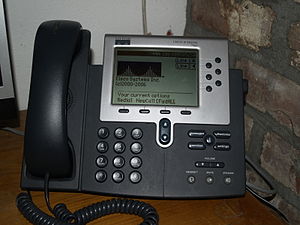 A specialization of digital telephony, Internet Protocol (IP) telephony involves the application of digital networking technology that was the foundation to the Internet to create, transmit, and receive telecommunications sessions over computer networks. Internet telephony is commonly known as voice over Internet Protocol (VoIP), reflecting the principle, but it has been referred with many other terms. VoIP has proven to be a disruptive technology that is rapidly replacing traditional telephone infrastructure technologies. As of January 2005, up to 10% of telephone subscribers in Japan and South Korea have switched to this digital telephone service. A January 2005 Newsweek article suggested that Internet telephony may be "the next big thing".[4] As of 2006, many VoIP companies offer service to consumers and businesses.[needs update]

IP telephony uses an Internet connection and hardware IP phones, analog telephone adapters, or softphone computer applications to transmit conversations encoded as data packets. In addition to replacing plain old telephone service (POTS), IP telephony services compete with mobile phone services by offering free or lower cost connections via WiFi hotspots. VoIP is also used on private networks which may or may not have a connection to the global telephone network. 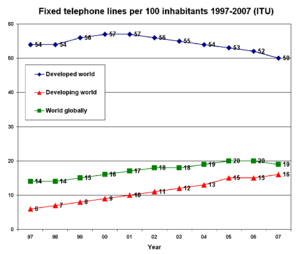 Direct person-to-person communication includes non-verbal cues expressed in facial and other bodily articulation, that cannot be transmitted in traditional voice telephony. Video telephony restores such interactions to varying degrees. Social Context Cues Theory is a model to measure the success of different types of communication in maintaining the non-verbal cues present in face-to-face interactions. The research examines many different cues, such as the physical context, different facial expressions, body movements, tone of voice, touch and smell.

Various communication cues are lost with the usage of the telephone. The communicating parties are not able to identify the body movements, and lack touch and smell. Although this diminished ability to identify social cues is well known, Wiesenfeld, Raghuram, and Garud point out that there is a value and efficiency to the type of communication for different tasks.[citation needed] They examine work places in which different types of communication, such as the telephone, are more useful than face-to-face interaction.

The expansion of communication to mobile telephone service has created a different filter of the social cues than the land-line telephone. The use of instant messaging, such as texting, on mobile telephones has created a sense of community.[citation needed] In The Social Construction of Mobile Telephony it is suggested that each phone call and text message is more than an attempt to converse. Instead, it is a gesture which maintains the social network between family and friends. Although there is a loss of certain social cues through telephones, mobile phones bring new forms of expression of different cues that are understood by different audiences. New language additives attempt to compensate for the inherent lack of non-physical interaction.

Another social theory supported through telephony is the Media Dependency Theory. This theory concludes that people use media or a resource to attain certain goals. This theory states that there is a link between the media, audience, and the large social system.[5] Telephones, depending on the person, help attain certain goals like accessing information, keeping in contact with others, sending quick communication, entertainment, etc.