The borough's major settlement is Telford, a new town designated in the 1960s incorporating the existing towns of Dawley, Madeley, Oakengates and Wellington. The next largest population centre is Newport, a market town to the north of Telford.

Before the creation of The Wrekin district, Telford was a new town run by the Telford Development Corporation (TDC) from the 1960s to the changes in 1974. The district was formed on 1 April 1974, under the Local Government Act 1972, and covered Dawley, Newport, Oakengates and Wellington urban districts, Wellington Rural District and part of Shifnal parish in the Shifnal Rural District.

On 1 April 1998, as a result of the Local Government Commission for England's review, the district became a unitary authority, independent from Shropshire County Council.

All of the council houses previously owned by Wrekin District Council and the subsequent Telford and Wrekin Council were transferred to a newly created Housing Association, the Wrekin Housing Trust, in 1999 which now owns the majority of social housing in Telford.[1]

Telford and Wrekin applied unsuccessfully for City status in 2000, but the district was granted borough status in 2002.

Towns, villages and other settlements 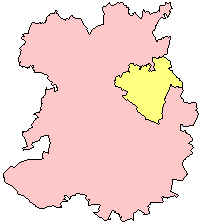 Telford and Wrekin (yellow) in the ceremonial and historic county of Shropshire.

Settlements in Telford and Wrekin -

The borough is divided into 28 civil parishes and these are grouped into three areas: Telford, Newport and Rural.

For the borough council itself there is a system of 34 wards to elect councillors.

Telford and Wrekin operates a cabinet-style council. It has 54 elected councillors who appoint the seven cabinet members, including the leader, each year. The cabinet members make decisions as a whole and meet every two weeks.[2]

Telford and Wrekin is currently a Labour controlled council.

Telford and Wrekin is part of the West Mercia Police police area. The force is based in Worcester (outside Shropshire) and the borough's area is a Territorial Policing Unit in the force's organisation. 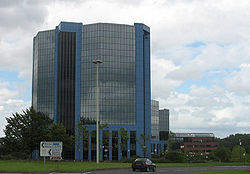 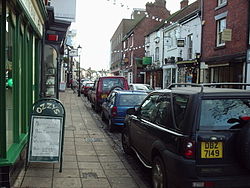 This is a chart of trend of regional gross value added of Telford and Wrekin at current basic prices published (pp. 240–253) by Office for National Statistics with figures in millions of British pounds sterling.