From Infogalactic: the planetary knowledge core
Jump to: navigation, search
This article is about a type of archaeological site. For other uses, see Tell (disambiguation). 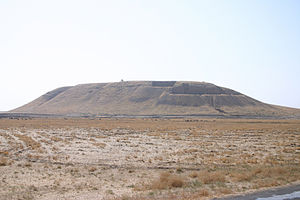 View of Tell Barri (northeastern Syria) from the west

View of the Citadel of Aleppo (northern Syria), built on top of a tell occupied since at least the third millennium BC

A tell, or tel (from Arabic: تَل‎‎, tall,[1] Hebrew: תֵּל,[2]) is a type of archaeological mound created by human occupation and abandonment of a geographical site over many centuries. A classic tell looks like a low, truncated cone with a flat top and sloping sides.[2] The term is mainly used of sites in the Middle East, where it often forms part of the local place name. 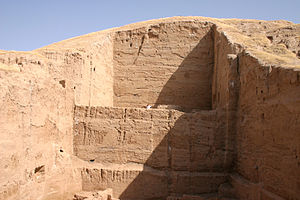 View of an excavation area at Tell Barri (northeastern Syria). Note the person standing in the middle for scale.

A tell is a hill created by many generations of people living and rebuilding on the same spot. Over time, the level rises, forming a mound.[3] The single biggest contributor to the mass of a tell are mud bricks, which disintegrate rapidly. Excavating a tell can reveal buried structures such as government or military buildings, religious shrines and homes, located at different depths depending on their date of use. They often overlap horizontally, vertically, or both. Archaeologists excavate tell sites to interpret architecture, purpose, and date of occupation. Since excavating a tell is a destructive process, physicists and geophysicists have developed non-destructive methods of mapping tell sites.[4]