Tellisford is a village and civil parish 6 miles (10 km) north-east of Frome in the Mendip district of Somerset, England. The parish includes the village of Woolverton.

The village was known as Tefleford in 1001 and Tablesford in 1086 meaning Theabul's ford or ford at a flat place.[2]

The manor was acquired by the Hungerfords of Farleigh Hungerford in the early 15th century who used the fulling mill to endow their chantry chapel. The cloth making industry continuing until 1911.[2]

Tellisford is one of the Thankful Villages which lost no men in World War I.

Tellisford has a Parish Meeting, where all village electors are automatically members. It is required to meet at least twice a year and does not levy a precept.

The village falls within the Non-metropolitan district of Mendip, which was formed on 1 April 1974 under the Local Government Act 1972, having previously been part of Frome Rural District,[4] which is responsible for local planning and building control, local roads, council housing, environmental health, markets and fairs, refuse collection and recycling, cemeteries and crematoria, leisure services, parks, and tourism.

It is also part of the Somerton and Frome county constituency represented in the House of Commons of the Parliament of the United Kingdom. It elects one Member of Parliament (MP) by the first past the post system of election, and part of the South West England constituency of the European Parliament which elects seven MEPs using the d'Hondt method of party-list proportional representation. 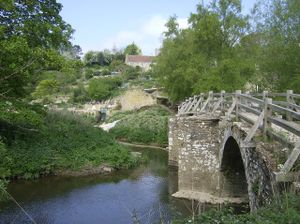 Bridge over the River Frome

There is a weir, and an Environment Agency monitoring station on the River Frome in the village. The bridge, which dates from the 17th century, is a Grade II listed building.[5]

The Church of All Saints dates from the 12th century and is Grade II listed.[6] William Parry was the rector from 1712 until his resignation in 1715.[7]

The Church of St. Lawrence in Woolverton dates from the 14th century.[8]