Telus Corporation (stylized as TELUS) is a Canadian national telecommunications company that provides a wide range of telecommunications products and services including internet access, voice, entertainment, healthcare, video, satellite and IPTV television. The company is based in the Vancouver, British Columbia area; it was originally based in Edmonton, Alberta, before its merger with BCTel in 1999. Telus's wireless division, Telus Mobility, offers CDMA 2000, IDEN, HSPA+, and LTE-based mobile phone networks. Telus is the incumbent local exchange carrier in British Columbia and Alberta, and a major competitive local exchange carrier in Ontario and Quebec.

Telus is a member of the British Columbia Technology Industry Association. Most recently, Telus was one of the founding members of the Canadian Cyber Threat Exchange (CCTX). 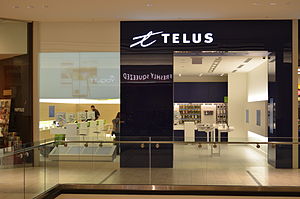 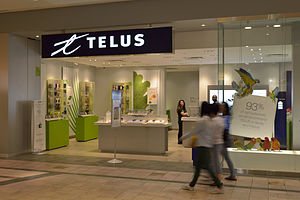 The company was formed in 1990 by the government of Alberta as TELUS Communications, a holding company, in order to facilitate the privatization of a crown corporation, the Alberta Government Telephones Commission (AGT).[3][4][5] In 1995, it acquired Edmonton Telephones Corporation (Ed Tel) from the City of Edmonton[6] making Telus the sole provider of telephone service in the province. In 1996, Telus was introduced to the public as the consumer brand, replacing both AGT and EdTel.[3][7]

In 1998, Telus and BCTel announced a proposed merger.[8] The merger was completed in 1999, with the corporate name slightly modified to Telus Corporation. While the merged company chose to retain the Telus name, it moved its headquarters from Edmonton to Vancouver.[3][9] The merger created Canada's second largest telcom, with 22% of market share compared to Bell Canada's 42%.[9][10][11]

Large swaths of rural Quebec, mainly the Gaspé Peninsula and the north shore, were served from 1927 by an entity known as Corporation de Téléphone et de Pouvoir de Québec, and in 1955, this became known as Québec Téléphone. In 1966, the Anglo-Canadian Telephone Company, a subsidiary of General Telephone and Electronics of Stamford, Connecticut (later GTE), became a majority shareholder in Québec Téléphone. Anglo-Canadian also owned BCTel, and GTE (later merged into Verizon) also owned services in Barbados, Dominican Republic, Jamaica, and Trinidad and Tobago. In 1997, Groupe QuébecTel was established to own Québec Téléphone. Following the merger of BCTel with Telus of Alberta, GTE sold its interests in Québec Téléphone to Telus in August 2000, which renamed it Telus Québec on April 2, 2001.

In late 2004, American telecom Verizon Communications sold its 20.5% stake in Telus. This was so that Verizon could focus more on its own services.[12]

In the 1999-2000 period, Telus acquired the high-performing Scarborough, Ontario based cellular company Clearnet Communications through merger, which gave it a foothold in the highly competitive central Canadian market in Ontario and Quebec, Canada's largest provinces in terms of population. The company had its origins in nearby Pickering, Ontario, and was by 1997 outperforming the other Toronto/Ontario-based cellular companies. Its phones were easily available at various retailers, and its marketing was fresh and innovative at the time, emphasizing bold, uncluttered simplicity (a concept gaining popularity today), and a bright future outlook through its nature and animals motifs.

After the Telus-BCTel merger, unionized employees voted to certify the Telecommunications Workers Union (TWU) as the sole bargaining agent for the expanded company's workforce. The TWU had previously been the union representing BCTel employees - it replaced the International Brotherhood of Electrical Workers (IBEW) in Alberta. A labour dispute between Telus and the TWU began after the previous contract, negotiated with BCTel before the Telus merger, expired at the end of 2000. After Telus made its final offer to the TWU it informed the union of its intention to bring an end to the dispute by unilaterally implementing its April 2005 offer to employees in Alberta and British Columbia. The next day the union went on strike, although (as is common in disputes where an employer attempts to unilaterally implement a new contract) the union consistently referred to the dispute as a "lockout."

On July 25, 2005, Telus blocked its Internet subscribers from accessing a website supporting striking union members. The company expressed concerns over content on the site, saying it identified employees crossing picket lines and encouraged disruptive behaviour,[13] while the union alleged it amounted to censorship.[13][14] The British Columbia Civil Liberties Association issued an official objection to the unilateral blocking on July 26, stating "Telus is leveraging its power as a telecommunications service provider to censor a specific group, shut down debate and limit the messages conveyed about the current labour dispute".[15] An Alberta court injunction ordered the blocked website, Voices For Change, to remove postings of "Telus employee photos" and other "intimidating or threatening material". The site owner agreed to comply and Telus unblocked the website.[16] Telus and the TWU ratified a tentative agreement on November 18, 2005, ending the dispute.[17]

In April 2011, Telus Mobility relaunched the Clearnet brand as a limited market trial in Kelowna, British Columbia, and Red Deer, Alberta. The company again closed to new business in June 2012.

In October 2013, Telus acquired minor mobile phone provider Public Mobile[18] and relaunched it in 2015 as a "value brand" MVNO on the Telus network.[19]

In October 2008, Telus was named one of BC's Top Employers by Mediacorp Canada Inc., which was announced by The Vancouver Sun, The Province and the Victoria Times-Colonist.[20] 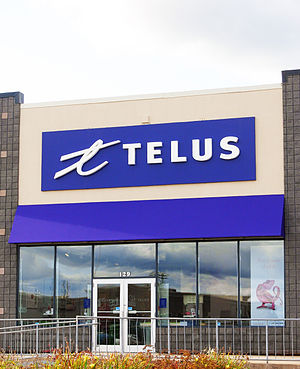 Telus advertising has been noted for its use of whimsical, nature-themed imagery and the slogan, 'The Future is Friendly'. Many of the company's television, outdoor, in-store, and print ads feature animals including pot-bellied pigs, rabbits, a tree frog, a monkey, a lizard, a duck, fish, a hedgehog, a meerkat, an owl, and lately have been focusing on pygmy goats.[32][33] The foundations of the Telus brand originated with Clearnet Communications, including its colours, use of animal motifs and the "the future is friendly" word tag, which was developed and started by Clearnet in the late 1990s. The official Telus colours are green and purple. 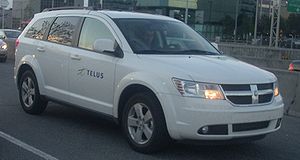 For the Christmas season in 2005, an ad campaign was launched involving a hippopotamus named Hazina from the Greater Vancouver Zoo, accompanied by the song "I Want a Hippopotamus for Christmas". On May 31, 2006, the zoo was formally charged with animal cruelty for their treatment of Hazina.[34][35] Telus spokesman Shawn Hall said Telus was aware that concerns had been raised around Hazina's living conditions, which is why it stipulated that the $10,000 it paid the zoo for using Hazina go directly toward building a new enclosure for her.[36]

Since 2000, Telus and its team members have contributed more than $245 million to charitable and non-profit organizations and volunteered more than 4.1 million hours of service to local communities.[37] Telus sponsors Calgary Science Centre, Science World in Vancouver, and the Odyssium in Edmonton; Both Vancouver and Edmonton science museums were subsequently renamed as Telus World of Science and Calgary was renamed to Telus Spark.[38] Telus funds the annual Kokanee Crankworx freeride mountain bike and World Ski & Snowboard festivals, both held in Whistler, British Columbia.

Telus is also active in sponsoring sports teams and organizations. Most notably, Telus has been a premier sponsor and marketing partner of Hockey Canada since 2004 and the title sponsor of Canada's national midget hockey championship, the Telus Cup, since 2005.[39] Telus has been a sponsor of Rogers Sportsnet's regional broadcasts of Calgary Flames and Edmonton Oilers games. Telus is active in Canadian professional golf as title sponsor of the Telus Open and the Telus Skins Game. In baseball, the naming rights to Telus Field, the home of the Edmonton Capitals of the independent North American League, currently belong to Telus.

Telus is the namesake tenant in several office buildings, including The Telus Convention Centre in Calgary, Tour Telus in Montreal, Telus Plaza in Edmonton and Telus House in Toronto.