From Infogalactic: the planetary knowledge core
Jump to: navigation, search
For other uses, see Tenebrae (disambiguation). 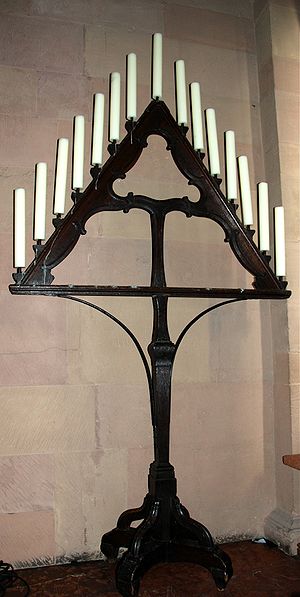 Fifteen candles on tenebrae "hearse", at Mainz Cathedral. The candles are extinguished one by one during the course of the service.

Tenebrae (Latin for "shadows" or "darkness") is a Christian religious service celebrated in the Holy Week within Western Christianity, on the evening before or early morning of Maundy Thursday, Good Friday, and Holy Saturday. Tenebrae is distinctive for its gradual extinguishing of candles while a series of readings and psalms is chanted or recited.

The Roman rite of Tenebrae was widely observed in the Catholic Church, until liturgical reforms in the second half of the 20th century diminished the practice. Tenebrae liturgy traditions also exist in Anglicanism, Protestantism, and Western Rite Orthodoxy.

In the Roman Catholic Church, "tenebrae" is the name given to the celebration, with special ceremonies, of Matins and Lauds, the first two hours of the Divine Office, of the last three days of Holy Week. The traditions regarding this service go back at least to the ninth century.[1] Originally celebrated after midnight, by the late Middle Ages their celebration was anticipated on the afternoon or evening of the preceding day in most places.[2]

The celebration of Matins and Lauds of these days in the form referred to as Tenebrae in churches with a sufficient number of clergy was universal in the Roman Rite until the reform of the Holy Week ceremonies by Pope Pius XII in 1955. At that time, the Easter Vigil was restored as a night office, moving that Easter liturgy from Holy Saturday morning to the following night; the principal liturgies of Holy Thursday and Good Friday were likewise moved from morning to afternoon or evening, and thus Matins and Lauds were no longer allowed to be anticipated on the preceding evening, except for the Matins and Lauds of Holy Thursday in the case of cathedral churches in which the Mass of the Chrism was held on Holy Thursday morning.[3]

The 1960 Code of Rubrics, which is incorporated in the 1962 typical edition of the Roman Breviary, did not allow any anticipation of Lauds, though Matins can still be anticipated to the day before, later than the hour of Vespers.[4] Even at the Church of the Holy Sepulchre in Jerusalem, where the need to observe a timetable that did not disturb the established rights of other churches forced the timetable of Roman Catholic Holy Week services to remain unchanged, the Office of Tenebrae was abandoned in 1977.[5]

Description of the pre-Vatican II liturgy

The structure of Tenebrae is the same for all three days. The first part of the service is Matins, which in its pre-1970 form is composed of three nocturns, each consisting of three psalms, a short versicle and response, a silent Pater Noster, and three readings ("lessons"), each followed by a responsory. Pre-1970 Lauds consists of five psalms, a short versicle and response, and the Benedictus Gospel canticle, followed by Christus factus est, a silent Pater Noster, a devotional recitation of Psalm 50 (51), Miserere, and the appointed collect.

The principal Tenebrae ceremony is the gradual extinguishing of candles upon a stand in the sanctuary called a hearse.[6] Eventually, the Roman Rite settled on fifteen candles, one of which is extinguished after each of the nine psalms of Matins and the five of Lauds, gradually reducing the lighting throughout the service. The six altar candles are put out during the Benedictus, and then any remaining lights in the church. The last candle is hidden beneath the altar, ending the service in total darkness. The strepitus (Latin for "great noise"), made by slamming a book shut, banging a hymnal or breviary against the pew, or stomping on the floor, symbolizes the earthquake that followed Christ's death, although it may have originated as a simple signal to depart.[7] After the candle has been shown to the people, it is extinguished, and then put "on the credence table," or simply taken to the sacristy. All rise and then leave in silence.[8]

The lessons of the first nocturn at Matins are taken from the Book of Lamentations and are sung to a specific Gregorian reciting tone.[11] Lamentations of Jeremiah the Prophet have been set to music by many composers, including Palestrina, Tallis and Lassus. Such High-Renaissance polyphonic choral settings of Lamentations at Tenebrae, culminating in those of Lassus (1584), share the same texts with, but in musical idiom are to be distinguished from, the French Baroque genre of Leçons de ténèbres, as composed by Marc-Antoine Charpentier and François Couperin. In the 20th century Ernst Krenek wrote a Lamentatio Jeremiae prophetae, Op. 93.

The lessons of the second nocturn are taken from the writings of St. Augustine, and the lessons of the third nocturn from the Epistles. These are chanted to the ordinary lesson tone and have been relatively neglected by composers, though there are a few settings by Manuel Cardoso. The Tenebrae responsories have been set by, among others, Lassus, Gesualdo, Victoria, Marc-Antoine Charpentier and Jan Dismas Zelenka. Gregorio Allegri's setting of the Miserere psalm, to be sung at the Tenebrae Lauds, is one of the best known compositions for the service. Also Gesualdo includes a setting of that psalm in his Responsoria et alia ad Officium Hebdomadae Sanctae spectantia, along with a setting of the Benedictus.

The content, ceremony, and time of this celebration vary widely. The special rubrics of Tenebrae that once accompanied the celebration of Matins and Lauds, including the ceremony of extinguishing the candles on the hearse, are more recently sometimes applied to other celebrations, even if these do not consist of a nine-psalm Matins and a five-psalm Lauds. Summorum Pontificum (2007) permits clerics bound to the recitation of the Divine Office to use the 1962 Roman Breviary, a permission availed of by several religious and secular institutes and societies of apostolic life; but the 1955 and 1960 changes exclude the anticipation of Matins and Lauds to the previous evening, whether celebrated with or without the Tenebrae ceremonies. However, some places hold something similar to the original Tenebrae celebration as an extra-liturgical, devotional service.

File:Front Side of Good Friday Church Bulletin (Faith Lutheran Church).jpg
The front cover of a Lutheran church bulletin for Good Friday, describing the significance, as well as the summary of components, of a typical tenebrae service.

Some Protestant denominations retained elements of the Roman Tenebrae liturgy, or added others. The name "tenebrae" can be given to various Holy Week services held by Protestant churches including the Lutheran, United Methodist, United Church of Christ and Presbyterian churches. Some liturgical Baptist congregations also hold Tenebrae Services.[15] Variations of Tenebrae are sometimes celebrated in less formal or non-denominational churches as well.

Protestant versions of Tenebrae service, particularly on Maundy Thursday or Good Friday,[16] often contain readings from the gospels which describe the time between the Last Supper and the Passion of Christ. Another frequent element in Protestant Tenebrae services is the inclusion of the last seven sayings of Jesus, assembled from the various gospel accounts.[17][18]

Some churches have the people who read scripture snuff out candles and/or drape black cloth over church furnishings and ornamentation when they finish their passage to represent the flight of the disciples and the approach of the dark hate of Jesus' enemies and the Passion of Christ. When the last passage has been read the church or room is completely dark and recalls the days when Jesus was in the tomb. When this is the case, someone such as an acolyte often comes forward and relights a single candle to represent the hope of the prophecy of Easter.

Another alternative is the service above interwoven in a Last Supper with lamb meat, bitter herbs, and other elements of the Jewish Passover commemoration. Sometimes Protestant Tenebrae services involve the participants receiving Communion. When this is the case, some churches have the participants come up front and sit at a table in groups of twelve to receive communion.

Some Tenebrae responsory settings led their own life in Protestant practice, for instance:

Some churches of the Anglican Communion celebrate Tenebrae with the same rite as Roman Catholics. Anglicans, including the American Episcopal Church, usually observe the service on Wednesday in Holy Week, thereby preserving the importance of the Maundy Thursday and Good Friday observances. The Episcopal Church provides a single Tenebrae service on Wednesday evening, the day before Maundy Thursday. That service reduces the total number of Tenebrae lessons, each followed by a responsory, to nine.[21]

The Polish National Catholic service usually takes place on Good Friday, mostly at night. A standing cross is put on the altar with a black veil over it and 12 to 14 candles are placed behind it. The service has a combination of Bitter Lamentations, Matins, and Vespers. Several of the PNCC clergy, vested with cantors, are seated at the high place and the service is chanted. Gradually a minor cleric puts out each candle except for the top one that is taken around the sanctuary into the vestry. At that time a moment of silence is held for Christ's death. Then the candle is placed back; the lights in the church are turned back on; and the final hymns are sung.

Some Western Rite Orthodox parishes observe the service of Tenebrae. Among some of the Byzantine Rite Orthodox there is an external similarity in that at Matins of Great Friday a candlestick with 12 candles is set up in the center of the temple behind the analogion from which the Twelve Passion Gospels are read. After each reading one of the candles is extinguished.