Tengrism, also known as Tengriism or Tengrianism, is a Central Asian religion characterized by shamanism, animism, totemism, poly- and monotheism[1][2][3] and ancestor worship. It was the prevailing religion of the Turks, Mongols, Hungarians, Xiongnu and Huns,[4][5] and the religion of the five ancient Turkic states: Göktürk Khaganate, Western Turkic Khaganate, Great Bulgaria, Bulgarian Empire and Eastern Tourkia (Khazaria). In Irk Bitig, Tengri is mentioned as Türük Tängrisi (God of Turks).[6]

Tengrism has been advocated in intellectual circles of the Turkic nations of Central Asia (including Tatarstan, Buryatia, Kyrgyzstan and Kazakhstan) since the dissolution of the Soviet Union during the 1990s.[7] Still practiced, it is undergoing an organized revival in Sakha, Khakassia, Tuva and other Turkic nations in Siberia. Burkhanism, a movement similar to Tengrism, is concentrated in Altay.

Khukh tengri means "blue sky" in Mongolian, Mongolians still pray to Munkh Khukh Tengri ("Eternal Blue Sky") and Mongolia is sometimes poetically called the "Land of Eternal Blue Sky" (Munkh Khukh Tengriin Oron) by its inhabitants. In modern Turkey, Tengrism is known as the Göktanrı dini ("Sky God religion");[8] the Turkish "Gök" (sky) and "Tanrı" (God) correspond to the Mongolian khukh (blue) and Tengri (sky), respectively. According to Hungarian archaeological research, the religion of the Hungarians until the end of the 10th century (before Christianity) was Tengrism.[9]

Kırk banyosu, the good fortune-bringing "bath of 40" pebbles collected from forty separate places, together with a gold coin, performed in Turkey 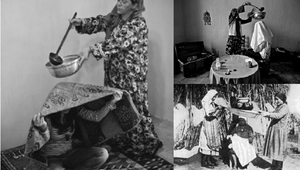 Tengrists view their existence as sustained by the eternal blue sky (Tengri), the fertile mother-earth spirit (Eje) and a ruler regarded as the holy spirit of the sky. Heaven, earth, spirits of nature and ancestors provide for every need and protect all humans. By living an upright, respectful life, a human will keep his world in balance and perfect his personal (Wind Horse). The Huns of the northern Caucasus reportedly believed in two gods: Tangri Han (or Tengri Khan), considered identical to the Persian Aspandiat and for whom horses were sacrificed, and Kuar (whose victims are struck by lightning).[5] Tengrism is practised in Sakha, Buryatia, Tuva and Mongolia in parallel with Tibetan Buddhism and Burkhanism.[11]

Kyrgyz means "we are forty" in the Kyrgyz language, and Kyrgyzstan's flag has 40 uniformly-spaced rays. Tengrist Khazars aided Heraclius by reportedly sending 40,000 soldiers during a joint Byzantine-Göktürk operation against the Persians.

Articles on Tengrism have been published in social-scientific journals in Kyrgyzstan and Kazakhstan. Kazakhstan President Nursultan Nazarbayev and former Kyrgyz president Askar Akayev have called Tengrism the national, "natural" religion of the Turkic peoples.[citation needed]

Flag of the Sakha Republic 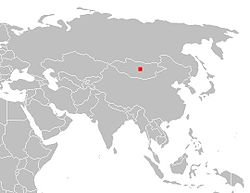 Otukan is the home of Tengri and capital city of the Turks in Irk Bitig.

Turkish coin
The tree of life on a flag and coin

Tengrism was brought to Eastern Europe by the early Huns and Bulgars.[13] It lost importance when the Uighuric kagans proclaimed Manichaeism the state religion in the eighth century.[14]

Tengrism also played a large role in the religion of the Gok-Turk and Mongol Empires. Gok-Turk translates as "celestial Turk". Genghis Khan and several generations of his followers were Tengrian believers until his fifth-generation descendant, Uzbeg Khan, turned to Islam in the 14th century.

The original Mongol khans, followers of Tengri, were known for their tolerance of other religions.[15] Möngke Khan, the fourth Great Khan of the Mongol Empire, said: "We believe that there is only one God, by whom we live and by whom we die, and for whom we have an upright heart. But as God gives us the different fingers of the hand, so he gives to men diverse ways to approach him." ("Account of the Mongols. Diary of William Rubruck", religious debate in court documented by William of Rubruck on May 31, 1254).

A revival of Tengrism has played a role in Central Asian Turkic nationalism since the 1990s. It developed in Tatarstan, where the Tengrist periodical Bizneng-Yul appeared in 1997. The movement spread during the 2000s to Kyrgyzstan and Kazakhstan and, to a lesser extent, Buryatia and Mongolia.[citation needed]

Since the 1990s, Russian-language literature uses Тенгрианство ("Tengrism" or "Tengrinity") in the general sense of Mongolian shamanism. Buryat scholar Irina S. Urbanaeva developed a theory of Tengrianist esoteric traditions in Central Asia after the collapse of the Soviet Union and the revival of national sentiment in the former Soviet republics of Central Asia.[16]

Although Tengrism has few active adherents, its revival of a national religion reached a larger audience in intellectual circles. Presenting Islam as foreign to the Turkic peoples, adherents are found primarily among the nationalistic parties of Central Asia. Tengrism may be interpreted as a Turkic version of Russian neopaganism. A related phenomenon is the revival of Zoroastrianism in Tajikistan.[citation needed]

By 2006, a Tengrist society in Bishkek, an "international scientific centre of Tengrist studies" and a civic group (Tengir Ordo, the "army of Tengri") were established by Kyrgyz businessman and politician Dastan Sarygulov. His ideology incorporated ethnocentrism and Pan-Turkism, but did not receive strong support. After the Kyrgyzstani presidential elections of 2005, Sarygulov became state secretary and set up a work group dealing with ideological issues.[17] Another Kyrgyz proponent of Tengrism, Kubanychbek Tezekbaev, was prosecuted for inciting religious and ethnic hatred in 2011 with statements in an interview describing Kyrgyz mullahs as "former alcoholics and murderers".[18] 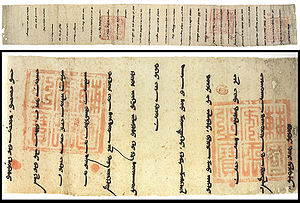 Arghun Khan's 1289 letter to Philip the Fair, in classical Mongolian script. The letter was given to the French king by Buscarel of Gisolfe.

Arghun expressed the association of Tengri with imperial legitimacy and military success. The majesty (suu) of the khan is a divine stamp granted by Tengri to a chosen individual through which Tengri controls the world order (the presence of Tengri in the khan). In this letter, "Tengri" or "Mongke Tengri" ("Eternal Heaven") is at the top of the sentence. In the middle of the magnified section, the phrase Tengri-yin Kuchin ("Power of Tengri") forms a pause before it is followed by the phrase Khagan-u Suu ("Majesty of the Khan"):

Under the Power of the Eternal Tengri. Under the Majesty of the Khan (Kublai Khan). Arghun Our word. To the Ired Farans (King of France). Last year you sent your ambassadors led by Mar Bar Sawma telling Us: "if the soldiers of the Il-Khan ride in the direction of Misir (Egypt) we ourselves will ride from here and join you", which words We have approved and said (in reply) "praying to Tengri (Heaven) We will ride on the last month of winter on the year of the tiger and descend on Dimisq (Damascus) on the 15th of the first month of spring." Now, if, being true to your words, you send your soldiers at the appointed time and, worshipping Tengri, we conquer those citizens (of Damascus together), We will give you Orislim (Jerusalem). How can it be appropriate if you were to start amassing your soldiers later than the appointed time and appointment? What would be the use of regretting afterwards? Also, if, adding any additional messages, you let your ambassadors fly (to Us) on wings, sending Us luxuries, falcons, whatever precious articles and beasts there are from the land of the Franks, the Power of Tengri (Tengri-yin Kuchin) and the Majesty of the Khan (Khagan-u Suu) only knows how We will treat you favorably. With these words We have sent Muskeril (Buscarello) the Khorchi. Our writing was written while We were at Khondlon on the sixth khuuchid (6th day of the old moon) of the first month of summer on the year of the cow.[citation needed]

Arghun expressed Tengrism's non-dogmatic side. The name Mongke Tengri ("Eternal Tengri") is at the top of the sentence in this letter to Pope Nicholas IV, in accordance with Mongolian Tengriist writing rules):

... Your saying "May [the Ilkhan] receive silam (baptism)" is legitimate. We say: "We the descendants of Genghis Khan, keeping our own proper Mongol identity, whether some receive silam or some don't, that is only for Eternal Tengri (Heaven) to know (decide)." People who have received silam and who, like you, have a truly honest heart and are pure, do not act against the religion and orders of the Eternal Tengri and of Misiqa (Messiah or Christ). Regarding the other peoples, those who, forgetting the Eternal Tengri and disobeying him, are lying and stealing, are there not many of them? Now, you say that we have not received silam, you are offended and harbor thoughts of discontent. [But] if one prays to Eternal Tengri and carries righteous thoughts, it is as much as if he had received silam. We have written our letter in the year of the tiger, the fifth of the new moon of the first summer month (May 14th, 1290), when we were in Urumi.[citation needed]

Turkish worship of Tengri was mocked by the Muslim Turk Mahmud al-Kashgari, who wrote: "The infidels - may God destroy them!"[19][20] According to Kashgari, Muhammad assisted in a miraculous event where 700,000 Yabāqu infidels were defeated by 40,000 Muslims led by Arslān Tegīn; fires shot sparks at the Yabāqu from gates on a green mountain[21] (the Yabaqu were a Turkic people).[22]

Tengrism has been called Nestorianism by Christian sources.[23][additional citation needed] Turkish Nestorian manuscripts with the same rune-like characters as Old Turkic script have been found in the oasis of Turfan and the fortress of Miran.[24][25][26] It is unknown when and by whom the Bible was first translated into Turkish.[27] Most records in pre-Islamic Central Asia are written in the Old Turkic language.[28] Nestorian Christianity had followers among the Uighurs. In the Nestorian sites of Turfan, a fresco depicting Palm Sunday has been discovered.[29]