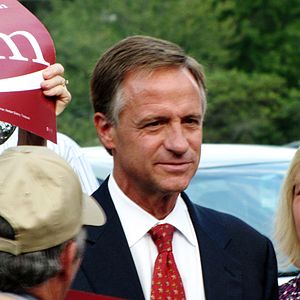 Upon its entry into the Union in 1796 Tennessee was strongly Democratic-Republican. Tennessee became a two-party system for more than 20 years during the Jacksonian era. The Democratic Party was formed by Jackson followers and this party was dominant against the rival Republican Party created by John Quincy Adams. But in 1835, there was a turn in power of party and a Whig governor was elected. Tennessee after the Civil War was part of the Democratic South for about a century. East Tennessee however remained strongly Republican. Even though the state was predominantly Democratic two different presidential elections won the state of Tennessee in 1920 and 1928. In the 1960s and 1970s Republicans made a push into the Democratic power when in 1966, Howard Baker was elected US senator. Then again Republicans made another push, when Winfield Dunn was elected governor, the first Republican Governor in over 50 years.[1]

Republicans won a historic victory in Tennessee's 2008 elections, when the party won majorities in both houses of the Tennessee General Assembly for the first time since the Reconstruction Era election of 1868. Smith was unanimously re-elected at the end of 2008 to a full two-year term as chairman for calendar years 2009 and 2010. In April 2009, Smith announced her resignation in order to run for Congress in Tennessee's 3rd congressional district in the August 2010 Republican primary.[4]

Elected officers of the state committee

The state executive committee (SEC) operates as the governing body for the state party. They establish rules and measures that best promote the success of the Republican Party and broadening of its base. The SEC serves as the TRP's state primary board and establishes to guide and direct County Republican Parties. One man and one woman are elected from each state senate district.[9]

In the 2000 presidential election the Republicans wanted to embarrass the Tennessee native and president hopeful Al Gore in his home state. The strategy that he Republicans used was to portray Gore as an outsider that lost contact with the "Volunteer State" and that his views differed from before. The National Rifle Association joined the fight against Gore when they started to campaign for GOP and posted pro-George W. Bush billboards along the streets and highways. Throughout the campaign it was a dog fight but in the end the Republican Party had won Tennessee. 2,076,155 voters turned out in Tennessee and Bush won with 51.1% of the popular vote.[10]

In 2008 the Republican won a historic victory, when the party own majorities in both houses of the Tennessee General Assembly for the first time since the reconstruction era election of 1868.[17]

Like other Southern states, before 1960s Tennessee was a solid state of the Democratic Party. Since 1972 the Republican Party has won Tennessee in 7 out of 11 elections. It won Tennessee only except 1976, 1992 and 1996.