Tenth Presbyterian Church is a congregation of approximately 1,500 members[citation needed] located in downtown Philadelphia, Pennsylvania, United States. Tenth is affiliated with the Presbyterian Church in America (PCA), a denomination in the Reformed and Calvinist traditions.[2] It is located at the southwest corner of 17th & Spruce Streets in Philadelphia's Rittenhouse Square neighborhood, in the southwestern quadrant of Center City.

West Spruce Street/Tenth Church was designed by architect John McArthur, Jr., who was a member of the congregation. Its 250-foot (76 m) tower-and-spire was the tallest structure in Philadelphia from 1856 to the erection of the North American Building in 1900. McArthur later designed Philadelphia City Hall. In 1893, architect Frank Miles Day was hired to perform major alterations to the church's exterior and interior decoration. The church's steeple and the 150-foot wooden spire, once the tallest structure in Philadelphia until the new City Hall (designed by McArthur as well) was built in 1901, collapsed due to structural decay and was removed in 1912. 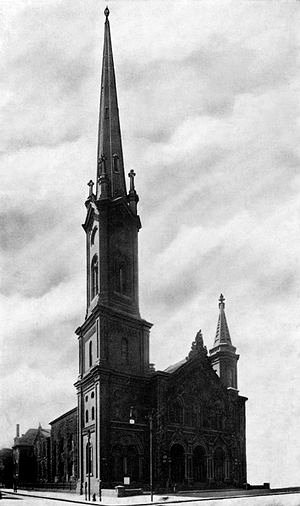 Tenth Church before the removal of the spires in 1912

Under James Montgomery Boice pastorate Tenth Pres grew from 350 members to a congreagtion over 1,200.[5]

After a lengthy property battle the congregation was allowed to leave the denomination with keeping its Byzantine style property. Tenth Presbyterian remain the "big-steeple" PCA congregation in the northeast United States. The church sponsors an extensive global missions program, an outreach to the neighborhood includes a strong connection to the rising generation of doctors attending the medical schools in the neighborhood.[7]

Some notable staff members of the church from its founding include:

Notable members have included C. Everett Koop, Surgeon General of the United States during the Reagan administration and one-time head of Pediatrics at the University of Pennsylvania and Children's Hospital of Philadelphia.