From Infogalactic: the planetary knowledge core
(Redirected from Tepee)
Jump to: navigation, search
For other uses, see Tipi (disambiguation). 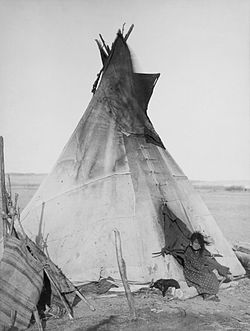 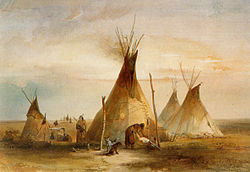 A tipi[1] (also tepee[2] or teepee[3][4]) is a conical tent, traditionally made of animal skins upon wooden poles. A tipi is distinguished from other conical tents by the smoke flaps at the top of the structure.[5][6][7] Historically, the tipi was designed and largely used by Indigenous people of the Plains in the Great Plains and Canadian Prairies of North America.[8][9][10] Tipi lodges are still in use by these peoples, though now primarily for ceremonial purposes.

Tipis are stereotypically and incorrectly associated with all Native Americans in the United States and Aboriginal people in Canada, despite their usage being unique to the peoples of the Plains. Native American tribes and First Nation band governments from other regions have used other types of dwellings.[1][note 1] The tipi is durable,[11] provides warmth and comfort in winter,[12] is cool in the heat of summer,[note 2] and is dry during heavy rains.[13][14] Tipis can be disassembled and packed away quickly when people need to relocate and can be reconstructed quickly upon settling in a new area.[15][16][note 3] Historically, this portability was important to Plains Indians with their at times nomadic lifestyle.[17]

The word tipi comes into English from the Lakota language.[18] The Lakota word thípi [ˈtʰipi] means "a dwelling" or "they dwell", from the verb thí, meaning "to dwell".[19]

The wigwam, a shelter typically made of bark layered on a pole-structure, was also used by various tribes, especially for hunting camps.[20][21] The term wigwam has often been incorrectly used to refer to a conical skin tipi.[22][note 4] 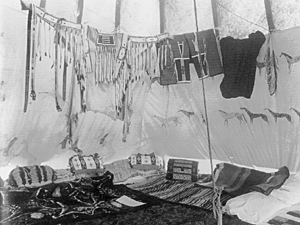 Crow lodge interior, 1907, showing the poles and outer skin at the top, the inner lining and bedding. The lashing rope is tied off to a wooden stake at the bottom of the photograph. Clothing is suspended on a line tied between two of the tipi poles.

A typical family tipi is a conical, portable structure with two adjustable smoke flaps, multiple poles (historically from 12 to 25 feet long) called lodge poles.[note 5] Lodgepole pine is the preferred wood in the Northern and Central Plains and red cedar in the Southern Plains.[23] Tipis have a detachable cover over the structure. The cover historically used buffalo skins; an optional skin/cloth lining; and a canvas or bison calf skin (historically) door. There may also be an optional, partial interior ceiling, called an ozan in Lakota, that covers sleepers and protects them from rain.[24][25][note 6]

Ropes (historically raw hide) and wooden pegs are required to bind the poles, close the cover, attach the lining and door, and anchor the resulting structure to the ground. Tipis are distinguished from other tents by two crucial elements: the opening at the top and the smoke flaps, which allow the dweller to cook and heat themselves with an open fire, and the lining that is primarily used in the winter, which insulates. A lining or as it is called by the Sioux, ozan, is not needed for having a fire. The door opening, smoke flaps, and some air that gets in from under the cover contribute to the fire. Tipis were designed to be easily set up or taken down to allow camps to be moved to follow game migrations, especially the bison. When dismantled the tipi poles were used to construct a dog- or later horse-pulled travois on which additional poles and tipi cover were placed.[1]

Tipi covers are made by sewing together strips of canvas or tanned bison hide (historically) and cutting out a semicircular shape from the resulting surface. Trimming this shape yields a door and the smoke flaps that allow the dwellers to control the chimney effect to expel smoke from their fires. Old style traditional linings were hides, blankets, and rectangular pieces of cloth hanging about four to five feet above the ground tied to the poles or a rope.[5] Today's modern lining is the most difficult element to measure, since it consists of trapezoid-shaped strips of canvas assembled to form the shape of a truncated cone. The poles, made of peeled, polished and dried tapering saplings (historically lodgepole pine), are cut to measure about six feet more than the radius of the cover. 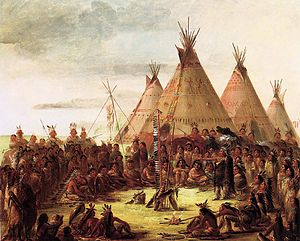 The construction of a tipi starts with tying together three of the poles at the skin's radius from their bases using a tripod lashing. The tipis of the Blackfoot of Southern Canada and Northern Montana are distinguishable from other plains tribes by the tying of four poles. One end of this lashing rope is left dangling from the tie-point, long enough to reach the base of the poles. These tripod poles are stood upright, with their unfastened ends spaced apart on the ground to form a triangle, each pole's base the skin's radius from its neighbors. A dozen more long poles are laid onto the three primary poles. Their upper ends rest on the lashing of the first three, and the lower ends are evenly spaced to form a circle on the ground which includes the original three poles. The lashing rope is then walked around the whole structure three times and pulled tight. This ties the placed poles to the tripod at the crown of the tipi. The canvas skin is tied to another pole, lifted up and the top of the pole is rested where all the poles meet. The skin is pulled around the pole framework. The overlap seam is closed with wooden lacing pins which are thin sticks about 10 inches long with one or both ends tapered. Sometimes a door is attached to one of the bottom lacing pins. In old tipis of hide or early cloth, the door was where the two sides came together in the front. A blanket, hide or cloth door was put over the opening to secure the entrance.

Tipi at a living history rendezvous

The base of the skin is pegged to the ground. Traditionally pegs were placed in slits at the bottom of the cover. As canvas or cloth came into use loops were sewn into the bottom or, in an emergency smooth pebbles were pushed into the cloth and a cord tied between the bulge of cloth and a wooden peg in the ground. A gap can be allowed at ground level for airflow in warm seasons and the base is completely closed to the ground in cooler times. The bases of the non-tripod poles are moved in or out to tension the skin. Inside the tipi, a cord is wrapped from pole to pole above head height. An inner lining can be suspended from this cord and pushed back on the ground near the inside base of the poles. Bedding and personal items are pushed against the liner to keep it in place. The inner lining acts as a heat insulator and draft and pest excluder. An interior awning which prevents rain drops from hitting bedding can be suspended at the top of the lining.

Tipi outside the Royal Military College of Canada 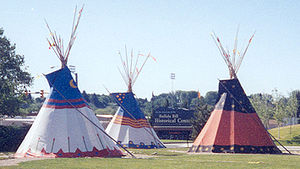 A small fire could be set in the center of the floor for heat and cooking. The smoke would exit the top of the tipi which is guarded by two adjustable smoke flaps set at right angles to the wind to prevent a downdraft. A draft rising between the cover and the lining adds to the chimney effect and helps carry the smoke up and out. The liner does add insulation in very cold weather when stuffed with grass and can direct the draft upwards and away from the occupants while still admitting fresh air. Air for combustion can be ducted to the fire through a buried pipe when the tipi is closed tightly against inclement weather.

In most weather the lining may not be used, and the cover can be rolled up on very hot days a few feet on one or two sides allowing any small breeze to create ventilation.

This structure requires a hole in the middle of the roof, and thus may not be the best shelter in times of intense rain, but there are strategies to reduce the problem. A hide or fabric ceiling can protect against dripping water and reduce drafts. This ceiling, when used, typically only covers the back half of the tipi and is slanted slightly upwards to the front, draining water to the rear and allowing smoke from fire to vent out of the top of the tipi. Small sticks between the lining rope and the poles can create a gap for rainwater running down the poles to reach the ground without being caught by and dripping off the lining rope. Contemporary tipi dwellers may tie a bucket beneath the crown, or install rubber barriers on the poles and a canvas rain catcher which drains from the crown to the outside, to collect rain dripping off the crown of the poles. A fabric or hide rain cap can be placed over the top of the tipi if the poles are not too long but can cause serious damage in high winds. Historically these types of coverings were not used.

In strong winds the lashing rope is pegged to the ground behind the fire. This helps to keep the tipi poles from “walking”, lifting up under the force of the wind on the skin and coming down in a new position. In extreme winds the bases of the poles can be individually lashed to pegs. A tipi which is pegged and has had its lashing rope tied down is a remarkably wind-resistant cone.

Historically, most tipis in a village would not be painted. Painted tipis often depicted noted historical battles and often featured geometric portrayals of celestial bodies and animal designs. Sometimes tipis have been painted to depict personal experiences, such as war, hunting, a dream or vision. When depicting visions, "ceremonies and prayers were first offered, and then the dreamer recounted his dream to the priests and wise men of the community. Those known to be skilled painters were consulted, and the new design was made to fit anonymously within the traditional framework of the tribe's painted tipis."[26]

Historically the bison skin cover of the family was richly painted and drawn upon, mostly with images of the deeds of the owner or owners and of sacred religious symbols, as evidenced in historical accounts (from the 16th century until the 19th century), Plains warriors' Ledger art paintings from the 19th century, and anthropological studies.

Many tipis, including those of the Cheyenne, Sioux, Arapaho, Kiowa, and other Plains tribes, are decorated with pendants and colored medallions. Traditionally these consisted of quillwork designs; more modern versions are often beaded. Buffalo horns and tails, tufts of buffalo and horse hair, bear claws and buckskin fringe have also been used to decorate tipi covers.