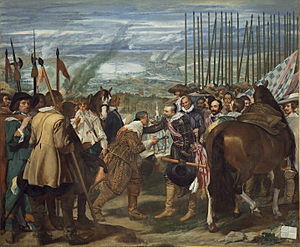 Surrender of Breda by Velázquez, shows Ambrosio Spinola, commander of the Spanish tercio receiving the keys to the city from the defeated Dutch general in 1625.

The tercio (Spanish pronunciation: [ˈterθjo] "third") or tercio español ("Spanish third") was a Spanish military unit of the Spanish Empire during the era of the dominance of Habsburg Spain in Europe and the Renaissance era. 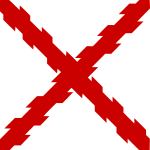 The tercio was an infantry formation made up of pikemen, swordsmen and arquebusiers or musketeers in a mutually supportive formation, that in theory was up to 3,000 soldiers, although it was usually less than half this size. It was also sometimes referred to as the Spanish Square in other countries and the formation was also much used by other powers, especially the Imperial Army of the Holy Roman Empire.

The care that was taken to maintain a high number of "old soldiers" (veterans) in the units, and their professional training, together with the particular personality imprinted on them by the proud hidalgos of the lower nobility that nurtured them, made the tercios for a century and a half the best infantry in Europe. Moreover, the tercios were the first to efficiently mix pikes and firearms. The formation dominated European battlefields in the sixteenth century and the first half of the seventeenth century and is seen by historians as a major development of Early Modern combined arms warfare. 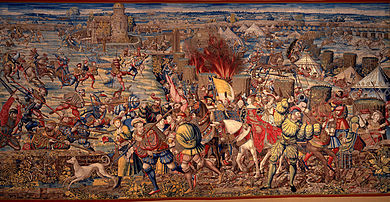 The tercio was the product of the Italian Wars, in which the Spanish general, Gonzalo Fernández de Córdoba, called "the great captain", reorganized the Spanish army throughout a series of conflicts at the end of the 15th century and early 16th century, into a tactically unique combination of combined arms centered around armored infantry.[1] To counter the French heavy cavalry a unit called a colunella ("colonelcy"), commanded by a colonel, was created. A colonelcy could theoretically have up to 6,000 men but by 1534 this had been reduced to the tercio with a maximum of 3,000, for increased mobility on the offense.[2] Armies using tercios generally intended to field them in brigades of at least three, with one tercio in the front and two behind, the rearward formations echeloned off on either side so that all three resembled a stepped pyramid, hence the name tercio, which means "one third" (that is, one third of the whole brigade or battle group). The Spanish Third never had more than 1500 men, neither at the first time. This unit was called the "Third" because it uses 1/3 pikemen, 1/3 swordsmen, and 1/3 of firearms. The only Tercio to have 3,000 men was "The Galleys' Tercio" (Tercio de Galeras), dedicated only for galleys and galleons and specialized in naval warfare and landing operations, assigned in 1537 by Royal assent to the Spanish Navy to be in permanent service. It is the proud ancestor of today's Spanish Navy Marines.

A tercio in "bastioned square," in battle.

Although other powers adopted the tercio formation, their armies fell short of the fearsome reputation of the Spanish, who possessed a core of professional soldiers, which gave them an edge that was hard for other states to match.[3] That army was further supplemented by "an army of different nations", a reference to the fact that many of the troops were mercenaries from Germany (Landsknecht), and the Italian and Walloon territories of the Spanish Netherlands, as was characteristic of European warfare before the levies of the Napoleonic Wars. In the 16th and 17th centuries however, the core of Spanish armies were formed by Spanish subjects, who were frequently praised by others for their cohesiveness, superiority in discipline and overall professionalism.[4] 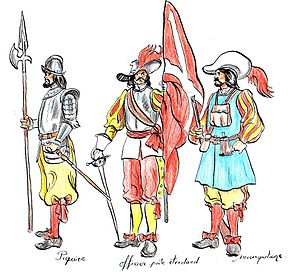 Within the tercio, ranks of pikemen arrayed themselves together into a hollow square (cuadro) pike square with swordsmen – typically equipped with a short sword, a buckler, and javelins – inside; as the firearm rose in prominence, the swordsmen declined and were phased out. The arquebusiers (later, musketeers) were usually split up in several mobile groups called sleeves (mangas) and deployed relative to the cuadro, typically with one manga at each corner.[citation needed] By virtue of this combined-arms approach, the formation simultaneously enjoyed the staying power of its pike-armed infantry, the ranged firepower of its arquebusiers, as well as the ability to conduct assaults with sword-and-buckler men. In addition to its inherent ability to repulse cavalry and other units along its front, the long-range firepower of its arquebusiers could also be easily reorganized to the flanks, making it versatile in both offensive and defensive evolutions, as demonstrated by the success of the tercios at the Battle of Pavia (1525).

Groups of tercios were typically arrayed in dragon-toothed formation (staggered—the leading edge of one unit level with the trailing edge of the preceding unit; see similar hedgehog defense concept). This enabled enfilade lines of fire and somewhat defiladed the army units themselves. Odd units alternated with even units, respectively one forward and one back, providing gaps for an unwary enemy to enter and outflank itself, where it would become subjected to the combined direct and raking cross fire from the guns of three separate tercios. From their inception, tercio formations were meant to co-ordinate their field operations with cavalry.

Leadership of the Tercio

Mirroring military organization today, the Tercio was led by a Maestre de Campo appointed by the King as the commanding officer and guarded by 8 halberdiers. Assisting him was the sergeant major and a Furir Major in charge of logistics and armaments, with companies led by a Captain, also of royal appointment, with an Ensign in charge of the company color.

Companies had Sergeants, Furirs and Corporals in them. The Sergeants served as seconds-in-command of the company and brought the captain's orders to his soldiers, the Furirs were at orders to provide the necessary weapons and munitions, as well as additional men to the companies, and the Corporals, who lead groups of 25 (similar to today's platoons), was always in obedience to the Captain's orders and brought to him any possible cases of disorder in the unit.

Each company had corps of drums made up of drummers and fifers, sounding duty calls in battle, with the drum major and Fife major being provided by the Tercio headquarters.

The Tercio staff included a medical component (made up of a professional medic, a barber and surgeons), chaplains and preachers and a judicial unit, plus military constables enforcing order. They all reported to the Maestre de campo directly.

Tercios at the beginning which served in Italy and the Spanish Netherlands were organized into:

The companies were later reduced to 250-strong units.

During the actions in the Netherlands the Tercios were reorganized into 3 Colonelcies (Colonelías), led by Colonels (the predessor of today's battalions), but subdivided into the same 12 companies of 250, 2 of arquebusiers and 10 of pikemen.

Tercios and the Spanish Empire

Tercios were deployed all over Europe under the Habsburg Emperors, who were kings of both Spain and the Holy Roman Empire. They were made up of volunteers and built up around a core of professional soldiers and were highly trained. Sometimes later tercios did not stick to the all-volunteer model of the regular Imperial Spanish army – when the Habsburg king Philip II found himself in need of more troops, he raised a tercio of Catalan criminals to fight in Flanders,[5] a trend he continued with most Catalan criminals for the rest of his reign.[6] A large proportion of the Spanish army (which by the later half of the 16th century was entirely composed of tercio units: Tercio of Savoy, Tercio of Sicily) was deployed in the Netherlands to quell the increasingly difficult rebellion against the Habsburgs, although ironically many units of Spanish tercios became part of the problem rather than the solution when the time came to pay them. With the Spanish coffers depleted by constant warfare, unpaid tercio units often turned mutinous – in April 1576, just after winning a major victory, unpaid tercios mutinied and occupied the town of Antwerp, threatening to sack the town if their demands were not met.[7] Bereft of troops, and thus his authority, the Spanish leader on the scene met the tercios' demands.[8] 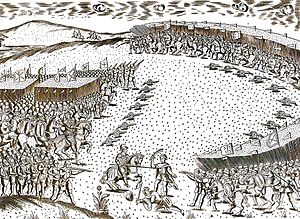 Portuguese terços in the Battle of Alcácer Quibir (1578).

Portugal adopted the Spanish model of tercio in the 16th century, calling it terço. In 1578, under the reorganization of the Portuguese Army conducted by King Sebastian, four terços were established: the Terço of Lisbon, the Terço of Estremadura, the Terço of Alentejo, and the Terço of Algarve. Each had about 2,000 men, formed into eight companies.

The infantry of the army organized for the expedition to Morocco in 1578 was made up of these four terços together with the Terço of the Adventurers (totally made up of young nobles), three mercenary terços (the German, the Italian, and the Castilian), and a unit of elite sharpshooters of the Portuguese garrison of Tangier. This was the Portuguese force which fought the Battle of Alcácer Quibir.

While united with the Spanish Crown, from 1580 to 1640, Portugal kept the organization of terços, although the Army had declined. Several Spanish tercios were sent to Portugal; the principal of them, the Spanish infantry Tercio of the City of Lisbon, occupied the main fortresses of the Portuguese capital. The Terço of the Navy of the Crown of Portugal, the ancestor of the modern Portuguese Marines, was created in this period.

After the restoration of Portuguese sovereignty in 1640, the Army was reorganized by King John IV of Portugal. The terços remained the basic units of the Portuguese infantry. Two types of terços were organized: the paid terços (first line permanent units) and the auxiliary terços (second line militia units). Portugal won the Restoration War with these terços. 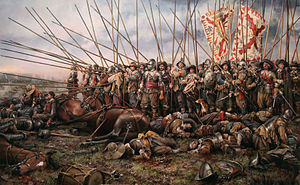 The Battle of Rocroi (1643) marked the end of the supremacy of the Spanish Tercios, painting by Augusto Ferrer-Dalmau picture.

The first challenge to the dominance of the tercios came at the Battle of Nieuwpoort (1600). The victor of Nieuwpoort, the Dutch stadtholder Maurice, Prince of Orange, believed he could improve on the tercio by combining its methods with the organisation of the Roman legion. These shallower linear formations brought a greater proportion of available guns to bear on the enemy simultaneously. The result was that the tercios at Nieuwpoort were badly damaged by the weight of Dutch firepower. Yet the Spanish army very nearly succeeded in spite of internal dissensions that had compromised its regular command. The Eighty Years' War (1568–1648) in the Low Countries continued to be characterized by sieges of cities and forts, while field battles were of secondary importance. Maurice's reforms did not lead to a revolution in warfare, but he had created an army that could meet the tercios on an even basis and that pointed the way to future developments. During the Thirty Years War (1618–1648) tercio formations began to suffer some serious defeats to more linear formations led by the Swedish king–general, Gustavus Adolphus.

Throughout its history the tercio's form and composition was never static as it evolved to meet the new challenges. Tercio formations employed by well trained troops with good cavalry support continued to win major battles, as can be seen in major battles like White Mountain (1620), Fleurus (1622), Breda (1624), Nördlingen (1634), Thionville (1639), Honnecourt (1641) and Valenciennes (1656). It was not until the Rocroi (1643) that the Spanish tercio's reputation for invincibility in major battles was shattered. Even then, the Rocroi defeat was precipitated by the collapse of the supporting cavalry arm rather than the failure of the tercios themselves, which had come close to besting the opposing infantry. Tercios continued to win important battles for a time after Rocroi and even after the Thirty Years War, but were already greatly modified from their older forms. By then, improvements in firearms and field artillery had given the new linear style a decided advantage. In response the later 17th century "tercios" had adopted so much of the linear style's organisation and tactics as to have little resemblance to the classic tercios of the previous century. In 1704, the Spanish tercios were transformed into regiments.