Terence Marne O'Neill, Baron O'Neill of the Maine, PC (10 September 1914 – 12 June 1990) was the fourth Prime Minister of Northern Ireland and leader (1963–1970) of the Ulster Unionist Party (UUP). A moderate unionist, who sought to reconcile the sectarian divisions in Northern Ireland society, he was Member of the Parliament of Northern Ireland for the Bannside constituency from 1946 until his forced resignation in 1970 as communal conflict erupted; his successor in Parliament was Ian Paisley, while control of the UUP also passed to more hard-line elements. 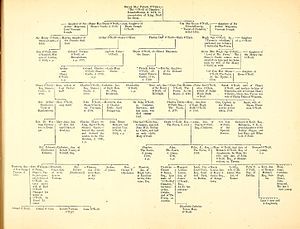 Terence O'Neill was born on 10 September 1914 at 29 Ennismore Gardens, Hyde Park, London.[1] He was the youngest son of Lady Annabel Hungerford Crewe-Milnes (daughter of the Marquess of Crewe) and Captain Arthur O'Neill of Shane's Castle, Randalstown, the first MP to be killed in combat during World War I. The family assumed the surname O'Neill by royal licence in lieu of their original name Chichester. The Chichesters trace their lineage to the name O'Neill through Mary Chichester, daughter of Henry O'Neill of Shane's Castle.

O'Neill grew up in London and was educated at West Downs School, Winchester and Eton College. He spent summer holidays in Ulster. Following school he spent a year in France and Germany and then worked in the City of London and Australia. In May 1940 he received a commission at the Royal Military College, Sandhurst,[1] and went on to serve in the Irish Guards during the Second World War, in which both of his brothers died. Like many other unionist politicians, the rank he held during the war followed him into his political career, hence "Captain" Terence O'Neill.[2]

Like all Prime Ministers of Northern Ireland, he was a member of the Orange Order.[4]

At the end of 1945 O'Neill and his family went to live in Northern Ireland in a converted Regency rectory near Ahoghill, County Antrim. In a by-election in 1946 he was elected as the Ulster Unionist Party MP for the Bannside constituency in the Stormont Parliament. O'Neill served in a series of junior positions. He was Parliamentary Secretary to the Ministry of Health and Local Government from February 1948 until November 1953, when he was appointed Chairman of Ways and Means and Deputy Speaker of the House of Commons. In 1953 he served as High Sheriff of Antrim.[5] He was elevated to cabinet level in April 1956 when he was made Minister of Home Affairs and sworn into the Privy Council. Six months later he was also given the finance portfolio that he administered alongside home affairs until he divested the latter to focus on finance. He remained Minister of Finance until his appointment as Prime Minister of Northern Ireland in 1963.[6]

In 1963, O'Neill succeeded Viscount Brookeborough as Prime Minister of Northern Ireland. He introduced new policies that would have been unthinkable with Brookeborough as Prime Minister. He aimed to end sectarianism and to bring Catholics and Protestants into working relationships. A visit to a convent proved controversial among many Protestants. He also had aspirations in the industrial sector, seeking improved relations with the trade union movement and attracting new investment from abroad to replace failing industry in Northern Ireland.[2] O'Neill seemed to strongly believe in industrialisation and modernisation. However it is clear that he was in some ways trying to prevent the Northern Ireland Labour Party (NILP) from gaining ground.[7] Northern Ireland was influenced by British politics so the arrival of Harold Wilson in Downing Street meant the NILP had a significant ally there. Wilson was not a committed UUP supporter, so that O'Neill was the first Prime Minister of Northern Ireland who could not rely on the support of the UK Government.[7]

As O'Neill promoted industrialisation and modernisation, Taoiseach Seán Lemass was doing similar things in the Republic of Ireland, thus leading to the first real rapprochement between the two jurisdictions since partition.[8] In January 1965 O'Neill invited the Taoiseach for talks in Belfast. O'Neill met with strong opposition from his own party, having informed very few of the visit, and from Ian Paisley, who rejected any dealings with the Republic. Paisley and his followers threw snowballs at Lemass' car during the visit. In February, O'Neill visited Lemass in Dublin. Opposition to O'Neill's reforms was so strong that in 1967 George Forrest – the MP for Mid Ulster, who supported the Prime Minister – was pulled off the platform at the Twelfth of July celebrations in Coagh, County Tyrone, and kicked unconscious by fellow members of the Orange Order.[9]

In December 1967 Lemass' successor Jack Lynch travelled to Stormont for his first meeting with O'Neill. On 8 January 1968, they met again in Dublin. On 19 January 1968, O'Neill made a speech marking five years in office to members of the Irish Association, calling for "a new endeavour by organisations in Northern Ireland to cross denominational barriers and advance the cause of better community relations". On 20 May 1968 O'Neill was pelted with eggs, flour and stones by members of the Woodvale Unionist Association[10] who disapproved of his policies.

In 1968 the Northern Ireland Civil Rights Association (NICRA) began street demonstrations. The march across Derry on 5 October 1968, banned by William Craig the Minister of Home Affairs, was met with violence from the Royal Ulster Constabulary (RUC) who used batons on protesters, among whom were prominent politicians. The O'Neill government was unable to deal with the disturbances, so Harold Wilson summoned O'Neill to Downing Street.[11] The Stormont cabinet minutes from 14 October show O'Neill recalling his time in Britain. He stated that Wilson had threatened to take over if O'Neill could not manage to gain control. Finally he concluded that if they couldn't manage it politically then they would be forced into a period of governance by police power alone.[12] The police violence was filmed by RTÉ television and broadcast worldwide.[13] The date of this march is taken by some historians as being the start of the Northern Ireland Troubles.

In response to these events O'Neill introduced a Five Point Reform Programme. This granted a number of the concessions that NICRA had demanded but importantly it did not include one man one vote in local government council elections. Despite this the NICRA felt it had made some ground and agreed to postpone its marches. While things were expected to improve, many Catholics felt let down by the limited reforms. A group was formed by university-based activists including Bernadette Devlin and Michael Farrell, named People's Democracy, which began a four-day march from Belfast to Derry on 1 January 1969. On the fourth day the march was attacked during the Burntollet Bridge incident by around 200 hardline unionists. Although many RUC men were present during the attack none intervened. It later emerged that some of the assailants were in fact off-duty policemen. Many marchers were injured, 13 requiring hospital treatment. The Burntollet attack sparked several days of rioting between the RUC and Catholic protesters in the Bogside area of Derry.

In February 1969 O'Neill called a surprise general election because of the turmoil inside the UUP. About ten to twelve dissident MPs opposed his leadership, and Brian Faulkner resigned from the Government.

From O'Neill's point of view, the election results were inconclusive. He was humiliated by his near-defeat in his own constituency of Bannside by Ian Paisley and resigned as leader of the UUP and as Prime Minister in April 1969 after a series of bomb explosions on Belfast's water supply by the Ulster Volunteer Force (UVF) brought his personal political crisis to a head.

In an interview with the Belfast Telegraph published on 10 May 1969 he stated: "It is frightfully hard to explain to Protestants that if you give Roman Catholics a good job and a good house they will live like Protestants because they will see neighbours with cars and television sets; they will refuse to have eighteen children. But if a Roman Catholic is jobless, and lives in the most ghastly hovel he will rear eighteen children on National Assistance. If you treat Roman Catholics with due consideration and kindness they will live like Protestants in spite of the authoritative nature of their Church..."[14]

He retired from Stormont politics in January 1970 when he resigned his seat, having become the Father of the House in the previous year. On 23 January 1970 he was created a life peer as Baron O'Neill of the Maine of Ahoghill in the County of Antrim.[15]

He spent his last years at Lisle Court, Lymington, Hampshire, although he continued to speak on the problems of Northern Ireland in the House of Lords where he sat as a cross-bencher. He was also a trustee of the Winston Churchill Memorial Trust. He died at his home of cancer on 12 June 1990 survived by his wife, son, and daughter. His estate was valued at £443,043: probate, 28 Aug 1990, CGPLA England and Wales.