Terminal velocity occurs when the downward force of gravity (Fg) equals the air resistance/force of drag (Fd) and buoyancy, such that velocity becomes asymptotic to a constant value with net acceleration = 0 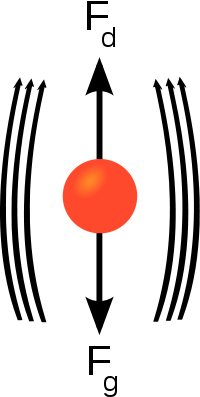 The downward force of gravity (Fg) equals the restraining force of drag (Fd). The net force on the object then, is zero, and the result is that the velocity of the object remains constant.

Terminal velocity is the highest velocity attainable by an object as it falls through air. It occurs once the sum of the drag force (Fd) and buoyancy equals the downward force of gravity (FG) acting on the object. Since the net force on the object is zero, the object has zero acceleration.[1]

In fluid dynamics, an object is moving at its terminal velocity if its speed is constant due to the restraining force exerted by the fluid through which it is moving.

As the speed of an object increases, the drag force acting on the object, resultant of the substance (e.g., air or water) it is passing through, increases. At some speed, the drag or force of resistance will equal the gravitational pull on the object (buoyancy is considered below). At this point the object ceases to accelerate and continues falling at a constant speed called terminal velocity (also called settling velocity). An object moving downward with greater than terminal velocity (for example because it was thrown downwards or it fell from a thinner part of the atmosphere or it changed shape) will slow down until it reaches terminal velocity. Drag depends on the projected area, and this is why objects with a large projected area relative to mass, such as parachutes, have a lower terminal velocity than objects with a small projected area relative to mass, such as bullets.

Higher speeds can be attained if the skydiver pulls in his or her limbs (see also freeflying). In this case, the terminal velocity increases to about 320 km/h (200 mph or 90 m/s),[2] which is almost the terminal velocity of the peregrine falcon diving down on its prey.[3] The same terminal velocity is reached for a typical .30-06 bullet dropping downwards—when it is returning to earth having been fired upwards, or dropped from a tower—according to a 1920 U.S. Army Ordnance study.[4]

In reality, an object approaches its terminal velocity asymptotically.

Buoyancy effects, due to the upward force on the object by the surrounding fluid, can be taken into account using Archimedes' principle: the mass

has to be reduced by the displaced fluid mass

the volume of the object. So instead of

use the reduced mass

in this and subsequent formulas.

On Earth, the terminal velocity of an object changes due to the properties of the fluid, the mass of the object and its projected cross-sectional surface area.

Mathematically, defining down to be positive, the net force acting on an object falling near the surface of Earth is (according to the drag equation): 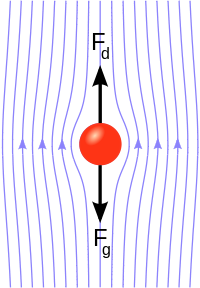 For very slow motion of the fluid, the inertia forces of the fluid are negligible (assumption of massless fluid) in comparison to other forces. Such flows are called creeping flows and the condition to be satisfied for the flows to be creeping flows is the Reynolds number,

. The equation of motion for creeping flow (simplified Navier-Stokes equation) is given by

The analytical solution for the creeping flow around a sphere was first given by Stokes in 1851. From Stokes' solution, the drag force acting on the sphere can be obtained as

where the Reynolds number,

. The expression for the drag force given by equation (6) is called Stokes' law.

When the value of

is substituted in the equation (5), we obtain the expression for terminal velocity of a spherical object moving under creeping flow conditions:

The creeping flow results can be applied in order to study the settling of sediment particles near the ocean bottom and the fall of moisture drops in the atmosphere. The principle is also applied in the falling sphere viscometer, an experimental device used to measure the viscosity of highly viscous (sticky) fluids, for example oil, parrafin, tar etc.

Finding the terminal velocity when the drag coefficient is not known

where ν is the kinematic viscosity, equal to μ/ρ. This product is a function of Reynolds number, and one can consult a graph of Cd versus Re to find where along the curve the product attains the correct value (a qualitative example of such a graph for spheres is found at this NASA site: [1]) From this one knows the coefficient of drag and one can then use the formula given above to find the terminal velocity.

For a spherical object, the above-mentioned product can be simplified:

We can see from this that the regime and the drag coefficient depend only on the sphere's weight and the fluid properties. There are three regimes: creeping flow, intermediate-Reynolds number Newton's Law (almost constant drag coefficient), and a high-Reynolds number regime.[5] In the latter regime the boundary layer is everywhere turbulent (see Golf ball#Aerodynamics). These regimes are given in the following table. The weight range for each regime is given for water and air at 1 atm pressure and 25 °C. Note though that the weight (given in terms of mass in standard gravity) is the weight in the fluid, which is less than the mass times the local gravity because of buoyancy.

Between the first two regimes there is a smooth transition. But notice that there is overlap between the ranges of CdRe2 for the last two regimes. Spheres in this weight range have two stable terminal velocities. A rough surface, such as of a dimpled golf ball, allows transition to the lower drag coefficient at a lower Reynolds number.

Terminal velocity in the presence of buoyancy force

When the buoyancy effects are taken into account, an object falling through a fluid under its own weight can reach a terminal velocity (settling velocity) if the net force acting on the object becomes zero. When the terminal velocity is reached the weight of the object is exactly balanced by the upward buoyancy force and drag force. That is

If the falling object is spherical in shape, the expression for the three forces are given below:

Substitution of equations (2–4) in equation (1) and solving for terminal velocity,

to yield the following expression