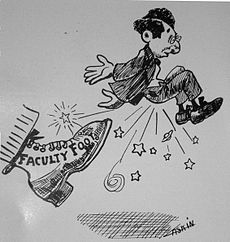 An early 20th-century illustration of a university faculty member being "given the boot", slang for a form of involuntary termination.

Firing carries a stigma in many cultures, and may hinder the jobseeker's chances of finding new employment, particularly if he or she has been sacked from previous jobs. Jobseekers sometimes do not mention jobs from which they were fired on their résumés; accordingly, unexplained gaps in employment, and refusal or failure to contact previous employers are often regarded as "red flags".[1]

Dismissal is where the employer chooses to require the employee to leave, generally for a reason which is the fault of the employee. The most common colloquial terms for dismissal in America is "getting fired" or "getting canned" whereas in Britain the term "getting the sack" or "getting sacked" is also used.

A less severe form of involuntary termination is often referred to as a layoff (also redundancy or being made redundant in British English). A layoff is usually not strictly related to personal performance, but instead due to economic cycles or the company's need to restructure itself, the firm itself going out of business or a change in the function of the employer (for example, a certain type of product or service is no longer offered by the company and therefore jobs related to that product or service are no longer needed). One type of layoff is the aggressive layoff[citation needed]; in such a situation, the employee is laid off, but not replaced as the job is eliminated.

In an economy based on at-will employment, such as that of the United States, a large proportion of workers may be laid off at some time in their life, and often for reasons unrelated to performance or ethics.[citation needed] Employment termination can also result from a probational period, in which both the employee and the employer reach an agreement that the employer is allowed to lay off the employee if the probational period is not satisfied.

Often,[citation needed] layoffs occur as a result of "downsizing", "reduction in force" or "redundancy". These are not technically classified as firings; laid-off employees' positions are terminated and not refilled, because either the company wishes to reduce its size or operations or otherwise lacks the economic stability to retain the position. In some cases, a laid-off employee may eventually be offered their old position again by his/her respective company, though by this time he or she may have found a new job.

Some companies resort to attrition (voluntary redundancy) as a means to reduce their workforce.[2] Under such a plan, no employees are forced to leave their jobs. However, those who do depart voluntarily are not replaced. Additionally, employees are given the option to resign in exchange for a fixed amount of money, frequently a few years of their salary. Such plans have been carried out by the United States Federal Government under President Bill Clinton during the 1990s,[3] and by the Ford Motor Company in 2005.[4]

However, "layoff" may be specifically addressed and defined differently in the articles of a contract in the case of unionised work.

Some terminations occur as a result of mutual agreement between the employer and employee. When this happens, it is sometimes debatable if the termination was truly mutual. In many of these cases, it was originally the employer's wish for the employee to depart, but the employer offered the mutual termination agreement in order to soften the firing (as in a forced resignation). But there are also times when a termination date is agreed upon before the employment starts (as in an employment contract).

Some types of termination by mutual agreement include:

Firms that wish for an employee to exit of his or her own accord but do not wish to pursue firing or forced resignation, may degrade the employee's working conditions, hoping that he or she will leave "voluntarily".

The employee may be moved to a different geographical location, assigned to an undesirable shift, given too few hours if part time, demoted (or relegated to a menial task), or assigned to work in uncomfortable conditions. Other forms of manipulation may be used, such as being unfairly hostile to the employee, and punishing him or her for things that are deliberately overlooked with other employees.

Often, these tactics are done so that the employer won't have to fill out termination papers in jurisdictions without at-will employment. In addition, with a few exceptions, employees who voluntarily leave generally cannot collect unemployment benefits.

Such tactics may amount to constructive dismissal, which is illegal in some jurisdictions.

Depending on the circumstances, one whose employment has been terminated may or may not be able to be rehired by the same employer.

An employee who was fired by an employer may in some cases be eligible for rehire by that same employer, although in some cases it is usually related to staffing issues.

Employment can be terminated without prejudice, meaning the fired employee may be rehired readily for the same or a similar job in the future. This is usually true in the case of layoff.

Conversely, a person's employment can be terminated with prejudice, meaning an employer will not rehire the former employee to a similar job in the future. This can be for many reasons: incompetence, misconduct (such as dishonesty or "zero tolerance" violations), insubordination or "attitude" (personality clashes with peers or bosses).

Termination forms ("pink slips") routinely include a set of check boxes where a supervisor can indicate "with prejudice" or "without prejudice".

For example, public school teachers in New York who are laid off are placed on a Preferred Eligible List for employment in the school district where they were laid off for seven years from the date of layoff. If a teacher who was laid off applies to fill a job opening, he or she is given priority over other applicants.