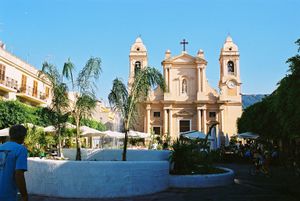 Terrasini is a town and comune in the Province of Palermo on the island of Sicily in Italy.

Terrasini is located 30 kilometres (19 mi) west of Palermo at the motorway between Palermo and Trapani, between the mountains and the Gulf of Castellammare near the Palermo International Airport.

Terrasini's population works mainly in fishing and tourism. The population triples during the summer.

The name Terrasini probably derives from Latin "terra sinus" = "land at the gulf" (the Gulf of Castellamare) or from "terra sinorum" = "land of the bays" due to the strongly curved coastline with a large number of larger and smaller bays. The name was first cited for the region in a letter of saint Martin della Scale of November 24, 1350 as "terras vocatas li Terrasini".

The grottoes in the area of Terrasini were inhabited already in the late paleolithic times. On different sites, tracks of Roman settlers were found.

The origin of the town goes back to the late medieval times to a small settlement (called Favarotta) of agricultural workers on the large-scale landed property of the family "La Grua Talamanca" from Carini.

In the 17th century, fishermen settled at the coast. When the former feudal property was left to the agricultural workers for cultivation, a flourishing agriculture developed around the fishers' village.

Modern Terrasini was founded October 24, 1836, when King Ferdinand II issued a decree that the village Favarotta, then considered part of neighboring Cinisi, should be merged with adjoining Terrasini as a single community.[1]