From Infogalactic: the planetary knowledge core
Jump to: navigation, search
Not to be confused with Territorial Defense Forces (Poland).

The Territorial Defence Force (Polish: Wojska Obrony Terytorialnej – WOT) is a planned military reserve component of the Polish armed forces that, as of 2016, is in the process of being formed. Plans call for the force, once fully active, to consist of 50,000 part-time volunteers.[1]

The Territorial Defence Force is a planned reserve component of Poland's military.[3] A similar, identically named, organization had existed in the country since 1965 but was disbanded in 2008 as part of a modernization program. The re-creation of the Territorial Defence Force was first announced in 2015 in reaction to the collapse of Ukrainian forces during the War in Donbass and concern that Poland's existing military would be ill-equipped to confront an adversary under similar conditions of low-intensity conflict. According to government officials, public reception to the idea was positive with 11,000 persons registering interest in joining the force within the first few months after the initial announcement.[4] The program was subsequently formalized with the signing of "a new document concerning the functioning of the territorial defense concept" by Minister of Defence of Poland Antoni Macierewicz in a ceremony held at Warsaw's Waldemar Milewicz General Secondary School on April 27, 2016.[5] 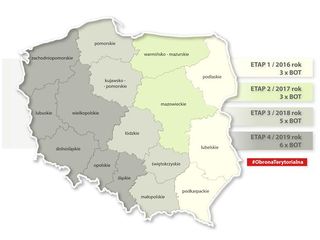 Schedule for the formation of the Territorial Defense Forces

Plans announced in January 2016 called for what officials said would eventually become a 46,000-man contingent, though initially the WOT would consist of just three brigades sited in the northeast of the country and funded with an annual appropriation of approximately €60 million; it was later reported the force would have a maximum size of 35,000 personnel.[6][7] As envisaged, the Territorial Defence Force is to be a part-time, all-volunteer organization, with soldiers receiving 30 days of military training per year. Unlike existing reserve forces, which upon mobilization are integrated into regular components of the Polish military, the Territorial Defence Force will be designed to operate autonomously in home areas and with personnel drawn from the local population. According to Polish military planners, this set-up would be most effective in countering hybrid warfare.[6] As part of the Ministry of Defense acquisition plans for 2017-2022, the total number of volunteers was set to 50,000 and a budget of 3.2 billion zloty outlaid to arm and equip them.[1]

Besides responding to external military threats, the WOT will, according to the Defense Ministry, help strengthen Poland's "patriotic and Christian foundations".[8]