Territories of the Holy Roman Empire outside the Imperial Circles 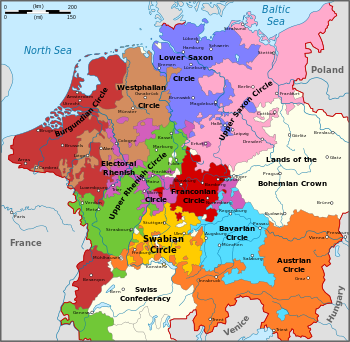 A map of the Imperial Circles as in 1560. Unencircled territories appear in white.

When the Imperial Circles (Latin: Circuli imperii German: Reichskreise) — comprising a regional grouping of territories of the Holy Roman Empire — were created as part of the Imperial Reform at the 1500 Diet of Augsburg, many Imperial territories remained unencircled.

Initially six circles were established in order to secure and enforce the Public Peace (Landfrieden) declared by Emperor Maximilian I and the jurisdiction of the Reichskammergericht. They did not incorporate the territories of the Prince-electors and the Austrian homelands of the ruling House of Habsburg. Only at the 1512 Diet of Trier were these estates (except for the Kingdom of Bohemia) included in the newly implemented Burgundian, Austrian, Upper Saxon, and Electoral Rhenish circles, confirmed by the 1521 Diet of Worms.

Lands of the Bohemian Crown

The Old Swiss Confederacy remained part of the Holy Roman Empire until 1648, when it gained formal independence in the Peace of Westphalia.