The Territory of Papua comprised the southeastern quarter of the island of New Guinea from 1883 to 1975. In 1883, the Government of Queensland annexed this territory for the British Empire.[2] However, the United Kingdom Government refused to ratify the annexation but in 1884 a Protectorate was proclaimed over the territory, then called "British New Guinea". There is a certain ambiguity about the exact date on which the entire territory was annexed by the British. However, The Papua Act 1905 recites that this happened "on or about" 4 September 1888.[3] On 18 March 1902, the Territory was placed under the authority of the Commonwealth of Australia.[4] Resolutions of acceptance, accepting the territory, were passed by the Commonwealth Parliament, who accepted the territory under the name of Papua.[5]

Papua made up roughly half of the current-day Papua New Guinea and contained the territory's capital, Port Moresby which then became the capital of the independent country. 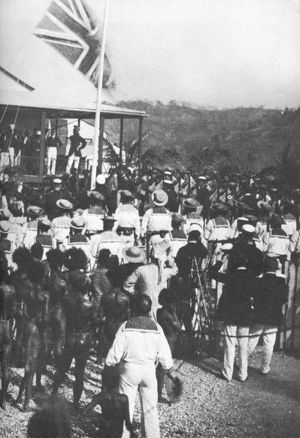 Archeological evidence suggests that humans arrived on New Guinea at least 60,000 years ago. These Melanesian people developed stone tools and agriculture. Portuguese and Spanish navigators sailing in the South Pacific entered New Guinea waters in the early part of the 16th century and in 1526-27, Don Jorge de Meneses came upon the principal island "Papua". In 1545, the Spaniard Íñigo Ortiz de Retez gave the island the name "New Guinea" owing to what he saw as a resemblance between the islands' inhabitants and those found on the African Guinea coast. Knowledge of the interior of the island remained scant for several centuries after these initial European encounters.[8]

In 1883 Sir Thomas McIlwraith, the Premier of Queensland, ordered Henry Chester (1832–1914), the Police Magistrate on Thursday Island to proceed to Port Moresby and annex New Guinea and adjacent islands in the name of the British government. Chester made the proclamation on 4 April 1883, but the British government repudiated the action.

On 6 November 1884, after the Australian colonies had promised financial support, the territory became a British protectorate.

On 4 September 1888 it was annexed, together with some adjacent islands, by Britain as British New Guinea.

The northern part of modern Papua New Guinea, was under German commercial control from 1884 and under direct rule by the German government in 1899, as the larger part of the colony of German New Guinea, then known as Kaiser-Wilhelmsland.

In 1902, Papua was effectively transferred to the authority of the new British dominion of Australia. With the passage of the Papua Act of 1905, the area was officially renamed the Territory of Papua, and Australian administration became formal in 1906.

At the outbreak of the First World War in 1914 Australia captured Kaiser-Wilhelmsland following the landing on 11 September 1914 of the 2000 man Australian Naval and Military Expeditionary Force. The Australian takeover of New Guinea was formalised by the Treaty of Versailles in 1919.

Australian troops at Milne Bay, Papua. The Australian army was the first to inflict defeat on the Imperial Japanese Army during World War II at the Battle of Milne Bay of Aug-Sep 1942.

Shortly after the start of the Pacific War, the island of New Guinea was invaded by the Japanese. Papua was the least affected region. Most of West Papua, at that time known as Dutch New Guinea, was occupied, as were large parts of the Territory of New Guinea (the former German New Guinea, which was also under Australian rule after World War I), but Papua was protected to a large extent by its southern location and the near-impassable Owen Stanley Ranges to the north. Civil administration was suspended during the war and both territories (Papua and New Guinea) were placed under martial law for the duration.[citation needed]

The New Guinea campaign opened with the battles for New Britain and New Ireland in the Territory of New Guinea in 1942. Rabaul, the capital of the Territory, was overwhelmed on 22–23 January and was established as a major Japanese base from whence they landed on mainland New Guinea and advanced towards Port Moresby and Australia.[9] Having had their initial effort to capture Port Moresby by a seaborne invasion disrupted by the U.S. Navy in the Battle of the Coral Sea, the Japanese attempted a landward invasion from the north via the Kokoda Track. From July 1942, a few Australian reserve battalions, many of them very young and untrained, fought a stubborn rearguard action against a Japanese advance along the Kokoda Track, towards Port Moresby, over the rugged Owen Stanley Ranges.[10] The militia, worn out and severely depleted by casualties, were relieved in late August by regular troops from the Second Australian Imperial Force, returning from action in the Mediterranean Theatre.

In early September 1942 Japanese marines attacked a strategic Royal Australian Air Force base at Milne Bay, near the eastern tip of Papua. They were beaten back by the Australian Army, and the Battle of Milne Bay is remembered as the first outright defeat on Japanese land forces during World War II.[11] The offensives in Papua and New Guinea of 1943–44 were the single largest series of connected operations ever mounted by the Australian armed forces.[12] The Supreme Commander of operations was the United States General Douglas Macarthur, with Australian General Thomas Blamey taking a direct role in planning and operations being essentially directed by staff at New Guinea Force headquarters in Port Moresby.[13] Bitter fighting continued in New Guinea between the largely Australian force and the Japanese 18th Army based in New Guinea until the Japanese surrender in 1945.

Under Australian Minister for External Territories Andrew Peacock, the territory adopted self-government in 1972 and on 15 September 1975, during the term of the Whitlam Government in Australia, the Territory became the independent nation of Papua New Guinea.[16][17]