From Infogalactic: the planetary knowledge core
Jump to: navigation, search
For other uses, see Teruel (disambiguation).

Teruel (Spanish pronunciation: [teˈɾwel]) is a town in Aragon, located in eastern Spain, and is also the capital of Teruel Province. It has a population of 35,961 in 2013[1] making it the least populated provincial capital in the country. It is noted for its harsh climate (hot in summer and very cold in winter), its renowned jamón serrano (cured ham), its pottery, its surrounding archaeological sites, rock outcrops containing some of the oldest dinosaur remains of the Iberian Peninsula, and its famous Fiestas (La vaquilla del ángel during the second weekend of July and "Bodas de Isabel de Segura" around the third weekend of February). Teruel is regarded as the "town of mudéjar" (Moorish-influenced architecture) due to numerous buildings designed in this style. All of them are comprised in the Mudéjar Architecture of Aragon which is a World Heritage Site by the UNESCO.

Teruel's remote and mountainous location (it is 915 metres above sea level) and its low population has led to relative isolation within Spain. A campaign group with the slogan Teruel existe ("Teruel exists") was founded in 1999 to press for greater recognition and investment in the town and the province. Due in part to the campaign, transport connections to Teruel are being greatly improved with the construction of a motorway between Zaragoza and Sagunto, large parts of which are now open. However, Teruel remains the only provincial capital in peninsular Spain without a direct railway link to the capital, Madrid. 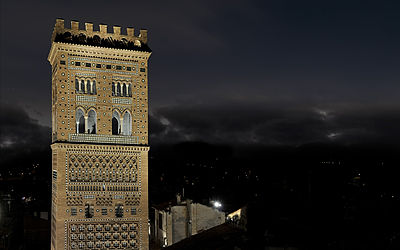 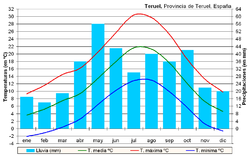 Teruel's climate is a moderate continental one typical of a mountainous region. Summer temperatures are mild, although there is much temperature variation, and winters are cold, with low minimum temperatures sometimes dropping to −10 °C. The lowest amount of rainfall is in winter and the greatest falls at the end of spring. 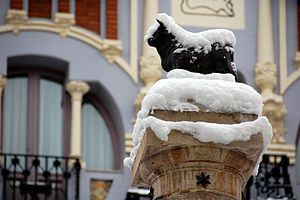 Teruel was founded in 1176 by Sancho Sánchez Muñoz and Blasco Garcés Marcilla. In the Middle Ages Teruel possessed a prominent Jewish community, which was robust during the centuries Muslims were in power and enjoyed several privileges. Later on after the Christian reconquest of Spain, the Jewish community paid a yearly tax of 300 sueldos (in the 14th century). Its members were engaged in commerce and industry, especially in wool-weaving. During the persecutions of 1391 many of them were killed, while others accepted Christianity in order to save their lives.[4]

Teruel was fought over in the Spanish Civil War and suffered much destruction. The Battle of Teruel in December 1937-February 1938, was one of the bloodiest of the war. The town changed hands several times, first falling to the Republicans and eventually being re-taken by the Nationalists. In the course of the fighting, Teruel was subjected to heavy artillery and aerial bombardment. The two sides suffered up to 140,000 casualties between them in the three-month battle. The Nationalists won a decisive victory. 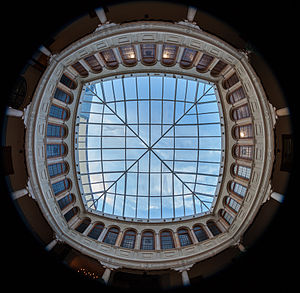 Glass roof of the museum of religious art in Teruel. 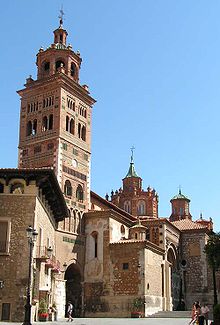 View of the Mudéjar Cathedral of Teruel. 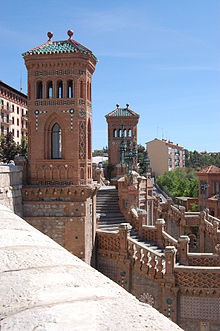 The beauty of the town's cultural inheritance, which has some Islamic influence, has been recognised by UNESCO, which includes four churches in the World Heritage Site Mudéjar Architecture of Aragon, notably the town's ornate cathedral in the Mudéjar style.[5]

One of Teruel's best known monuments is very small statue of a bull on top of a tall column, known as El Torico ("the little bull"). It is located in the main square, Plaza Carlos Castell, more commonly known as the Plaza del Torico in the middle of the town center.

On the outskirts of Teruel is Dinópolis Teruel, a combined theme park and museum centred on dinosaurs. Promoted as a paleontological park, it includes a life-size robotic model of a Tyrannosaurus rex.[1] Dinópolis also owns three other museums in the surrounding area, which display the remains of dinosaurs discovered in the region.[2]. The chimney of the Teruel Power Plant is one of the tallest freestanding structures in Western Europe.

The city buses are run by Grupo Autobuses Jimenez.