The tessarakonteres (Greek: τεσσαρακοντήρης, "forty-rowed"), or simply "forty" was a very large galley reportedly built in the Hellenistic period. The name "forty" refers to the number of rowers on each column of oars that propelled it. It would have been the largest ship constructed in antiquity, and possibly the largest human-powered vessel ever built. 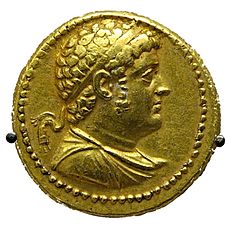 The "forty" was reportedly built by Ptolemy IV Philopator of Egypt in the 3rd century BC. It was first described by his contemporary Callixenus of Rhodes in the lost Peri Alexandreias. In the early-3rd century AD, Athenaeus quotes this in his Deipnosophistae.[1][2]

Plutarch, writing in the late 1st century AD, also mentioned this immense vessel in his Life of Demetrius, part of his Parallel Lives series, disagreeing or misquoting slightly on the height to top of stern, which he reports as forty-eight cubits:[3]

Note that the translation of "forty banks" is overliteral; see below.

Configuration of the oars

The trireme, a three-banked galley with one man per oar, was the main Hellenistic warship up to and into the 4th century BC. At that time, a requirement for heavier ships led to the development of polyremes (meaning "many oars", applied to "fours" or larger)[4] called "fours" and "fives", and later up to "tens", the largest that seems to have been used in battle.[5] Larger polyremes were built, with Ptolemy II Philadelphus eventually building a "twenty" and a "thirty", and Ptolomy IV Philopator building the "forty".[5] 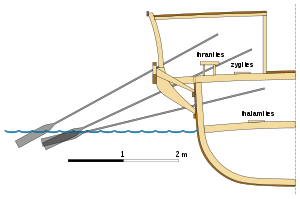 Depiction of the position of the rowers in three different levels (from top: thranitai, zygitai and thalamitai) in a Greek trireme.

The maximum practical number of oar banks a ship could have was three.[5][6][7] So the number in the type name did not refer to the banks of oars any more (as for biremes and triremes, respectively two and three banks of oars with one rower per oar), but to the number of rowers per vertical section, with several men on each oar.[5] Indeed, just because a ship was larger, did not mean it necessarily operated all three banks: the "four" may have been a simple evolution of a standard trireme, but with two rowers on the top oar;[8] it may have been a bireme with two men on each oar; or it may just have had a single bank with four men on each oar.[9] Classes of ship could differ in their configuration between regions and over time.[10]

From galleys used in the 16th to 18th centuries AD, it is known that the maximum number of men that can operate a single oar efficiently is eight.[11] Further, Casson writes that the oars were the proper length for no more than eight rowers.[12]

Mention by Callixenus of the "forty's" thranite (the uppermost rowing level of a trireme) oars leads Casson to determine that the "forty" had three banks. He points to the practical limit of eight rowers to an oar, giving a maximum size class of "twenty-four", as well as to the need for a vastly larger deck than one ship could provide in order to accommodate the reported numbers of marines. Combined with Callixenus description of the ship having two heads and two sterns, Casson suggests that the "forty" must have been a catamaran made up of two "twenties" joined together by a deck.[12][13] Each column would be composed of twenty rowers; perhaps eight rowers on the top rank, seven in the middle and five on the bottom rank.[12]

As a catamaran of two "twentys" with 4,000 oarsmen, there would be 2,000 per hull and therefore 1,000 per side. The 130m length would allow ample room for the 50 vertical sections of 3 oars each, with each column accommodating 20 rowers. Thus there would be 150 oars per side. Casson has suggested that it was possible that the two internal sides were not equipped with oars and that the rowers there acted as reserve crew for those on the outer side, so the "forty" would have had either 300 or 600 oars.[14]

It had 7 naval rams, with one primary one,[2] and the deck would have provided a stable platform for catapults that were often mounted on supergalleys.[16] However, the "forty" was likely just a showpiece; Plutarch describes the ship as for exhibition only.[17]