The Tessin Palace (Swedish: Tessinska palatset) is a baroque town house located in Gamla Stan, the old town in central Stockholm. Located next to the Royal Palace, it is facing Slottsbacken, the major approach to the Stockholm Palace, and flanked by two alleys, Finska Kyrkogränd and Bollhusgränd.

The mansion was constructed between 1694 and 1700 by architect Nicodemus Tessin the Younger. The building was inherited by Tessin's son Carl Gustaf Tessin who had to sell it in 1750 for financial reasons. The palace later became property of the crown and has been used as residence for the Over Governor and later Governor of Stockholm County. 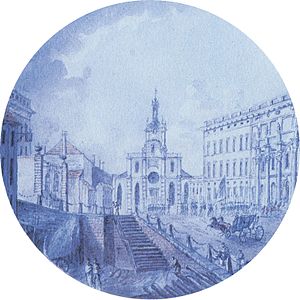 Slottsbacken in Stockholm during the 1780s. From right to left: Stockholm Palace, Storkyrkan, Bollhuset Theatre and the Tessin Palace. Drawing, Martin Rudolf Heland.