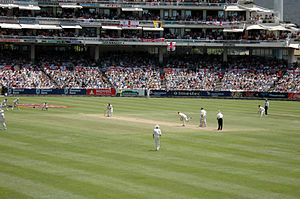 A Test match between South Africa and England in January 2005. The men wearing black trousers on the far right are the umpires. Test cricket is played in traditional white clothes and with a red ball.

Test cricket is the longest form of the sport of cricket and is considered the highest major cricket standard. Test matches are played between national representative teams with "Test status", as determined by the International Cricket Council (ICC). The two teams of 11 players play a four-innings match, which often lasts up to five days. It is generally considered the most complete examination of teams' playing ability and endurance.[1][2][3] The origin of the name Test stems from the long, gruelling match being a "test" of the relative strength of the two sides.[4]

The first officially recognised Test match began on 15 March 1877, between England and Australia at the Melbourne Cricket Ground (MCG), where Australia won by 45 runs.[5] A Test match to celebrate 100 years of Test cricket was held in Melbourne from 12 to 17 March 1977, in which Australia beat England by 45 runs—the same margin as that first Test.[6]

Test matches are the highest form of major cricket although, statistically, their data forms part of first-class cricket. Matches are played between national representative teams with "Test status", as determined by the International Cricket Council. As of December 2014[update], ten national teams have Test status, the most recently promoted being Bangladesh in 2000. Zimbabwe's Test status was voluntarily suspended, because of poor performances between 2006 and 2011; it returned to competition in August 2011.[9]

In January 2014, during the historic ICC meeting in Dubai, the pathway for new potential test nations was laid out with the winners of the next round of the ICC Intercontinental Cup playing a 5-day match against the bottom rank test nation. If the Associate team defeats the test nation, then they could be added as the new test country and be given full membership.

A list of matches, defined as "Tests", was first drawn up by Australian Clarence Moody in the mid-1890s. Representative matches played by simultaneous England touring sides of 1891–92 (in Australia and South Africa) and 1929–30 (in the West Indies and New Zealand) are deemed to have "Test status".

In 1970, a series of five "Test matches" was played in England between England and a Rest of the World XI. These matches, originally scheduled between England and South Africa, were amended after South Africa was suspended from international cricket because of their government's policy of apartheid. Although initially given Test status (and included as Test matches in some record books, including Wisden Cricketers' Almanack), this was later withdrawn and a principle was established that official Test matches can only be between nations (although the geographically and demographically small countries of the West Indies have since 1928 been permitted to field a coalition side). Despite this, in 2005, the ICC ruled that the six-day Super Series match that took place in October 2005, between Australia and a World XI, was an official Test match. Some cricket writers and statisticians, including Bill Frindall, ignored the ICC's ruling and excluded the 2005 match from their records. The series of "Test matches" played in Australia between Australia and a World XI in 1971/72 do not have Test status. The commercial "Supertests" organised by Kerry Packer as part of his World Series Cricket enterprise and played between "WSC Australia", "WSC World XI" and "WSC West Indies" from 1977 to 1979 have never been regarded as official Test matches.

There are currently ten Test-playing teams, representing individual nations except for England and the West Indies. Test status is conferred upon a country or group of countries by the International Cricket Council. Teams that do not have Test status can play in the ICC Intercontinental Cup, specifically designed to allow non-Test teams to play under conditions similar to Tests. The teams are listed below with the date of each team's Test debut:

In 2014, the ICC announced the introduction of the ICC Test Challenge, which will see the holder of the Intercontinental Cup play a pair of two five-day match series against the lowest ranked test-playing nation every four years, starting in 2018.[13]

Conduct of the game

The times of sessions and intervals may be altered in certain circumstances: if bad weather or a change of innings occurs close to a scheduled break, the break may be taken immediately; if there has been a loss of playing time, for example because of bad weather, the session times may be adjusted to make up the lost time; if the batting side is nine wickets down at the scheduled tea break, then the interval may be delayed until either 30 minutes has elapsed or the team is all out;[14] the final session may be extended by up to 30 minutes if 90 or more overs have not been bowled in that day's play (subject to any reduction for adverse weather);[15] the final session may be extended by 30 minutes (except on the 5th day) if the umpires believe the result can be decided within that time.[16]

In the early days of Test cricket, matches were played for four days. Until the 1980s, it was usual to include a 'rest day,' often a Sunday. There have also been 'Timeless Tests', which did not end after a predetermined maximum time. In 2005, Australia played a six-day match against a World XI, which the ICC sanctioned as an official Test match even though the match reached a conclusion on the fourth day.

There have been attempts by the ICC, the sport's governing body, to introduce day-night Test Matches.[17] In 2012, The International Cricket Council passed playing conditions that allowed for the staging of day-night Test matches.[7] The first day-night Test took place during New Zealand's tour to Australia in November 2015.[8]

Test cricket is played in innings (the word denotes both the singular and the plural). In each innings, one team bats and the other bowls (or fields). Ordinarily four innings are played in a Test match, and each team bats twice and bowls twice. Before the start of play on the first day, the two team captains and the match referee toss a coin; the captain who wins the toss decides whether his team will bat or bowl first.

In the following scenarios, the team that bats first is referred to as Team A and their opponents as Team B.

A team's innings ends in one of the following ways:[18]

If, at the completion of its first innings, Team B's first innings total is 200 or more fewer than Team A's, the captain of Team A may (but is not required to) order Team B to have their second innings next. This is called enforcing the follow on.[19] In this case, the usual order of the third and fourth innings is reversed: Team A will bat in the fourth innings. It is rare for a team forced to follow on to win the match. In Test cricket it has only happened three times, although over 285 follow-ons have been enforced: Australia was the losing team on each occasion, twice to England, in 1894 and in 1981, and once to India in 2001.[20]

If the whole of the first day's play of a test match has been lost because of bad weather, then Team A may enforce the follow on if Team B's first innings total is 150 or more fewer than Team A's. During the 2nd test between England and New Zealand at Headingley, Leeds, 24–28 May 2013, England batted first after the first day was lost because of rain.[21] New Zealand, batting second, scored 180 runs fewer than England, meaning England could have enforced the follow on, though chose not to. This is similar to four-day first class cricket, where the follow on can be enforced if the difference is 150 runs or fewer.

After 80 overs, the captain of the bowling side may take a new ball, although this is not required.[22] The captain will usually take the new ball: being harder and smoother than an old ball, a new ball generally favours faster bowlers who can make it bounce more variably. The roughened, softer surface of an old ball can be more conducive to spin bowlers, or those using reverse swing. The captain may delay the decision to take the new ball if he wishes to continue with his spinners (because the pitch favours spin). After a new ball has been taken, should an innings last a further 80 overs, then the captain will have the option to take another new ball.

A Test match may end in one of six results:

Test cricket is almost always played as a series of matches between two countries, with all matches in the series taking place in the same country (the host). Often there is a perpetual trophy that is awarded to the winner, the most famous of which is the Ashes contested between England and Australia. There have been two exceptions to the bilateral nature of Test cricket: the 1912 Triangular Tournament, a three-way competition between England, Australia and South Africa (hosted by England), and the Asian Test Championship, an event held in 1998–99 and 2001–02.

The number of matches in Test series has varied from one to seven.[29]

Up until the early 1990s,[30] Test series between international teams were organised between the two national cricket organisations with umpires provided by the home team. With the entry of more countries into Test cricket, and a wish by the ICC to maintain public interest in Tests in the face of the popularity of one-day cricket, a rotation system was introduced that sees all ten Test teams playing each other over a six-year cycle, and an official ranking system (with a trophy held by the highest-ranked team). In this system, umpires are provided by the ICC. An elite panel of eleven umpires has been established, and the panel is supplemented by an additional International Panel that includes three umpires named by each Test-playing country. The elite umpires officiate almost all Test matches (usually not a Test involving their home country); the International Panel is only employed when the cricketing calendar is filled with activity, or for one-day internationals (ODIs).

Sides designated as "England" began to play in the late 18th century, but these teams were not truly representative. Early international cricket was disrupted by the French Revolution and the American Civil War. The earliest international cricket match was between USA and Canada, on 24 and 25 September 1844.[31] This has never been officially considered a "Test match". Tours of national English sides abroad took place, particularly to the USA, Australia and New Zealand. The Australian Aborigines team became the first organised overseas cricketers to tour England in 1868.

Two rival English tours of Australia were proposed in the early months of 1877, with James Lillywhite campaigning for a professional tour and Fred Grace for an amateur one. Grace's tour fell through and it was Lillywhite's team that toured New Zealand and Australia in 1876–77. Two matches against a combined Australian XI were later classified as the first official Test matches. The first match was won by Australia, by 45 runs, and the second by England. After reciprocal tours established a pattern of international cricket, The Ashes was established as an ongoing competition during the Australian tour of England in 1882. Surprisingly beaten, a mock obituary of English cricket was published in the Sporting Times the following day: the phrase "The body shall be cremated and the ashes taken to Australia" prompted the subsequent creation of the Ashes urn. The series of 1884–85 was the first to be held over five matches: Shaw, writing in 1901, considered the side to be "the best ever to have left England".

The first Test series not to involve Australia occurred in 1888–89, as an understrength England side toured South Africa.

The following are the perpetual trophies in Test Cricket.