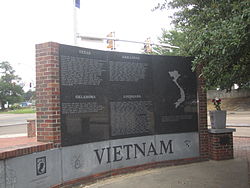 Vietnam Memorial in Texarkana honors those killed from Arkansas, Louisiana, Oklahoma, and Texas.

The Texarkana, TX–Texarkana, AR Metropolitan Statistical Area (MSA), as defined by the United States Office of Management and Budget, is a two-county region anchored by the twin cities of Texarkana, Texas and Texarkana, Arkansas, and encompassing the surrounding communities in Bowie County, Texas and Miller County, Arkansas. As of the 2010 census, the MSA had a population of 143,486.[3] Texarkana is a subset of the broader Ark-La-Tex region. 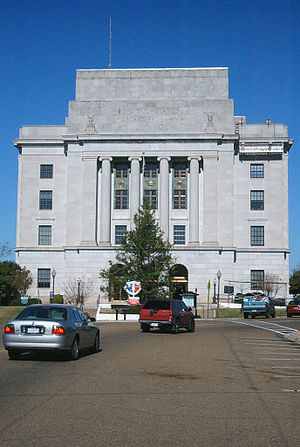 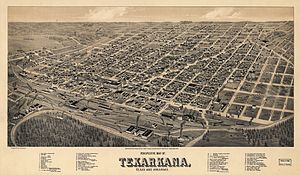 Texarkana was founded in 1873 on the junction of two railroads. The name is a portmanteau of TEXas, ARKansas, and nearby LouisiANA. One tradition tells of a Red River steamboat named The Texarkana, c. 1860. Another story mentions a storekeeper named Swindle in Red Land, Louisiana who concocted a drink called "Texarkana Bitters". A third account states that Col. Gus Knobel, a railroad surveyor, coined the name.[5] Local lore suggests that, before Texas's annexation by the US, lawlessness ruled in the area that at times was claimed by various nations.

In 1876, Texarkana, Texas, was granted a charter under an act of the Texas legislature, and a Texarkana, Texas, post office operated from 1886 to 1892. Later, Congressman John Morris Sheppard (D-TX) secured a postal order officially changing the name to "Texarkana, Arkansas-Texas".[5]

Little River County, Arkansas, was added to the SMSA in 1973.[9] In 1983, the official name was shortened to the Texarkana, TX–Texarkana, AR Metropolitan Statistical Area, which is still in use.[10] That same year, Little River County was removed from the MSA. The two-county MSA had a population of 137,486 in 2000.

Texarkana began as a railroad and lumber center, and developed in the 20th century as a regional agricultural processing, retail, wholesale, and service center.[11] Red River Army Depot and Lone Star Army Ammunition Plant were the largest regional employers from the 1940s through the 1970s. Paper mills near Ashdown and Atlanta, as well as other industrial facilities, brought new jobs to the area in the 1970s. Today the Texarkana area is a diversified economy whose pattern of employment categorized by industry is very similar to the entire state of Arkansas.[12]

State Line Avenue follows the Texas-Arkansas state line throughout much of Texarkana. The two "sides" of Texarkana are separate only from a political standpoint. Thousands of locals actually live in one state and work in the other.

Texarkana is located at the intersection of Interstate 30 and Interstate 49. It is situated approximately half way between Dallas, Texas, and Little Rock, Arkansas.

Texarkana Regional Airport[14] is located inside the northeastern city limits and is included in the National Plan of Integrated Airport Systems for 2011–2015, which categorized it as a primary commercial service airport.

Major routes in Texarkana include:

As of October 2015, new interchanges had been completed at the junctions of I-30/US 59, and I-30/I-49. Interstate 49 had been extended south to Shreveport with its northern extension planned into Kansas City along the U.S. Route 71 corridor. Multiple projects were under construction to relieve the strain on local roadways, including continuous access roads and the expansion of area highways and bridges.

Rail service in Texarkana is provided by: 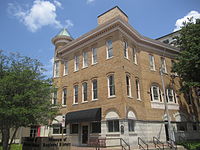 Notable historical buildings in Texarkana include the post office and federal building that straddle the state line, the Ace of Clubs House, The Perot Theater, and Texarkana Regional Museum. The Aces of Clubs House is shaped like a club on a playing card and supposedly inspired by a winning poker hand.

In the 1946, Texarkana was in fear of an unidentified serial killer who attacked eight people, five of which were murdered. The term "serial killer" wasn't around yet, but the town knew they were dealing with an unknown killer who was attacking couples on "lovers' lanes". The local paper dubbed him "The Phantom Killer". The attacks became known as the "Texarkana Moonlight Murders" by the news media. Since the killer was never identified or apprehended, the description of the killer came from the only two survivors. They described their attacker as six foot tall with a white mask over his head with holes cut out for his eyes and mouth. He had a pistol and a flashlight. They disagreed on his race. One survivor thought he was a light-skinned African American while the other thought he was a dark-tanned Caucasian man.

The attacks inspired the film The Town That Dreaded Sundown, released in 1976. It was written and directed by Charles B. Pierce, a former Texarkanan who played the comedic role as officer A.C. Benson, a clumsy patrolman. The movie also starred Ben Johnson, Andrew Prine and Dawn Wells. Most of the facts of the original case were fictionalized which created much of the myth and lore for several years. Many of the rumors are still believed and spread by locals. One of the more prominent rumors is that blood-stained clothing hidden by The Phantom was found in a school attic many years after the crime spree.

Over the years the case files from both police departments went missing.[15] All official files, photographs, evidence and notes are now lost. Some locals believe that the Phantom Killer died long ago, while some think he may still be alive. Some claim that he was a member of the local upper class aristocracy, which collaborated to keep his identity quiet to avoid scandal. The case was never solved and therefore still open.

The swampy terrain of Boggy Creek, near Fouke, Arkansas, a small Miller County town southeast of Texarkana, is the reputed home of an anthropoid cryptid similar in appearance and behavior to the Pacific Northwest's Bigfoot and Sasquatch, and to the Skunk Ape of Florida legend. A film dramatizing these stories, entitled The Legend of Boggy Creek, was released in 1972. Two sequels, Return to Boggy Creek (1977) and The Barbaric Beast of Boggy Creek, Part II (1985) (AKA Boggy Creek II: And the Legend Continues; the "official" sequel made by the original film's director, Charles B. Pierce) followed with very little commercial success (although The Barbaric Beast of Boggy Creek, Part II was featured in the tenth season of Mystery Science Theater 3000). Locals commonly refer to this creature as the "Fouke Monster" and a number of persons have reported seeing the creature in various locations in and around Fouke. Most of the reported sightings have occurred during the hours of darkness, which has contributed to the lack of adequate descriptions of the creature itself. The Fouke Monster's credibility is generally doubted.[16][17][18]