Textual criticism of the New Testament 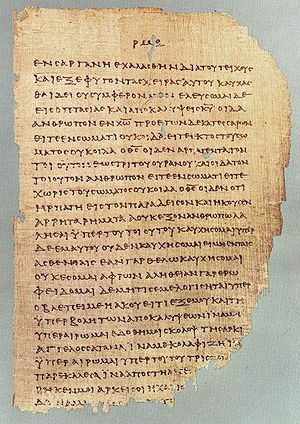 A folio from Papyrus 46, one of the oldest extant New Testament manuscripts

The sheer number of witnesses presents unique difficulties, chiefly in that it makes stemmatics in many cases impossible, because many copyists used two or more different manuscripts as sources. Consequently, New Testament textual critics have adopted eclecticism after sorting the witnesses into three major groups, called text-types. The most common division today is as follows:

The New Testament portion of the English translation known as the King James Version was based on the Textus Receptus, a Greek text prepared by Erasmus based on a few late medieval Greek manuscripts of the Byzantine text-type (1, 1rK, 2e, 2ap, 4, 7, 817).[3] For some books of the Bible, Erasmus used just single manuscripts, and for small sections made his own translations into Greek from the Vulgate.[4] However, following Westcott and Hort, most modern New Testament textual critics have concluded that the Byzantine text-type was formalised at a later date than the Alexandrian and Western text-types. Among the other types, the Alexandrian text-type is viewed by some as more pure than the Western and Byzantine text-types, however, this view is held by the minority of scholars, and so one of the central tenets in the current practice of New Testament textual criticism is that one should follow the readings of the Alexandrian texts unless those of the other types are clearly superior. Most modern New Testament translations now use an Eclectic Greek text (UBS5 and NA 28) that is closest to the Alexandrian text-type. The United Bible Societies's Greek New Testament (UBS5) and Nestle Aland (NA 28) are accepted by most of the academic community as the best attempt at reconstructing the original texts of the Greek NT.[5]

A minority position represented by The Greek New Testament According to the Majority Text edition by Zane C. Hodges and Arthur L. Farstad argues that the Byzantine text-type represents an earlier text-type than the surviving Alexandrian texts. This position is also held by Maurice A. Robinson and William G. Pierpont in their The New Testament in the Original Greek: Byzantine Textform, and the King James Only Movement. The argument states that the far greater number of surviving late Byzantine manuscripts implies an equivalent preponderance of Byzantine texts amongst lost earlier manuscripts. Hence, a critical reconstruction of the predominant text of the Byzantine tradition would have a superior claim to being closest to the autographs.

Another position is that of the Neo-Byzantine School. The Neo-Byzantines (or new Byzantines) of the 16th and 17th centuries first formally compiled the New Testament Received Text under such textual analysts as Erasmus, Stephanus (Robert Estienne), Beza, and Elzevir. The early 21st century saw the rise of the first textual analyst of this school in over three centuries with Gavin McGrath (b. 1960). A religiously conservative Protestant from Australia, his Neo-Byzantine School principles maintain that the representative or majority Byzantine text, such as compiled by Hodges & Farstad (1985) or Robinson & Pierpont (2005), is to be upheld unless there is a "clear and obvious" textual problem with it. When this occurs, he adopts either a minority Byzantine reading, a reading from the ancient Vulgate, or a reading attested to in the writings of an ancient Church Father (in either Greek or Latin) by way of quotation. The Neo-Byzantine School considers that the doctrine of the Divine Preservation of Scripture means that God preserved the Byzantine Greek manuscripts, Latin manuscripts, and Greek and Latin church writers' citations of Scripture over time and through time. These are regarded as "a closed class of sources" i.e., non-Byzantine Greek manuscripts such as the Alexandrian texts, or manuscripts in other languages such as Armenian, Syriac, or Ethiopian, are regarded as "outside the closed class of sources" providentially protected over time, and so not used to compose the New Testament text.[6] Other scholars have criticized the current categorization of manuscripts into text-types and prefer either to subdivide the manuscripts in other ways or to discard the text-type taxonomy.

Textual criticism is also used by those who assert that the New Testament was written in Aramaic (see Aramaic primacy).[7]

According to Bart D. Ehrman, "These scribal additions are often found in late medieval manuscripts of the New Testament, but not in the manuscripts of the earlier centuries," he adds. And because the King James Bible is based on later manuscripts, such verses "became part of the Bible tradition in English-speaking lands."[8]

Most modern Bibles have footnotes to indicate passages that have disputed source documents. Bible Commentaries also discuss these, sometimes in great detail.

These possible later additions include the following:[9][10]

Opinions are divided on whether Jesus is referred to as "unique [or only-begotten: Gk. monogenes] Son" or "unique [monogenes] God", in John 1:18[10]

1 Corinthians 14:33–35. Gordon Fee[11] regards the instruction for women to be silent in churches as a later, non-Pauline addition to the Letter, more in keeping with the viewpoint of the Pastoral Epistles (see 1 Tim 2.11–12; Titus 2.5) than of the certainly Pauline Epistles. A few manuscripts place these verses after 40[12]

Various groups of highly conservative Christians believe that when Ps.12:6–7 speaks of the preservation of the words of God, that this nullifies the need for textual criticism, lower, and higher. Such people include Gail Riplinger, Peter Ruckman, and others. Many theological organisations, societies, newsletters, and churches also hold to this belief, including "AV Publications", Sword of The LORD Newsletter, The Antioch Bible Society[13] and others. On the other hand, Reformation biblical scholars such as Martin Luther saw the academic analysis of biblical texts and their provenance as entirely in line with orthodox Christian faith. Many of these men called themselves Christian humanists[citation needed], precisely because textual criticism (usually of biblical texts) lay at the heart of their work.