Al-Ṣābiʾ Thābit ibn Qurra al-Ḥarrānī (Arabic: ثابت بن قرة‎‎, Latin: Thebit/Thebith/Tebit;[2] 826[3] – February 18, 901) was an Sabian mathematician, physician, astronomer, and translator who lived in Baghdad in the second half of the ninth century during the time of Abbasid Caliphate. He was not a Muslim (Sabian)

Ibn Qurra made important discoveries in algebra, geometry, and astronomy. In astronomy, Thabit is considered one of the first reformers of the Ptolemaic system, and in mechanics he was a founder of statics.[3]

Thabit was born in Harran (known as Carrhae in antiquity) in Higher Mesopotamia/Assyria (in modern-day Turkey). The city of Harran was never fully Christianized, unlike the rest of Mesopotamia. By the early Arabic era, the people of Harran were still adhering to the cult of Sin. Thabit and his pupils lived in the midst of the most intellectually vibrant, and probably the largest, city of the time, Baghdad. He occupied himself with mathematics, astronomy, astrology, magic, mechanics, medicine, and philosophy. Later in his life, Thabit's patron was the Abbasid Caliph al-Mu'tadid (reigned 892–902). Thabit became the Caliph's personal friend and courtier. Thabit died in Baghdad. After him the greatest Sabean name was Abu Abdallah Mohammad ibn Jabir Al-Battani. 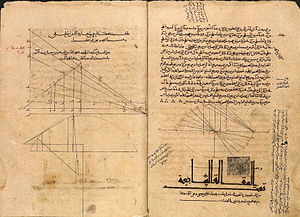 Thabit's native language was Syriac, which was the eastern Aramaic dialect from Edessa, and he was fluent in Greek and Arabic. He translated from Greek into Arabic works by Apollonius, Archimedes, Euclid and Ptolemy. He revised the translation of Euclid's Elements of Hunayn ibn Ishaq. He also rewrote Hunayn's translation of Ptolemy's Almagest and translated Ptolemy's Geography. Thabit's translation of a work by Archimedes which gave a construction of a regular heptagon was discovered in the 20th century, the original having been lost.

The medieval astronomical theory of the trepidation of the equinoxes is often attributed to Thabit. But it had already been described by Theon of Alexandria in his comments of the Handy Tables of Ptolemy. According to Copernicus Thabit determined the length of the sidereal year as 365 days, 6 hours, 9 minutes and 12 seconds (an error of 2 seconds). Copernicus based his claim on the Latin text attributed to Thabit. Thabit published his observations of the Sun.

In mathematics, Thabit discovered an equation for determining amicable numbers. He also wrote on the theory of numbers, and extended their use to describe the ratios between geometrical quantities, a step which the Greeks never took. In doing this Thabit changed the way of mathematics.

He is known for having calculated the solution to a chessboard problem involving an exponential series.[4]

He also described a Pythagoras theorem.[5]

In physics, Thabit rejected the Peripatetic and Aristotelian notions of a "natural place" for each element. He instead proposed a theory of motion in which both the upward and downward motions are caused by weight, and that the order of the universe is a result of two competing attractions (jadhb): one of these being "between the sublunar and celestial elements", and the other being "between all parts of each element separately".[6]

Only a few of Thabit's works are preserved in their original form.