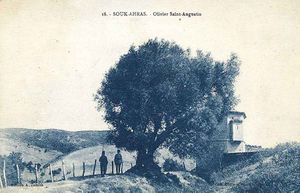 Thagaste (or "Tagaste") was a Roman colony in Berber North Africa. It is now called Souk Ahras. It is famous worldwide because it was the birthplace of Saint Augustine.[1]

Before Roman conquest Thagaste was just a small Numidian village, inhabited by a Berber tribe into which Augustine of Hippo was born in AD 354. His mother Saint Monica was a Christian and his father Patricius (with Roman roots) was at first a pagan who later converted to Christianity.

The Numidian city of Thagaste was situated in the north-eastern highlands of Numidia. It was about 60 miles (97 km) from Hippo Regius, (present day Annaba), 20 miles (32 km) southwest of Thubursicum (present day Khamissa), and about 150 miles (240 km) from Carthage (on the coast of present-day Tunisia).[2]

Thagaste was situated in a region full of dense forest.This region in ancient times was famous for its mounts that were used as a natural citadel against different invaders: the Romans, the Byzantines, the Vandals and the Arabs.

During the Roman period trading increased in the city, that flourished mainly under the rule of Septimius Severus. Thagaste became a Roman municipium in the first century of Roman domination.[3] The city was mentioned by Pliny the Elder. As a municipium, Thagaste was settled by a few Roman Italian immigrants, but was mainly inhabited by romanized native Berbers.[4]

Indeed, Roman historian Plinius (V,4,4) wrote about Tagaste, that was an important Christian center in Roman Africa, with a basilica and a Roman Catholic diocese that was the most important of Byzantine Numidia. There are 3 bishops of Thagaste historically known: Saint Firminus, Saint Alipius (friend of Saint Augustine) and Saint Gennarus.

There it is the tradition that Saint Augustine used to meditate under an olive tree in a hill of Thagaste: this tree is still existing and is the place of reunion even now for the followers of the Augustinian spirituality.

The Byzantines fortified with walls the city, that fell to the Arabs at the end of the seventh century. After centuries of neglect, the French colonists rebuilt the city that is now called Souk Ahras.