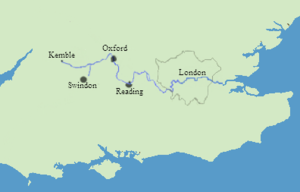 The course of the River Thames

The Thames Valley region is a loose term for the English counties or parts of those counties roughly following the course of the River Thames as it flows from Oxfordshire in the west to London in the east. It is generally taken to include parts of Oxfordshire, Buckinghamshire, Berkshire, Surrey and sometimes two boroughs of southwest London. It rarely includes either the source of the Thames at Thames Head in Gloucestershire, or any part of Wiltshire, and does not include the informal entities Central London or the Thames Gateway which surrounds the Thames Estuary.

The Thames Valley region can be compared with the longer and narrower M4 corridor, i.e. the area within a few miles of the M4 motorway, which runs East-West extending from Hammersmith, London through Berkshire (interrupted by two small salients of Buckinghamshire) and then Wiltshire, South Gloucestershire and over the River Severn via the Second Severn Crossing, a Toll Bridge to South Wales.

The Thames Valley is one of the wealthiest parts of the European Union, aided by a skilled workforce and its accessibility to London. Historic trades have been replaced by wealth-generating knowledge-based industries: in particular, information and communications technology and life sciences.

Productivity was £49,000 per worker in 2006, which was £8,600 higher than the average for the wider region of south-east England. The knowledge economy provides 29% of employment, compared with the national average of 17%; and 37% of people in employment hold a degree. 20% of Thames Valley workers are employed in managerial and senior positions, for which the UK-wide average is 15%.[citation needed] The direct labour force amounts to 1 million people, but the total workforce within an hour of the Thames Valley towns is close to 3.7 million.[citation needed]

Since 2002, the Thames Valley has been the UK's fastest growing region, averaging 3.5% per year economic growth after inflation, well ahead of the 2.5% national average.[citation needed] Its economy was valued at £32 billion in 2007.[1]

The Thames Valley is a major tourist destination in the United Kingdom for domestic and international visitors. Attractions close to the river include:

The only long-distance walking and cycling route through the whole region is the Thames Path. Scenic landscapes include the Chiltern Hills, Ridgeway National Trail, and Windsor Great Park.

Luxury spa hotels and golf resorts cater to the luxury and leisure stay market. Regattas, food fairs and fun fairs in the towns mentioned above and traditional centres of population are among the attractions for a regional audience, as well as theme parks (principally Thorpe Park in Surrey). Dorney Lake is a major national venue for kayaking, canoeing and rowing. The American Community Schools, England are centred on the area. Wentworth and Sunningdale Golf Clubs are also in the area. Five horse racing venues are within 20 kilometres (12 miles) of the river.