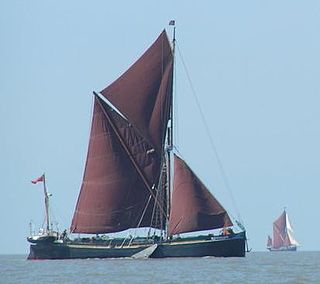 A Thames sailing barge was a type of commercial sailing boat common on the River Thames in London in the 19th century. The flat-bottomed barges were perfectly adapted to the Thames Estuary, with its shallow waters and narrow rivers.

The barges also traded much further afield, to the north of England, the South Coast and even to continental European ports. Cargoes varied enormously: bricks, mud, hay, rubbish, sand, coal and grain, for example. Due to the efficiency of a Thames barge's gear, a crew of only two sufficed for most voyages, although by today's standards it would have been hard physical work at times.

The vast majority of barges were wooden hulled (although a significant number were also built in steel), between 80–90 ft (24–27 m) long with a beam of around 20 feet (6 m). The hull form was as distinctive as their rig, being flat-bottomed with a degree of flare to the sides and plumb ends. The stern was a transom, shaped like a section through a champagne glass, on which was hung a large rudder. The hull was mainly a hold with two small living areas in the bow and stern, and access was through two large hatchways, the smaller before the main mast and a much larger aperture behind.

They were usually spritsail rigged on two masts. Most had a topsail above the huge mainsail and a large foresail. The mizzen was a much smaller mast on which was set a single sail whose main purpose was to aid steering when tacking. The rig also allowed a relatively large sail area on the upper part of the mast, to catch wind when moored ships, buildings or trees blocked wind on the water's surface. Sail areas varied from 3000-5000 sq ft (278.8-464.5 sq m) depending on the size of the barge. The typical, rusty-red colour of the flax sails was due to the dressing used to waterproof them (traditionally made from red ochre, cod oil, and seawater). No auxiliary power was used originally but many barges were fitted with engines in later years.

A barge with no topsail - or top mast sailing stumpy-rigged - enabled the barge to pass under London's bridges, get in close to shore for offloading goods and get far up river.

In good conditions, sailing barges could attain speeds over 12 knots, and their leeboards allowed them to be highly effective windward performers. The unusual sprits'l rig allowed any combination of sails to be set: even the topsail on its own could be effective in some conditions.

The flat-bottomed hull made these craft extremely versatile and economical. They could float in as little as 3 feet (1 m) of water and could dry out in the tidal waters without heeling over. This allowed them to visit the narrow tributaries and creeks of the Thames to load farm cargoes, or to dry out on the sand banks and mudflats to load materials for building and brickmaking (it was no coincidence that their use peaked while London was expanding rapidly). The main mast could be lowered to clear bridges. Furthermore, unlike most sailing craft, these barges could sail completely unballasted — a major saving in labour and time.

Their heyday came at the turn of the 20th century when over 2000 were on the registry. That century saw a steady decline in their numbers. The last Thames barge to trade entirely under sail was the Everard-built Cambria in 1970, owned by Captain A. W. (Bob) Roberts. Roberts sailed the Cambria for more than twenty years, and gained a reputation for hard sailing and fast passages in other Everard barges.

There was never a shortage of youths ready to sail in the barges, but few could put up with the workload, the weather conditions and the sparse income of the "mate's berth". Following the Second World War, the coastal barge trade diminished as the nation became more mechanised. Cargoes went by road instead of by sea, squeezing the purses of the barge owners, until most of the once-handsome barges were given motors and relegated to short, lightering passages within the Thames Estuary.

Today, a small number of sailing barges remain, converted to pleasure craft and commonly sailed in the annual races which take place in the Thames Estuary. One of the leading individuals involved in preserving and maintaining Thames barges was Jane Benham, who was awarded the MBE for her work in creating and running a charitable trust devoted to educational sailing voyages and the preservation of barges.

Some barges were part of the fleet of 'Little Ships' that took soldiers back to England from Dunkirk. One of these, Pudge, was harmed by a mine but has been fixed up and is still used on the rivers today.

Inspired by a mention of the Norfolk Wherry Trust in Hervey Benham's book Down Tops'l, the Thames Sailing Barge Trust was founded on 15 April 1952 in the cabin of the sailing barge George Smeed, anchored at Blacktail Spit in the Thames estuary.[3] The committee members were Jim Lawrence (chairman), Colin Leggett (treasurer), John Kemp (organizing secretary), and Tom Hawkins. In 1955, the trust bought the sailing barge Memory, which it operated as a cargo vessel until 1960 when the trust was dissolved. The Thames Sailing Barge Trust referred to here was not the same body as the current organization with the same name.

The Memory was bought from the trust by Sailtrust Limited, a partnership between John Kemp and Brian Beer. Following a suggestion by Hervey Benham, she was converted for use as an adventure training ship. However, the company was unable to make sufficient money from adventure training and they operated the Memory as a weekend charter vessel with John Kemp as the skipper. The Memory was the first sailing barge to engage in charter work.

In April 1965, Sailtrust Ltd were contracted to the London Borough of Redbridge to take parties of school children sailing, each week from April to October. This contract lasted for eleven years. During the second year of this contract, the Board Of Trade tightened up the regulations for charter vessels and the Memory could no longer be used for that purpose. She was replaced by the auxiliary sailing barge Thalatta, previously owned by R & W Paul and operated as a cargo ship until 1966. Both barges were skippered by John Kemp, with Jane Benham as mate. Operation of the Thalatta was eventually taken over by the East Coast Sail Trust.

The barges' performance was perfected through the annual sailing matches, in which they competed for trophies and cash prizes. The matches are credited with encouraging improvements in design, leading to the craft's highly efficient final form. They were begun in 1863 by a wealthy owner called Henry Dodd. Dodd was a plough boy from Hackney, London, who made his fortune carrying the city's waste to the country on the barges. He may well have been the model for Charles Dickens' character the Golden Dustman, in Our Mutual Friend. On his death in 1881, Dodd left £5000 for future match prizes.

The matches have ceased and been reinstituted several times, and are now considered the world's second oldest sailing race (after the America's Cup). The course was originally from Erith upriver, but as of the early 20th century the start was moved to the Lower Hope downriver from Gravesend into the Estuary and back to Gravesend