The Basic School (TBS) is where all newly commissioned and appointed (for warrant officers) United States Marine Corps officers are taught the basics of being an "Officer of Marines." The Basic School is at Camp Barrett, Quantico, Virginia, in the south-west of the Marine Corps Base Quantico complex. Each year over 1,700 new officers are trained, representing such diverse commissioning sources as the U.S. Naval Academy, Naval ROTC, the Platoon Leaders Class program (PLC-Air, PLC-Ground, PLC-Law) for non-NROTC college and university students, Officer Candidates School, and Marine Corps Limited Duty Officer (LDO) and Warrant Officer accession programs.

Philosophy of instruction at TBS

The School's "Five Horizontal Themes" define the expectations of every student officer at TBS. 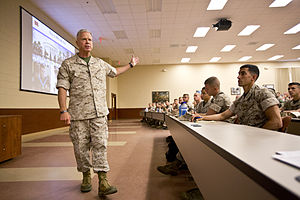 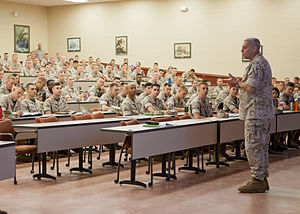 The Assistant Commandant of the Marine Corps, Gen. John M. Paxton, Jr., speaks to students of Bravo Company at The Basic School in June 2014.

After earning a commission, Unrestricted Line Officer Marine lieutenants complete the Officer Basic Course prior to beginning their Military Occupational Speciality (MOS) qualification training to prepare them for service in the Fleet Marine Force or other operating forces assignments (viz., Marine Corps Security Force Regiment or the Marine Corps Embassy Security Group). The majority of Marine Corps officers are commissioned through the USMC Officer Candidate School (OCS), most of the balance are commissioned through the Marine Corps option at either the U.S. Naval Academy or the Naval Reserve Officer Training Corps (NROTC) at a civilian college or university. (Annually, there are a few officers who graduate from one of the other US federal service academies who are granted permission to receive USMC commissions.) Restricted Line/Limited Duty Officers are direct commissioned from the chief warrant officer ranks as either a first lieutenant or captain and do not attend BOC; however, as warrant officers they have already completed the WOBC at TBS prior to beginning their officer service in the operating forces.

Most officers attend BOC as a second lieutenant immediately after commissioning at OCS or within a few months of graduation and commissioning from either the USNA or an NROTC program. Some newly commissioned officers may serve a short period of time in an interim assignment (such as an assistant athletic coach at the USNA) before beginning TBS/BOC. A few officers attend BOC as a first lieutenant because they were commissioned through the Platoon Leaders Class (PLC Law) program, which permits them to attend law school as second lieutenants and then attend TBS/BOC after promotion to first lieutenant upon receiving their law degree. In very rare cases, an officer who receives an initial commission in another branch of the US armed forces, and who has already been promoted to first lieutenant, may receive an interservice transfer to the Marine Corps and attend TBS as a first lieutenant.

Nearing completion of BOC, lieutenants are selected for an MOS, including approximately 1/3 of the officers to Infantry (includes reconnaissance and light armored reconnaissance), another 1/3 to Marine Aviation (including Naval Aviators - aircraft pilots, Naval Flight Officers - aircraft weapons and sensor systems officers, and aviation support), and the remaining 1/3 to combat support, combat service support, or Command element (command and control - C4ISTAREW) positions.

Following BOC, the officer will attend one or more additional schools to be trained in their specialty, and then assigned to a unit in the Fleet Marine Force or other operating forces of the Marine Corps.

Marine warrant officers attend a 16-week training regime similar in scope and instruction to the 28-week course required of second lieutenants, which is shortened due to the prior experience possessed by the newly appointed warrant officers. They are assigned to India Company at Camp Barrett.