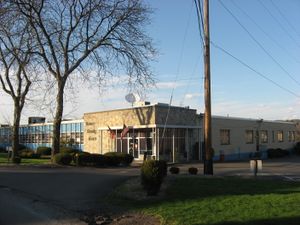 Offices of the Times in Beaver

The Beaver County Times is a daily newspaper published in Beaver, Pennsylvania, United States and serving the north-western Pittsburgh suburbs. The Times is a direct descendant of many of Beaver County's newspapers, starting with the Minerva, first published in 1807, and generally believed to have been the county's first newspaper.[1] The Beaver Times was founded by Michael Weyland and was published from 1851 to 1895, when the name was changed to the Beaver Argus. It was changed again to The Daily Times, which was published from 1909 to 1946 and operated by John L. Stewart and E. L. Freeland. It was sold in 1946 to S. W. Calkins, who combined it with the Aliquippa Gazette, which he acquired in 1943. The paper was known as The Beaver Valley Times until 1956, when it became The Beaver County Times after its acquisition of the Ambridge Daily Citizen. In 1979, The Times purchased the only other daily newspaper in the county, The News Tribune of Beaver Falls.

One of the paper's biggest milestones was when the publications changed from evening to morning on April 7, 1997. The newspaper is currently operated and run by Calkins Media, which also publishes newspapers in Uniontown, Doylestown, and Levittown, Pennsylvania, Willingboro, New Jersey, and Homestead, Florida.

Archival issues of The Beaver County Times can be viewed online at Google News.[2]