The Birth of Venus

From Infogalactic: the planetary knowledge core
Jump to: navigation, search
For other uses, see The Birth of Venus (disambiguation). 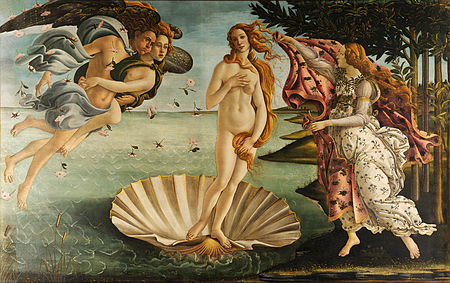 The Birth of Venus (Italian: Nascita di Venere [ˈnaʃʃita di ˈvɛːnere]) is a painting by Sandro Botticelli generally thought to have been painted in the mid 1480s. It has long been suggested that Botticelli was commissioned to paint the work by the Medici family of Florence, specifically Lorenzo di Pierfrancesco de' Medici under the influence of his cousin Lorenzo de' Medici, close patron to Botticelli. However, there are no documents associated with the painting, and its first identification with the Medici family only comes in the 1550 edition of Vasari's Lives. It depicts the goddess Venus, having emerged from the sea as an adult woman, arriving at the shore (which is related to the Venus Anadyomene motif). The painting is on display at the Uffizi Gallery in Florence, Italy.

The iconography of The Birth of Venus is similar to a description of the event (or rather, a description of a sculpture of the event) in a poem by Angelo Poliziano, the Stanze per la giostra.[1] No single text provides the precise imagery of the painting, however, which has led scholars to propose many sources and interpretations.[2] Art historians who specialize in the Italian Renaissance have found a Neoplatonic interpretation, which was most clearly articulated by Ernst Gombrich, to be the most enduring way to understand the painting. Botticelli represented the Neoplatonic idea of divine love in the form of a nude Venus.[3]

For Plato – and so for the members of the Florentine Platonic Academy – Venus had two aspects: she was an earthly goddess who aroused humans to physical love or she was a heavenly goddess who inspired intellectual love in them. Plato further argued that contemplation of physical beauty allowed the mind to better understand spiritual beauty. So, looking at Venus, the most beautiful of goddesses, might at first raise a physical response in viewers which then lifted their minds towards the godly.[5] A Neoplatonic reading of Botticelli's Birth of Venus suggests that 15th-century viewers would have looked at the painting and felt their minds lifted to the realm of divine love.

More recently, questions have arisen about Neoplatonism as the dominant intellectual system of late 15th-century Florence,[6] and scholars have indicated that there might be other ways to interpret Botticelli's mythological paintings. In particular, both Primavera and Birth of Venus have been seen as wedding paintings that suggest appropriate behaviors for brides and grooms.[7]

Yet another interpretation of the Birth of Venus (whose title derives from Vasari but whose action perhaps better represents the Arrival of Venus) is provided here by its author, Charles R. Mack. This interpretation has not been adopted by Renaissance art historians in general,[8] and it remains problematic, since it depends on the painting being commissioned by the Medici, yet the work is not documented in Medici hands before 1550. Mack sees the painting as an allegory extolling the virtues of Lorenzo de' Medici.[9] According to his reading of the painting, the scene was inspired by the text in a Homeric hymn published in Florence in 1488 by the Greek refugee Demetrios Chalkokondyles:

Of august gold-wreathed and beautiful
Aphrodite I shall sing to whose domain
belong the battlements of all sea-loved
Cyprus where, blown by the moist breath
of Zephyros, she was carried over the
waves of the resounding sea on soft foam.
The gold-filleted Horae happily welcomed
her and clothed her with heavenly raiment.[10]

But something more than a rediscovered Homeric hymn was likely in the mind of the Medici family member who commissioned this painting from Botticelli. The painter and the humanist scholars who probably advised him would have recalled that Pliny the Elder had mentioned a lost masterpiece of the celebrated artist, Apelles, representing Venus Anadyomene (Venus Rising from the Sea). According to Pliny, Alexander the Great offered his mistress, Pankaspe, as the model for the nude Venus and later, realizing that Apelles had fallen in love with the girl, gave her to the artist in a gesture of extreme magnanimity. Pliny went on to note that Apelles' painting of Pankaspe as Venus was later "dedicated by Augustus in the shrine of his father Caesar." Pliny also stated that "the lower part of the painting was damaged, and it was impossible to find anyone who could restore it. . . . This picture decayed from age and rottenness, and Nero... substituted for it another painting by the hand of Dorotheus".

Thus, in a sense, what the mighty Romans could not restore, their worthy successors, the Florentines, through the hand of Botticelli, could recreate. Pliny also noted a second painting by Apelles of Venus "superior even to his earlier one," that had been begun by artist but left unfinished. Once again, Botticelli, in his version of the Birth of Venus, might be seen as completing the task begun by his ancient predecessor, even surpassing him. Giving added support to this interpretation of Botticelli as a born-again Apelles is the fact that that very claim was voiced in 1488 by Ugolino Verino in a poem entitled "On Giving Praise to the History of Florence."[11]

Such a deliberately re-creative act as Botticelli may have performed with his Birth of Venus would go a long way towards explaining the curious flatness and linearity of the painting, which seem so very out of keeping with the direction of Renaissance art and with Botticelli's own approach to painting. Was the two-dimensionality of this painting a deliberate attempt to replicate the style of ancient painting as found on Greek vases or on the walls of Etruscan tombs?[12]

While Botticelli might well have been celebrated as a revivified Apelles, his Birth of Venus also testified to the special nature of Florence's chief citizen, Lorenzo de' Medici. Although it now seems that the painting was executed for another member of the Medici family, it likely was intended to celebrate and flatter its head, Lorenzo de' Medici. Tradition associates the image of Venus in Botticelli's painting with the lovely Simonetta Cattaneo Vespucci, with whom it is suspected both Lorenzo and his younger brother, Giuliano, were much enamored. Simonetta was, not coincidentally, born in the Ligurian seaside town of Portovenere ('the port of Venus'). Thus, in Botticelli's interpretation, Pankaspe (the ancient living prototype of Simonetta), the mistress of Alexander the Great (the Laurentian predecessor), becomes the lovely model for the lost Venus executed by the legendary Apelles (reborn through the recreative talents of Botticelli), which ended up in Rome, installed by Emperor Augustus in the temple dedicated to Florence's supposed founder Julius Caesar. In the case of Botticelli's Birth of Venus, the suggested references to Lorenzo, supported by other internal indicators such as the stand of laurel bushes at the right, would have been just the sort of thing erudite Florentine humanists would have appreciated. Accordingly, by overt implication, Lorenzo becomes the new Alexander the Great with an implied link to both Augustus, the first Roman emperor, and even to Florence's legendary founder, Caesar himself. Lorenzo, furthermore, is not only magnificent but, as was Alexander in Pliny's story, also magnanimous, as well. Ultimately, these readings of the Birth of Venus flatter not only the Medici and Botticelli but all of Florence, home to the worthy successors to some of the greatest figures of antiquity, both in governance and in the arts.[13]

These essentially pagan readings of Botticelli's Birth of Venus should not exclude a more purely Christian one, which may be derived from the Neoplatonic reading of the painting indicated above. Viewed from a religious standpoint, the nudity of Venus suggests that of Eve before the Fall as well as the pure love of Paradise. Once landed, the goddess of love will don the earthly garb of mortal sin, an act that will lead to the New Eve – the Madonna whose purity is represented by the nude Venus. Once draped in earthly garments she becomes a personification of the Christian Church which offers a spiritual transport back to the pure love of eternal salvation. In this case the scallop shell upon which this image of Venus/Eve/Madonna/Church stands may be seen in its traditionally symbolic pilgrimage context. Furthermore, the broad expanse of sea serves as a reminder of the Virgin Mary's title stella maris, alluding both to the Madonna's name (Maria/maris) and to the heavenly body (Venus/stella). The sea brings forth Venus just as the Virgin gives birth to the ultimate symbol of love, Christ.[14]

Rather than choosing one of the many interpretations offered for Botticelli's depiction of the Birth (Arrival?) of Venus it might be better to view it from a variety of perspectives. This layered approach—mythological, political, religious—was intended.[15]

Botticelli's art was never fully committed to naturalism; in comparison to his contemporary Domenico Ghirlandaio, Botticelli seldom gave weight and volume to his figures and rarely used a deep perspectival space. In the Birth of Venus, Venus' body is anatomically improbable, with elongated neck and torso. Her pose is impossible: although she stands in a classical contrapposto stance, her weight is shifted too far over the left leg for the pose to be held. Moreover, her positioning on the edge of the scallop shell (which cannot be identified as real), would certainly cause it to tip over. The bodies and poses of the winds to the left are even harder to figure out. The background is summary, and the figures cast no shadows. It is clear that this is a fantasy image.[4]

The pose of Botticelli's Venus is reminiscent of the Venus de' Medici, a marble sculpture from classical antiquity in the Medici collection which Botticelli had opportunity to study. The figure of Venus is also similar to Praxiteles' sculpture of Aphrodite. In this version of her birth she rises from the sea already a grown woman.

Since classical antiquity, the sea shell has been a metaphor for a woman's vulva.[16]