From Infogalactic: the planetary knowledge core
(Redirected from The Blade (Toledo))
Jump to: navigation, search
"Toledo Blade" redirects here. It is not to be confused with Toledo Blades.

The Blade, also known as the Toledo Blade, is a daily newspaper in Toledo, Ohio, in the United States, first published on December 19, 1835.[2]

The first issue of what was then the Toledo Blade was printed on December 19, 1835. It has been published daily since 1848 and is the oldest continuously run business in Toledo.[3]

In 2004 The Blade won the Pulitzer Prize for Investigative Reporting with a series of stories entitled "Buried Secrets, Brutal Truths".[4] The story brought to light the story of the Tiger Force, a Vietnam fighting force that brutalized the local population. In 2006, The Blade was a finalist for a Pulitzer Prize, and winner of the National Headliner Award, for breaking the scandal in Ohio known as Coingate.

As of 2015, the editor in chief is John Robinson Block.[5] His family purchased the paper in 1926 and they also own the media conglomerate Block Communications, which owns cable systems, television stations, and an Internet service network, Buckeye Express.

As of 2008[update] The Blade had the 83rd largest daily newspaper circulation in the United States.[1]

The Toledo Blade was named for the famed swordsmithing industry of the original city of Toledo, Spain. Its motto, on the nameplate below the title, is "One of America's Great Newspapers."

In 2007 Blade photojournalist Allan Detrich left the Blade when it was discovered that he had digitally altered a photo that was published on the front page of the March 31, 2007, edition. A subsequent investigation revealed that he had digitally altered and submitted 79 photos during the first 14 weeks of 2007, 58 of which ran either in The Blade or on its website.[6][7]

Members of several unions worked without contracts from March to August 2006. Over the course of August 2006, The Blade locked out over 25% of all of its employees. The strike and lockout ended in May 2007.[8]

In May 2014, Block Communications announced plans to close The Blade's production facility, including the printing presses, located in the downtown headquarters building.[9] 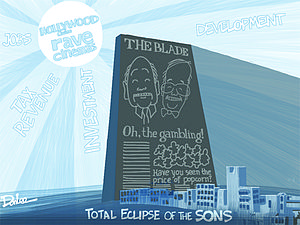 In October 2011, The Blade filed a lawsuit against rival publication the Toledo Free Press, claiming that former Blade general manager and current Free Press publisher Thomas F. Pounds violated a 2004 separation agreement containing a non-compete clause.[10] According to the Free Press, The Blade took exception to an editorial cartoon criticizing The Blade's stance on downtown development plans by Rave Cinemas and Hollywood Casino Toledo; The Blade cited the cartoon among the grounds for its lawsuit: "On or about August 21, 2011, Pounds ... permitted Toledo Free Press to publish a cartoon that depicted a characterization of John R. Block and Allan Block together with The Blade as casting an eclipsing shadow on jobs, tax revenue, investment and development in Toledo, Ohio."[11]

In December 2011, the Free Press responded to the lawsuit and filed a counterclaim, asserting that Blade owners Block Communications were "attempting to exercise prior restraint" on the Free Press and that since the non-compete agreement expired in 2005, the Blade's use of it as a legal weapon in 2011 was "simply as a tool to economically harm" the Free Press and its publisher, and "well beyond the bounds of fair and legal competition."[12]