The Blood on Satan's Claw

The Blood on Satan's Claw (also released as Satan's Skin) is a 1970[2] British horror film made by Tigon British Film Productions and directed by Piers Haggard.[3] The film was written by Robert Wynne-Simmons, with additional material by Piers Haggard, and stars Patrick Wymark, Linda Hayden and Barry Andrews. It is set in early 18th century England, and tells the story of a village taken over by demonic possession.

In his 2010 BBC documentary series A History of Horror, writer and actor Mark Gatiss referred to the film as a prime example of a short-lived subgenre he called "folk horror", grouping it with 1968's Witchfinder General and 1973's The Wicker Man.[4][5] The film was to be Patrick Wymark's last English language film, and was released three months after his death.

In early 18th century England, Ralph Gower (Barry Andrews) uncovers a deformed skull with one eye and strange fur on it while ploughing a field. Ralph insists that local judge (Patrick Wymark) look at it, but the skull has vanished and the judge disregards Ralph's supernatural fears. Later, many people in the village become affected by its supernatural power, including a young woman (Tamara Ustinov) who sprouts a claw, and children who find a strange claw and then behave oddly and grow patches of fur on their bodies.

Peter Edmonton rides to a neighbouring town to find the judge and bring him back to eradicate the evil. After doing some research in a book about witchcraft, the judge returns. The judge learns that the evil children in the village will gather nearby, and he takes some men to the spot. A satanic beast, whose remains had been found by Gower, is responsible for the evil infecting the populace. The judge and his party find the beast at their destination and slay it.

Actress Roberta Tovey has an uncredited role as the coven member who lures Padbury's character to her death.

Peter Andrews and Malcolm Heyworth had formed a production company called Chilton Films. They signed a deal with Hemdale Film Corporation, which was then associated with Tigon Films.[1]

The film was originally envisioned as consisting of three loosely connected but separate stories. It was then decided to make it all part of the one story. Robert Wynne-Simmons was hired to write the stories. He later said that he was inspired in part by the Manson Family and the Mary Bell child murders.[1] He later elaborated:

The central theme of the whole film was the stamping out of the old religions. Not by Christianity, but by an atheistic belief that all sorts of things must be blocked out of the mind. So the Judge represents a dogged enlightenment, if you like, who is saying 'Don't let these things lurk in dark corners. Bring it out into the open and then get rid of it. When it becomes a fully fledged cult, it will show itself.[6]

The original script was set in the Victorian era but the producers felt this period had been done too often so was relocated to the early eighteenth century, slightly later than the period used for Witchfinder General.[1] Wynne-Smith said that he was also specifically asked to include a number of elements from Witchfinder General in the movie, such as The Book of Witches and a witch drowning sequence.[7]

Piers Haggard was signed to direct on the basis of his debut feature, despite not being very familiar with horror movies. Haggard worked closely on the script with the writer:

All the powerful, imaginative sequences of horror are Robert’s invention. Nothing was taken away in the credit from him for conceiving that sequence of experiences and images and the whole story. My writing contribution is entirely in the area of character, of character subtlety, trying to make family relationships resonate. Some of the non-action stuff is mine, like the kids wandering through the woods and you’re haunted by fears and anxieties and so on. That stuff is mostly mine, so that was my contribution, to try and thicken the texture[7]

Haggard says Linda Hayden had to be used as she was under contract to Tony Tenser. Tamara Ustinov was cast in part because of her name. The role of the judge was originally offered to Peter Cushing, who declined it due to his wife's illness; Christopher Lee was considered, but his fee was too high for the budget so Patrick Wymark was cast instead.[1] 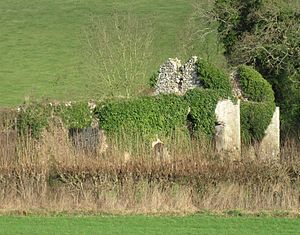 The ruined church in the film is at Bix Bottom in Oxfordshire. Other scenes were filmed at Black Park near Iver Heath, Buckinghamshire, as well as at Pinewood Film Studios.[8]

Haggard says there were a number of titles.:

It was initially The Devil’s Touch and then Satan’s Skin. I think Satan’s Skin is the best title. When it was sold to America, this wonderful old showman Sam Arkoff of AIP bought it and they released it as Blood on Satan’s Claw. Tony Tenser then changed the title and I thought that was a bit infra-dig, a bit naff. So I think Satan’s Skin was my favourite.[7]

The movie was a commercial disappointment. "It never made much money," said Haggard. "It wasn’t a hit. From the very beginning it had minority appeal. A few people absolutely loved it but the audiences didn’t turn out for it."[7]

The film's soundtrack was composed by Marc Wilkinson, who had worked with Haggard at the National Theatre. "[He] had a wonderful command of strange sounds," said the director. "He wasn’t somebody who would ever give you a stock sound. And I think he absolutely excelled himself. It’s certainly one of the best scores I’ve ever had for a film."[7]

The soundtrack was released on CD and limited edition vinyl LP by Trunk Records in 2007.