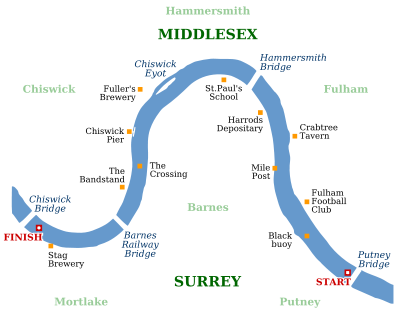 Championship Course on a flood tide (e.g. for the Boat Race). The Start and Finish are reversed when racing on an ebb tide. "Middlesex" and "Surrey" denote banks of the Thames Tideway, not the actual English counties 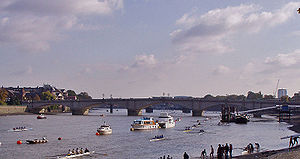 The stretch of the River Thames between Mortlake and Putney in London, England is a well-established course for rowing races, most famously the Oxford and Cambridge Boat Race. It is often referred to as The Championship Course. The course is on the tidal reaches of the river often referred to as the Tideway.

In 1845 it was agreed to stage the Boat Race (which had on five previous occasions been contested from Westminster Bridge to Putney) on a course from 'Putney Bridge to Mortlake Church tower'.[1] The aim was to reduce the interference from heavy river traffic on the race.

The following year, a race for the Professional World Sculling Championship moved to the course for the first time. The Wingfield Sculls followed in 1861.

The course was later defined by two stones on the southern bank of the river, marked "U.B.R." for University Boat Race; one just downstream of Chiswick Bridge, close to The Ship public house, and the other just upstream of Putney Bridge. The course distance is 4 miles and 374 yards (6,779 m), as measured along the centre of the river's stream.

Races are always conducted in the same direction as the tide: from Mortlake to Putney on an ebb tide or from Putney to Mortlake on a flood tide.

In April 1869 the Harvard University Boat Club challenged Oxford University Boat Club to an "International University Boat-Race" of coxed fours on the Boat Race course. The event took place on 27 August 1869 and was narrowly won by Oxford. The new Atlantic cable allowed daily reports to be received by all major newspapers across America within 23 minutes of the finish. U.S. public interest in the event was huge with more publicity than any sporting event to date, and within two years of the event the "newly awakened interest in rowing at many of the most noted seats of learning" doubled the number of boat clubs in the U.S., and lead to the formation of the Rowing Association of American Colleges.[2]

Principal landmarks, often used when racing, include (in order from Mortlake to Putney):

Rowing clubs along the course 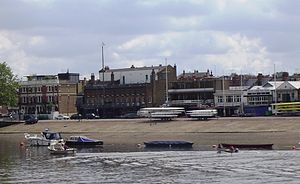 Boat houses on the river bank near Putney