The Coffee Bean & Tea Leaf (sometimes shortened to simply "Coffee Bean" or "The Coffee Bean") is an American coffee chain founded in 1963. It is owned and operated by International Coffee & Tea, LLC, which has its corporate headquarters in Los Angeles, California. As of August 2015, the chain has over 1000 self-owned and franchised stores in the United States and 24 other countries.[3][4] 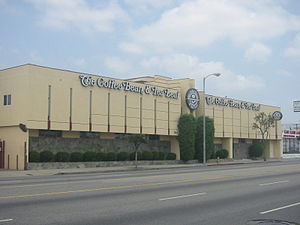 The company was founded by Herbert Hyman in September 1963, as a coffee service for offices. He and his wife Mona, who he married in 1966, honeymooned in Sweden, where they discovered quality coffee. This sparked the decision to import, roast and sell gourmet coffee in Los Angeles, opening the first Coffee Bean store in 1968 in the Los Angeles neighborhood of Brentwood. Innovations included selling whole beans and touting their country of origin, and allowing customers to observe the beans being roasted and sample varieties before making a purchase. Hyman is considered to be instrumental in the creation of the gourmet coffee industry in the US. He died on April 28, 2014, at the age of 82.[5]

By the 1970s, Coffee Bean had expanded to 10 stores in Southern California, and added exotic teas to the menu. In the summer of 1987, an employee brought a blender to a Westwood store, mixing together ice, coffee extract and chocolate powder, paving the way for the company's signature Ice Blended drinks.[5][6] With the invention of the Ice Blended, the Coffee Bean saw a surge in popularity.[7] The drink was a predecessor to the Starbucks Frappuccino.[8] In 1991, when it was first planning to expand into Los Angeles, Starbucks tried to purchase Coffee Bean, but Hyman turned them down. The opening of Starbucks stores in Los Angeles unexpectedly helped Coffee Bean's business, by driving curious customers to the area.[9]

In 1996, the Hymans sold the Asian franchise rights to Singaporean brothers Victor Sassoon and Sunny Sassoon.[6] The Sassoons quickly expanded the company in the US and internationally, opening the first outlet in Singapore in 1996, and in Malaysia the following year.[6] Within two years, they had opened 29 stores in Singapore and Malaysia, almost as many stores as the Hymans had opened in their 35 years of ownership.[10] In 1998, the Sassoons, along with longtime friend Severin Wunderman, purchased the parent company, International Coffee & Tea LLC, from the Hymans, and took it global.[6][10][11] Victor Sassoon works out of Singapore, Sunny Sassoon works in Los Angeles, and Wunderman is a silent partner with no role in management.[10] International Coffee & Tea, LLC remains the name of the holding company.[10]

Sunny Sassoon served as president and CEO from 1998 until 2008, when he moved to the executive chairman position.[12] In 2008, Mel Elias (Sassoon's brother-in-law) assumed the role of president and CEO of the company, after spending seven years as chief operating officer.[10][13] In September 2013, a significant equity position in Coffee Bean was acquired from International Coffee & Tea by US-based Advent International, in partnership with South Korea-based Mirae Asset Private Equity and Taiwan-based CDIB Capital. The Sassoon family remains a large shareholder.[14][15] On January 2, 2014, John Dawson assumed the position of president and CEO.[16]

Jay Isais, Coffee Bean's senior director of coffee, oversees the quality of the blending and roasting of all the company's beans. A founding member of the Roasters' Guild, he joined Coffee Bean in 2000.[19] He is one of approximately 400 licensed Q graders worldwide, passing an exam of sensory tests administered by the Specialty Coffee Association of America's CQI division.[24] 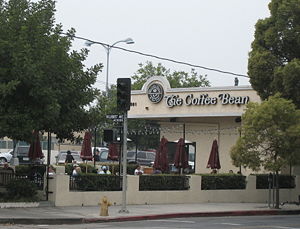 The company's teas fall into seven categories: Green, Black, Oolong, Herbal Infusion, Decaffeinated, Flavored and Tea Master’s.[25] All of the teas are hand-blended at its facility in Camarillo, California.[18] The Chai Tea Latte, one of the chain's most popular drinks, was first served in 1998.[11] In March 2014, the company introduced its Tea Granita beverage in two flavors, Pear Berry and Passion Fruit.[26][27]

CBTL, a single-serve system for home use, was launched in the United States, Singapore, Malaysia, South Korea and the Philippines in 2010.[30][31] Several types of single-serve capsules are available for the machines: espresso, coffee, tea and hot chocolate.[30]

A location in Los Angeles's Fairfax district, where many Orthodox Jews reside, meets the stricter standard of Cholov Yisrael in their dairy products and pastries, and is also closed on Shabbat.[7]

All the company's locations in Singapore are halal.[33] 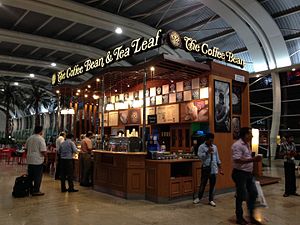 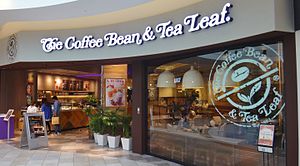 On May 28, 2013, Hilton Worldwide announced they had signed an exclusive agreement for Coffee Bean to provide in-room coffee and tea for all Hilton hotels in North America, South America, and Central America.[36]

Green Mountain Coffee Roasters announced on May 29, 2013, that they had partnered with Coffee Bean to create a K-Cup for Keurig single-cup brewing systems, available in the US as of 2014.[37]

Coffee Bean was regularly seen on the HBO television series Entourage. Most notably, in season 2, after being forced out of Terrance McQuewick's agency, Ari Gold sets up an interim agency at a West Hollywood Coffee Bean.[38][39] The franchise has also been seen on the MTV reality series The Hills.[40]

The first Coffee Bean location in Brentwood was frequented by celebrities, including Johnny Carson, Ronald Reagan, Jacques Cousteau and Lee Marvin.[5][9] The franchise's Los Angeles outlets continue to be known for being patronized by celebrities.[6][10][41]