The Courtyard of the Old Residency in Munich

The Courtyard of the Old Residency in Munich (1914) is one of the paintings by Adolf Hitler from his lesser known career as an artist. He depicts the Alter Hof,[not in citation given] a stone quad in front of a large manor.[1] During Hitler's time in Munich, he spent most of his days reading and painting; furthering his dream as an independent artist.[2] 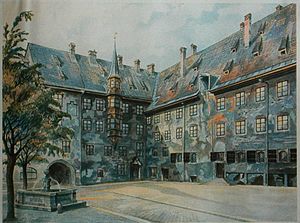 The Courtyard of the Old Residency in Munich by Adolf Hitler

Working primarily in watercolor, Hitler used the medium to express both his love of painting and architecture.[3] The painting shows his style and mastery of watercolor to create strict delineation of the building, but on the left, we see two soft standing trees to contrast the harsh lines of the house. In many of Hitler’s watercolors, scholar Charles Snyder notes the “detailed attention to humble structures surrounded by water and vegetation, [but] the architecture is of the prime importance... Note plant life, especially leaves on trees. Leaves are typically daubed and dappled in with little regard for accuracy or realism, often used to 'frame' the subject…”.[4]

Again, in the lower left, we see a small fountain between the two trees. It has been said that Hitler washed his brushes in the fountain’s waters.[citation needed]

He painted the building using grays, blues, and browns; which give the setting a cold and quiet tone. Conversely, splashes of orange and red that he dabbled on a few of the window panes and sections on the roof, show that the sun is nearly rising or setting on his new home. He even painted the shadow of the small tower stretching across the courtyard to suggest the placement of the sun.

The Courtyard of the Old Residency in Munich and a few other paintings by Hitler are archived in the basement of the Army Center of Military History in Washington, D.C., never shown to the public eye because of their controversial nature.[5]