From Infogalactic: the planetary knowledge core
Jump to: navigation, search
This article is about the Pennsylvania State University student newspaper. For the student newspaper of UMass Amherst, see The Massachusetts Daily Collegian.

The Daily Collegian is a student-operated newspaper that is published independently at the Pennsylvania State University. The newspaper is printed on weekdays during the Fall, Spring, and second Summer semesters. It is distributed for free at the University Park campus.

The mission statement of Collegian Inc. is "to publish a quality campus newspaper and to provide a rewarding educational experience for the student staff members." [2]

The student editing and reporting staff annually receives notable journalism awards. In 2010, the Collegian won the Best Newspaper Silver Crown Award from the Columbia Scholastic Press Association’s Crown/Circle Awards. Other awards were won in 2010.[3] In 2011, it was also nominated for numerous awards.[4] In 2012, The Princeton Review ranked The Daily Collegian as the #1 college newspaper in the United States.[5]

The Daily Collegian is an affiliate of UWIRE,[6] which distributes and promotes its content to their network. They contributed articles to the site from 1997-2009. 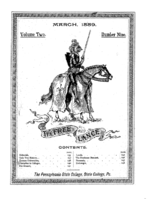 The first appearance of the Free Lance decorative cover page in 1889.

The first Penn State student newspaper was the Free Lance, published in 1887.[7] Lack of financial support from students led to its collapse in 1904, but that same year saw the foundation of a new paper, the State Collegian.[7] In 1911, its name was changed to the Penn State Collegian, and on Sept. 14, 1920, the paper began publishing on a semi-weekly basis. In 1940, the newspaper became a non-profit corporation, complete with an elected board of directors, and began publishing daily, changing its name to The Daily Collegian.[8] During World War II, the newspaper was only published weekly or semi-weekly. Following the war, in 1949, the paper won the top national award from the Associated Collegiate Press. The Digital Collegian was founded in 1996, providing online access to stories dating from 1988–present.

The paper is run by students of The Pennsylvania State University with assistance from a small professional staff.

Historical archives of The Daily Collegian, from its start as The Free Lance to its evolution into The Daily Collegian (from 1887-1987) can be found in the Historical Digital Collegian database. In the database, exact page images of the newspaper are displayed during searches, containing articles, advertisements and photographs. For those readers who prefer to see the newspaper intact, each issue can be browsed page-by-page. Thus, the Historical Digital Collegian allows researchers greater flexibility in locating articles of interest and in allowing greater access for those researchers not able to visit Penn State University Libraries.

The News and Microforms Library also has holdings of The Daily Collegian on microfilm from 1904–present.

The Daily Collegian also has articles archived on its site from 1988 to the present.

Beginning with the Fall 2006 semester, "The Digital Collegian" was renamed "The Daily Collegian Online" and debuted a new home page layout.[9] A Web department was formed with the purpose of creating online updates for breaking news and posting stories on days when classes weren’t in session.[10] The Daily Collegian Online also features a series of student-written blogs, including multiple arts and sports blogs, as well as a blog written by the paper's editor in chief.

In 2010, The Daily Collegian Online was redesigned once again, showcasing a new layout and focus. The site highlights its more active use of social media, including its acquisition of Facebook, Twitter, Foursquare and Tumblr accounts.

The Daily Collegian online is somewhat unique in that it does not rely on the College Publisher network.

The Daily Collegian is the subject of a documentary film called The Paper. The film was directed by Aaron Matthews, who used the student newspaper as a case study for the problems that face all newspapers today—flagging circulation, minority coverage, and access to sources.[11] The film made official selection at multiple festivals, including the 2007 Philadelphia Film Festival.[11]

The film was co-produced by Aaron Matthews and the Independent Television Service and had major funding from the Corporation for Public Broadcasting. Distribution for the film was carried out by Icarus Films.[12]

Released and distributed in 2007, the documentary was filmed from 2004-2005 and followed the newspaper while Editor-in-Chief James Young ran the staff.

Cinematography for the film was done by Wayne De La Roche and the music was composed by Tim Nackashi.[11]

The Birmingham Weekly called it “An insightful new documentary,” while the Boston Globe stated, "What we see at the Collegian is a resonant microcosm: This paper's crucible is every paper's." [12]

The Daily Collegian is often considered one of the top student-run college newspapers in the nation. In 2010, the Princeton Review named the Daily Collegian the sixth best college paper in the United States.[14]

In 2012, The Princeton Review ranked The Daily Collegian as the #1 college newspaper in the United States.[5] Many staff members and editors receive state and national awards in journalism for their work. Collegian alumni work at prestigious organizations such as The New York Times, The Los Angeles Times, The Wall Street Journal, USA Today, Esquire (magazine), CNN and NPR.[15][16]

The newspaper covers everything from local news and sports to state, national and international events. The Daily Collegian is published weekdays during the fall, spring and second summer session semesters at Penn State while classes are in session, and distributed on the University Park campus.

Tuesdays feature a full page of arts reviews called Arts in Review (it was featured on Fridays until it was switched in 2010).

In 2007 the Collegian introduced the "Special Section," a single page dedicated to a different topic (Health and Fitness, Business, Sex and Dating, Technology and Travel) every Tuesday. Currently, the Special Section is no longer published as Arts in Review has moved into its slot.

Published Wednesdays while classes are in session, the Weekly Collegian is distributed on Commonwealth Campuses and mailed to subscribers. The Weekly Collegian, launched on Sept. 12, 1979, is a compilation of the top stories from the daily papers each week. Only one issue of the Weekly is published during the summer: a fall sports preview. The fall sports issue uses a tabloid format, and is sometimes mistaken as an issue of Collegian Magazine. The publication, which is heavy on sports coverage, also targets parents of current students, alumni, sports fans and anyone interested in Penn State news.

Published Thursdays and included as a tabloid insert inside of The Daily Collegian, Venues magazine originally contained bar listings, movie times and stories about the State College arts scene. Venues was redesigned in the Fall 2007 semester, adopting a more youthful look and shifting its focus from long previews to a more feature-heavy format. In 2013, the insert was again redesigned and renamed P.S. The Collegian also distributes standalone copies of Venues on Fridays on the University Park campus and downtown State College.

Established in 1980, Collegian Magazine is a feature magazine for special events and special topics, bridging publication gaps created by Penn State's semester schedule. The name was originally adopted to provide a unifying identity for a number of tabloid-size special sections that were being published from time to time. Along with the name, a publication schedule and a common format were adopted. More issues were added as time progressed.

Typically, 13 issues are published each year. All but two are free-standing publications. Two are inserted in The Daily Collegian with additional free-standing circulation. Many issues target audiences other than current students on the University Park campus. Additional issues and one-time issues can be added to the magazine schedule. For example, a special issue was published following a Penn State football victory in a post-season bowl game.

Currently, the regular issues are:

-Summer 101: Usually running sometime in May, this issue remains on display during the start of the first six-week summer session, when The Daily Collegian is not publishing daily.
-Arts Festival: This issue is printed in July during the Central Pennsylvania Festival of the Arts.
-Fall 101: Published at the start of the fall semester in August, Fall 101 targets incoming students.
-Stadium Magazine: This magazine is distributed at Beaver Stadium during each home football game.
-Blue-White: This magazine is published during Blue-White Weekend in April, with extra distribution at Beaver Stadium for the Blue-White Game, which is the annual spring football scrimmage.
-Finals Magazine: This issue is published the Monday of final’s week during Fall and Spring semesters.
-Thaw: A spring break tie-in, this issue includes stories reflecting the changing seasons. This has replaced the "Living" magazine, which was originally created to aid students in finding living arrangements for the next year.

All print issues of the Collegian are also published online at in addition to local online updates during the day and weekends, as well as extended coverage beyond the articles in print.

In 1993, the paper criticized the Society for Professional Journalists after that organization offered a $250 reward for information on the persons who stole half a conservative campus newspaper's run, burning part of it. The Collegian said the thieves were engaging in constitutionally protected speech.[17]