The Dallas Morning News is a major daily newspaper serving the Dallas, Texas area, with over 400,000 daily subscribers. It was founded on October 1, 1885, by Alfred Horatio Belo as a satellite publication of the Galveston Daily News, of Galveston, Texas.[2][3][4]

Today it has one of the 20 largest paid circulations in the United States.[5] Throughout the 1990s and as recently as 2010, the paper has won numerous Pulitzer Prizes for reporting and photography, George Polk Awards for education reporting and regional reporting, and an Overseas Press Club award for photography. The company has its headquarters in Downtown Dallas.[6] 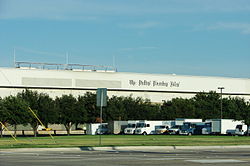 The Dallas Morning News was founded in 1885 as a spin-off of the Galveston Daily News by Alfred Horatio Belo. In 1926, the Belo family sold a majority interest in the paper to its longtime publisher, George Dealey.

In late 1991, The Dallas Morning News became the lone major newspaper in the Dallas market when the Dallas Times Herald was closed after several years of circulation wars between the two papers, especially over the then-burgeoning classified advertising market. In July 1986, the Times Herald was purchased by William Dean Singleton, owner of MediaNews Group. After 18 months of efforts to turn the paper around, Singleton sold it to an associate. On 8 December 1991, Belo bought the Times Herald for $55 million, closing the paper the next day.

It was not the first time the Belo family had bought (and closed) a paper named The Herald in Dallas.

[In]...1879 Alfred H. Belo was investigating the possibility of establishing a sister paper in rapidly developing North Texas. When Belo's efforts to purchase the Herald [an extant paper in Dallas] failed, he sent George Bannerman Dealey to launch a new paper, the Morning News, which began publication on October 1, 1885. From the outset the Morning News enjoyed the double advantage of strong financial support and an accumulation of journalistic experience, and within a month and a half had absorbed its older rival.[7][8]