The Dark Knight Returns (alternatively titled Batman: The Dark Knight Returns) is a 1986 four-issue comic book miniseries starring Batman, written by Frank Miller, illustrated by Miller and Klaus Janson, and published by DC Comics. When the series was collected into a single volume later that year, the story title for the first issue was applied to the entire series. The Dark Knight Returns tells an alternative story of Bruce Wayne, who at 55 years old returns from retirement to fight crime and faces opposition from the Gotham City police force and the United States government. The story introduces Carrie Kelley as the new Robin and culminates with a confrontation against Superman.

A three-issue sequel written and illustrated by Miller, The Dark Knight Strikes Again, was published in 2001. An eight-issue third installment, The Dark Knight III: The Master Race, co-written by Miller and Brian Azzarello, was announced in April 2015 and is scheduled for a twice-monthly fall 2015 release.[1] In addition, a 64-page prestige format one-shot co-written by Miller and Azzarello, Dark Knight Returns: The Last Crusade, which serves as a prequel to the first series, will be released on February 17, 2016.[2]

In the pre-Flashpoint DC Multiverse, the events of The Dark Knight Returns and its associated titles were designated to occur on Earth-31.

The Dark Knight Returns is set in a dystopian near-future version of Gotham City. Bruce Wayne, at 55, has retired from crime-fighting for ten years. Levels of crime are rising. Wayne has a breakthrough and finds retirement is against his instincts and becomes Batman again. He first confronts Harvey Dent, who was thought to be cured after plastic surgery (which Wayne financed). Dent holds the city for ransom with a bomb. When Batman defeats Dent, he realizes that, despite his repaired appearance, Dent's mind is now entirely "Two-Face".

Batman saves 13-year-old Carrie Kelley from an attack by a gang called the Mutants. Kelley buys herself an imitation Robin costume and searches for Batman, seeking to help him. She finds Batman at the city dump, where he fights an army of Mutants. Though Batman defeats the Mutant army with his weaponry, the Mutant leader beats him in combat. Kelley creates a diversion and helps Batman escape. With the help of retiring Commissioner James Gordon and the new Robin, Batman defeats the Mutant leader on his own terms. The Mutants disband and some rename themselves the Sons of Batman, using excessive violence against criminals.

At the White House, Superman and the president discuss the events in Gotham, with the latter suggesting that the Man of Steel may soon have to rein in the Dark Knight. Superman is then deployed by Washington to the Latin American country of Corto Maltese where he fights Soviet combat forces in a conflict that may ignite WWIII.

Batman's return stimulates The Joker to awaken from catatonia at Arkham Asylum. With renewed purpose, The Joker manipulates his caretakers to allow him onto a television talk show, where he murders everyone with gas and escapes. Batman and Robin track him to a county fair, where he is already killing people. Batman defeats The Joker in a violent confrontation, nearly killing him. To incriminate Batman for murder, The Joker commits suicide by breaking his own neck. After another confrontation with the Gotham police, Batman escapes, and a citywide manhunt begins.

Superman diverts a Soviet nuclear warhead which detonates in a desert. The United States is hit by an electromagnetic pulse, and descends into chaos during the resulting blackout. In Gotham, Batman realizes what has happened, and he and Robin turn the remaining Mutants and Sons of the Batman into a non-lethal fighting force. He leads them against looters and ensures the flow of essential supplies. In the midst of nuclear winter, Gotham becomes the safest city in the country. The U.S. government sees this as an embarrassment, and orders Superman to remove Batman. Oliver Queen (the former Green Arrow) predicts to Wayne that the government lackey Superman and the maverick Batman will have a final confrontation. Superman demands to meet Batman. Knowing he may die, Wayne chooses Crime Alley, where he first became Batman. He relies on Superman's weakness caused by near-death in the nuclear blast.

Superman tries to reason with Batman, but Batman uses his technological inventions and mastery of hand-to-hand combat to fight him. During the battle, Superman compromises Batman's exoframe, while Queen shoots a kryptonite-tipped arrow to greatly weaken Superman. Batman reveals that he intentionally spared Superman's life by not using a more powerful kyrptonite mix; the fight and near-death experience was meant as a warning to Superman to stay out of Batman's way. Before he can finish his monologue, Batman suddenly has a heart attack, apparently dying. Alfred Pennyworth destroys the Batcave and Wayne Manor, dying of a stroke, exposing Batman as Bruce Wayne, whose fortune has disappeared. After Wayne's funeral, it is revealed that his death was staged using his own chemical concoction that can suspend his vital life signs. Clark Kent attends the funeral and winks at Robin after hearing Wayne's heartbeat resume. Some time afterward, Bruce Wayne leads Robin, Queen, and the rest of his followers into the caverns beyond the Batcave and prepares to continue his war on crime. With them by his side, Wayne plans to assemble an army and allies to bring order back to the world. 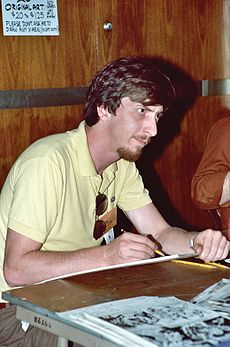 In the early 1980s, DC Comics promoted Batman group editor Dick Giordano to editorial director for the company.[3] Writer-artist Frank Miller was recruited to create The Dark Knight Returns. Giordano said he worked with Miller on the story's plot, and said, "[t]he version that was finally done was about his fourth or fifth draft. The basic storyline was the same but there were a lot of detours along the way."[4] During the creation of the series, fellow comics writer/artist John Byrne told Miller, "Robin must be a girl", and Miller complied.[5] Miller said that the comic series' plot was inspired by Dirty Harry, specifically the 1983 film Sudden Impact, in which Dirty Harry returns to crime-fighting after a lengthy convalescence. Miller also said his own increasing age was a factor in the plot.[6] The series employed a 16-panel grid for its pages. Each page was composed of either a combination of either 16 panels, or anywhere between sixteen and one panel per page.[7] Giordano left the project halfway through because of disagreements over production deadlines. Comics historian Les Daniels wrote that Miller's idea of ignoring deadlines was "the culmination of the quest towards artistic independence".[6]

The issues of The Dark Knight Returns were presented in packaging that included extra pages, square binding and glossy paper to highlight the watercolor paintings by colorist Lynn Varley.[8]

Despite the cost of the single-issue packaging, The Dark Knight Returns sold well.[8] Priced at $2.95 an issue, DC Comics promoted The Dark Knight Returns as a "thought-provoking action story". Time said the series' depiction of a "semi-retired Batman [who] is unsure about his crime-fighting abilities" was an example of trying to appeal to "today's skeptical readers".[9]

IGN Comics ranked The Dark Knight Returns first on a list of the 25 greatest Batman graphic novels and called The Dark Knight Returns "a true masterpiece of storytelling" with "[s]cene after unforgettable scene."[10] In 2005, Time chose the collected edition as one of the 10 best English language graphic novels ever written.[11] Forbidden Planet placed the collected issue at number one on its "50 Best of the Best Graphic Novels" list.[12] Writer Matthew K. Manning in the "1980s" chapter of DC Comics Year By Year A Visual Chronicle (2010) called the series "arguably the best Batman story of all time."[13] It was placed second in a poll among comic book academics conducted by the Sequart Organization.[14]

The series also garnered some negative reviews. In April 2010, Nicolas Slayton from Comics Bulletin ranked The Dark Knight Returns second in his Tuesday Top Ten feature's Top 10 Overrated Comic Books behind Watchmen. Slayton wrote, "[t]here is no central plot to the comic, leaving only a forced fight scene between Superman and Batman as an out of place climax to the story." "Gone are the traits that define Batman," also citing "misuse of the central character."[15] The New York Times gave the 1987 collected release of the series a negative review. Mordecai Richler felt that The Dark Knight Returns was not as imaginative as the work of Batman creator Bob Kane. Richler commented, "The stories are convoluted, difficult to follow and crammed with far too much text. The drawings offer a grotesquely muscle-bound Batman and Superman, not the lovable champions of old." He concluded, "If this book is meant for kids, I doubt that they will be pleased. If it is aimed at adults, they are not the sort I want to drink with."[16]

The immense popularity of The Dark Knight Returns served both to return the character of Batman to a central role in pop culture, but also (along with Watchmen) started the era known as the Dark Age of Comic Books (also known as the Modern Age and the Iron Age). The grim, seedy versions of Gotham and Batman successfully updated the character's identity from the campy Adam West version remembered from the 1960s Batman TV series, and proved critically and commercially successful enough that a new wave of 'dark' superheroes were either created, repopularized, or revamped altogether to fit this new trend.

The Dark Knight Returns was one of the two comic books, alongside Watchmen, that inspired designer Vincent Connare when he created the Comic Sans font.[17]

The story became an influence for various Batman-based media including the films The Dark Knight Rises (2012) and Batman v Superman: Dawn of Justice (2016), and was adapted into a two-part animated film.

In 1996, to commemorate the 10th anniversary of the graphic novel, DC released a new hardcover and a later softcover release. These included original rough script text for issue #4 with some sketches by Miller. There was also a limited edition slip cased hardcover that had mini poster prints, separate media review and sketch book by Miller. DC Direct released a limited edition statue of Batman and Robin designed by Miller. It was released in full size and then later as a mini sized statue.[27][unreliable source?] DC Direct released a series of Batman action figures based on The Dark Knight Returns in 2004. It included figures of Batman, Robin, Superman, and The Joker. Later, a Batman and Joker Gift Set was released, including both characters with new color schemes to reflect earlier points in the story, and a 48-page prestige format reprint of The Dark Knight Returns #1 was also released.[citation needed] An action figure of Batman as he appears in The Dark Knight Returns was released by Mattel in 2013, as part of their Batman Unlimited line of action figures.[citation needed]