From Infogalactic: the planetary knowledge core
Jump to: navigation, search
This article is about the story by Hans Christian Andersen. For other uses, see The Emperor's New Clothes (disambiguation).
Not to be confused with The Emperor Wears No Clothes.

"The Emperor's New Clothes" (Danish: Kejserens nye Klæder) is a short tale by Hans Christian Andersen about two weavers who promise an emperor a new suit of clothes that is invisible to those who are unfit for their positions, stupid, or incompetent. When the Emperor parades before his subjects in his new clothes, no one dares to say that he doesn't see any suit of clothes until a child cries out, "But he isn't wearing anything at all!" The tale has been translated into over a hundred languages.[1]

"The Emperor’s New Clothes" was first published with "The Little Mermaid" in Copenhagen by C. A. Reitzel on 7 April 1837 as the third and final installment of Andersen's Fairy Tales Told for Children. The tale has been adapted to various media, including the musical stage and animated film.

A vain Emperor who cares about nothing except wearing and displaying clothes hires two weavers who promise him the finest, best suit of clothes from a fabric invisible to anyone who is unfit for his position or "hopelessly stupid". The Emperor's ministers cannot see the clothes themselves, but pretend that they can for fear of appearing unfit for their positions and the Emperor does the same. Finally the weavers report that the suit is finished, they mime dressing him and the Emperor marches in procession before his subjects. The townsfolk play along with the pretense, not wanting to appear unfit for their positions or stupid. Then a child in the crowd, too young to understand the desirability of keeping up the pretense, blurts out that the Emperor is wearing nothing at all and the cry is taken up by others. The Emperor suspects the assertion is true, but continues the procession.

Andersen's tale is based on a story from the Libro de los ejemplos (or El Conde Lucanor, 1335),[2] a medieval Spanish collection of fifty-one cautionary tales with various sources such as Aesop and other classical writers and Persian folktales, by Juan Manuel, Prince of Villena (1282–1348). Andersen did not know the Spanish original but read the tale in a German translation titled "So ist der Lauf der Welt".[3] In the source tale, a king is hoodwinked by weavers who claim to make a suit of clothes invisible to any man not the son of his presumed father; whereas Andersen altered the source tale to direct the focus on courtly pride and intellectual vanity rather than adulterous paternity.[4][5] 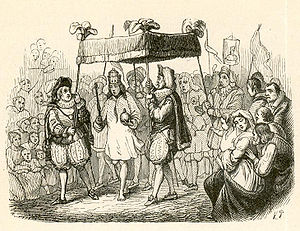 Andersen's manuscript was at the printer's when he was suddenly inspired to change the original climax of the tale from the emperor's subjects admiring his invisible clothes to that of the child's cry.[6] There are many theories about why he made this change. Most scholars agree that from his earliest years in Copenhagen, Andersen presented himself to the Danish bourgeoisie as the naïvely precocious child not usually admitted to the adult salon. "The Emperor's New Clothes" became his expose of the hypocrisy and snobbery he found there when he finally gained admission.[7]

Andersen's decision to change the ending may have occurred after he read the manuscript tale to a child,[8] or had its source in a childhood incident similar to that in the tale. He later recalled standing in a crowd with his mother waiting to see King Frederick VI. When the king made his appearance, Andersen cried out, "Oh, he's nothing more than a human being!" His mother tried to silence him by crying, "Have you gone mad, child?". Whatever the reason, Andersen thought the change would prove more satirical.[9] 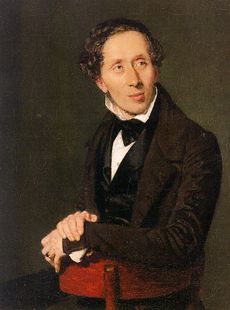 "The Emperor's New Clothes" was first published with "The Little Mermaid" on 7 April 1837 by C.A. Reitzel in Copenhagen as the third and final installment of the first collection of Andersen's Fairy Tales Told for Children. The first two booklets of the collection were published in May and December 1835 and met with little critical enthusiasm.[10] Andersen waited a year before publishing the third installment of the collection.[11]

Traditional Danish tales as well as German and French folktales were regarded as a form of exotica in nineteenth century Denmark and were read aloud to select gatherings by celebrated actors of the day. Andersen's tales eventually became a part of the repertoire and readings of "The Emperor's New Clothes" became a specialty of and a big hit for the popular Danish actor Ludvig Phister.[12]

On 1 July 1844, the Hereditary Grand Duke Carl Alexander held a literary soiree at Ettersburg in honor of Andersen. Tired by speaking various foreign languages and on the verge of vomiting after days of feasting, the author managed to control his body and read aloud "The Princess and the Pea", "Little Ida's Flowers", and "The Emperor's New Clothes".[13]

Jack Zipes, in Hans Christian Andersen: The Misunderstood Storyteller, suggests that seeing is presented in the tale as the courage of one's convictions; Zipes believe this is the reason the story is popular with children. Sight becomes insight, which, in turn, prompts action.[14]

Alison Prince, author of Hans Christian Andersen: The Fan Dancer, claims that Andersen received a gift of a ruby and diamond ring from the king after publications of "The Emperor's New Clothes" and "The Swineherd"—tales in which Andersen voices a satirical disrespect for the court. Prince suggests the ring was an attempt to curb Andersen's sudden bent for political satire by bringing him into the royal fold. She points out that after The Swineherd, he never again wrote a tale colored with political satire, but, within months of the gift, began composing "The Ugly Duckling", a tale about a bird born in a henyard who, after a lifetime of misery, matures into a swan, "one of those royal birds".[15] In Hans Christian Andersen: The Life of a Storyteller, biographer Jackie Wullschlager points out that Andersen was not only a successful adapter of existing lore and literary material such as the Spanish source tale for "The Emperor's New Clothes" but also equally competent at creating new material that entered the human collective consciousness with the same mythic power as ancient, anonymous lore.[16]

Hollis Robbins, in "The Emperor's New Critique" (2003),[17] argues that the tale is itself so transparent "that there has been little need for critical scrutiny."[18] Robbins argues that Andersen's tale "quite clearly rehearses four contemporary controversies: the institution of a meritocratic civil service, the valuation of labor, the expansion of democratic power, and the appraisal of art".[19] Robbins concludes that the story's appeal lies in its "seductive resolution" of the conflict by the truth-telling boy.

In The Annotated Hans Christian Andersen (2008), folk and fairy tale researcher Maria Tatar offers a scholarly investigation and analysis of the story, drawing on Robbins' political and sociological analysis of the tale. Tatar points out that Robbins indicates the swindling weavers are simply insisting that "the value of their labor be recognized apart from its material embodiment", and notes that Robbins considers the ability of some in the tale to see the invisible cloth as "a successful enchantment".[20]

Tatar observes that "The Emperor's New Clothes" is one of Andersen's best known tales and one that has acquired an iconic status globally as it migrates across various cultures reshaping itself with each retelling in the manner of oral folktales.[21] Scholars have noted that the phrase 'Emperor's new clothes' has become a standard metaphor for anything that smacks of pretentiousness, pomposity, social hypocrisy, collective denial, or hollow ostentatiousness. Historically, the tale established Andersen's reputation as a children's author whose stories actually imparted lessons of value for his juvenile audience, and "romanticized" children by "investing them with the courage to challenge authority and to speak truth to power."[22] With each successive description of the swindlers' wonderful cloth, it becomes more substantial, more palpable, and a thing of imaginative beauty for the reader even though it has no material existence. Its beauty however is obscured at the end of the tale with the obligatory moral message for children. Tatar is left wondering if the real value of the tale is the creation of the wonderful fabric in the reader's imagination or the tale's closing message of speaking truth no matter how humiliating to the recipient.

Naomi Wood of Kansas State University challenges Robbins' reading, arguing that before the World Trade Center attacks of 2001, "Robbins's argument might seem merely playful, anti-intuitive, and provocative."[23] Wood concludes: "Perhaps the truth of 'The Emperor's New Clothes' is not that the child's truth is mercifully free of adult corruption, but that it recognizes the terrifying possibility that whatever words we may use to clothe our fears, the fabric cannot protect us from them."[24] 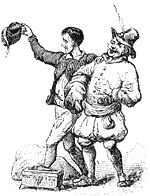 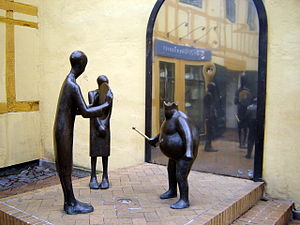 Various adaptations of the tale have appeared since its first publication, including a 1919 Russian film directed by Yuri Zhelyabuzhsky, a 1987 musical starring Sid Caesar, and numerous short stories, plays, spoofs, and animated films.[1]

In 1972, Rankin/Bass Productions adapted the tale as the first and only musical episode of the series "The Enchanted World of Danny Kaye" for the ABC network, featuring Danny Kaye, Cyril Ritchard, Imogene Coca, Allen Swift and Bob McFadden. The television special features eight songs with music by Maury Laws and lyrics by Jules Bass, and combines live action filmed in Aarhus, Denmark, animation, special effects and the stop motion animation process "Animagic" made in Japan.

In 1985, Jack Herer published the first edition of "The Emperor Wears No Clothes". This book uncovers the history of industrial hemp through civilization, culminating to a propaganda campaign in the U.S. in the early 20th century. The book is now in its 11th edition.

The 1987 Japanese war documentary film The Emperor's Naked Army Marches On, by director Kazuo Hara, centers on 62-year-old Kenzo Okuzaki, veteran of Japan's Second World War campaign in New Guinea, and follows him around as he searches out those responsible for the unexplained deaths of two soldiers in his old unit.

Use as an idiom