From Infogalactic: the planetary knowledge core
(Redirected from The English Dancing Master)
Jump to: navigation, search 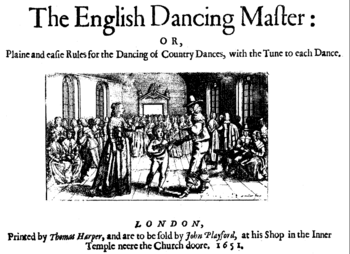 Title page of the 1st edition of The Dancing Master (1651)

The Dancing Master (first edition: The English Dancing Master) is a dancing manual containing the music and instructions for English Country Dances. It was published in several editions by John Playford and his successors from 1651 until c1728. The first edition contained 105 dances with single line melodies; subsequent editions introduced new songs and dances, while dropping others, and the work eventually encompassed three volumes. Dances from The Dancing Master were re-published in arrangements by Cecil Sharp in the early 20th century, and in these reconstructed forms remain popular among dancers today.