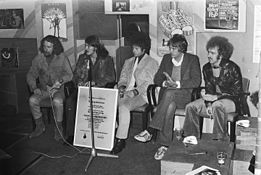 The Flying Burrito Brothers was an American country rock band, best known for their influential 1969 debut album, The Gilded Palace of Sin.[1] Although the group is perhaps best known for its connection to band founders Gram Parsons and Chris Hillman, the group underwent many personnel changes and has existed in various incarnations to the present day[when?].

Original lineup and members until 1972

The Flying Burrito Brothers were founded in 1968 on the West Coast of the United States by former Byrds members Gram Parsons and Chris Hillman,[2] with pianist and bassist Chris Ethridge and pedal steel guitarist Sneaky Pete Kleinow. The group borrowed their name from an East Coast–based group of the same name who had been colleagues of Parsons's first band, the International Submarine Band, but had never recorded. Though Hillman and Roger McGuinn had fired Parsons from the Byrds in July 1968, Hillman and Parsons reconciled later that year after Hillman himself left the Byrds. Parsons had refused to join his Byrds bandmates for a tour of South Africa, citing his disapproval of the apartheid policy of that nation's government. Hillman doubted the sincerity of Parsons's gesture, believing instead that the singer merely wanted to remain in England with Mick Jagger and Keith Richards of the Rolling Stones, whom he had recently befriended.[3]

The Flying Burrito Brothers recorded their debut album, The Gilded Palace of Sin, without a regular drummer, although "Fast" Eddie Hoh and Jon Corneal both appear on the album. The album contains originals by Parsons and Hillman and covers of two songs by soul music writers Dan Penn and Chips Moman. After firing Corneal, the band needed a permanent drummer for touring purposes; they hired another ex-Byrd, Michael Clarke, who had recently been working with the Dillard and Clark Expedition. Clarke remained the band's permanent drummer from 1969 to 1973.

Although critically well received, The Gilded Palace of Sin did not sell well.[4] The band had been invited to perform at the August 1969 Woodstock festival but declined, instead electing to embark on a train tour of the United States, which ultimately ended in disaster due to drug and alcohol use.[5] Bassist Ethridge soon departed the group, with Hillman moving to bass, and the band hired singer and guitarist Bernie Leadon. The band performed at the ill-fated Altamont Free Concert in December 1969, and, as documented in the film Gimme Shelter, the crowd remained largely peaceful throughout their performance.

Parsons, the band's de facto leader and creative principal, was fired from the group in May 1970, shortly after the release of the second album, Burrito Deluxe.[6] According to Hillman, Parsons showed up for a band performance only minutes before they were to take the stage. Visibly intoxicated, he began singing songs which differed from what the rest of the band were performing. A furious Hillman fired him immediately after the show, to which Parsons responded, "You can't fire me, I'm Gram!". This incident was merely the final straw, according to Hillman. Parsons's desire to hang out with the Rolling Stones rather than focus on his own band's career was also a significant factor, mirroring his 1968 dismissal from the Byrds.[5]

A third album featuring Parsons was recorded in 1970 but never released in its entirety. Several of the tracks from these sessions eventually saw the light of day in 1976 on the album Sleepless Nights. These tracks were intended for a traditional country album and featured country standards such as "Green, Green Grass of Home" and "Tonight the Bottle Let Me Down".[7]

A version of the group without Parsons appeared in June–July 1970 on the Festival Express tour of Canada, documented in the film of the same name. Parsons was later replaced by Rick Roberts, with the new lineup releasing the album The Flying Burrito Bros in 1971. Kleinow then left to become a session musician, and Leadon departed to create the Eagles.[8] Al Perkins and Kenny Wertz replaced them, and Roger Bush and Byron Berline participated as guests in live performances. The band released a live album, Last of the Red Hot Burritos, in 1972.

The original band dissolved after the last founding member, Chris Hillman, took Perkins with him to join Manassas. Berline, Bush and Wertz continued with their own band, Country Gazette. Roberts assembled a makeshift Flying Burrito Bros group to fulfill contractual commitments for some 1973 European live shows, then initiated a solo career before forming Firefall with Michael Clarke.

As Parsons's influence and fame grew, so did interest in the Flying Burrito Brothers. This new-found popularity led to the release of Close Up the Honky Tonks in 1974, a double-LP compilation of album tracks, B-sides, and outtakes. Soon after, in 1975, Kleinow and Ethridge put together a new incarnation of the band. Parsons, when asked in 1972 about the band continuing without him, remarked, "The idea'll keep going on. It's not like it's dead or anything. Whether I do it or anybody else does it, it's got to keep going."[9] Floyd "Gib" Gilbeau, Joel Scott Hill, and Gene Parsons (no relation to Gram) also joined the group, and the band released Flying Again that year. Ethridge was then replaced by Skip Battin for the 1976 album Airborne. The lineup continued to evolve for the rest of the 1970s, with the band even releasing an album under the name Sierra while continuing to play shows as the Flying Burrito Brothers. In 1980, they had a country hit with a version of Merle Haggard's "White Line Fever" from their album Live in Tokyo, released the previous year.

The early 1980s were a period of commercial success for the band, and during this time the band became known as simply "The Burrito Brothers." Headed by songwriter and guitarist John Beland, Gib Guilbeau, and initially Kleinow, the Burrito Brothers scored well on the country charts. Skip Battin had remained with the band 8until this point but left shortly before the release of Hearts on the Line in 1981. This marked the first significant commercial chart success the band ever had. In 1981 they received the Billboard award for "Best New Crossover Group" from pop to country. The Burrito Brothers continued to work with the top session players in Nashville and Los Angeles, logging an impressive list of hit singles for Curb Records. In the 1980s they toured Europe, were featured at the Albi Nashville Festival in Albi, France, and performed with Emmylou Harris, Jerry Lee Lewis, and Tammy Wynette at London's Wembley Stadium. Also in the early 1980s, the Burrito Brothers were responsible for a campaign that finally saw their idol, Lefty Frizzell, inducted into the Country Music Hall of Fame. In 1982, Kleinow, the sole original member, departed prior to the release of Sunset Sundown. In 1984, Beland and Guilbeau retired the Burritos and afforded Kleinow the chance to re-form essentially the late 1970s lineup with Skip Battin and Greg Harris, which continued to tour and release live albums for the rest of the 1980s.

In 1991 a lineup consisting of Beland, Guilbeau, Ethridge, Kleinow, and Australian singer Brian Cadd began work on a new album, Eye of a Hurricane. The band went without a regular drummer and used session drummer Ron Tutt, who had previously played with Elvis Presley. The band soon parted ways with Ethridge (for the third time) and Cadd. Ethridge was replaced by Larry Patton, and Gary Kubal was added as a full-time drummer. This lineup released California Jukebox in 1997. At this time Gib Guilbeau and Kleinow stopped working with the group because of health concerns. Kleinow was replaced by Wayne Bridge. In 1999, the band released Sons of the Golden West, which, while receiving solid critical reviews, would prove to be the final album by the Flying Burrito Brothers, as John Beland decided to end the band shortly after the turn of the millennium.

Kleinow then created a new Burrito project in 2002. This band was called Burrito Deluxe, because John Beland still having rights to the original name. This band featured Carlton Moody on lead vocals and Garth Hudson from the Band on keyboards. The first album of this incarnation, Georgia Peach, was conceived as a tribute to Gram Parsons. Kleinow left the band because of illness in 2005, leaving no direct lineage to any of the original 1969–1972 lineup. His final recordings appear on their 2007 album Disciples of the Truth. In 2010, an English record label owner, Del Taylor, attempted to reactivate the band with any previous members he could find. Bernie Leadon, Chris Ethridge, Al Perkins, and Gene Parsons all agreed if Chris Hillman would join. Hillman was not interested in the project and instead took steps to acquire the rights to the name "The Flying Burrito Brothers" so that he could retire the band once and for all. His efforts were in vain, however. As recently as 2011, a still further evolution of the band, led by Walter Egan from Burrito Deluxe, released the album Sound as Ever under the name "The Burritos". Beginning in 2012, that band began playing shows under the name "The Burrito Brothers".[10]

Hillman remained a successful singer-songwriter, having been part of the Souther-Hillman-Furay Band and McGuinn-Clark-Hillman, then going on to form the Desert Rose Band (1986–93) with Herb Pedersen. He continued to sing with Pedersen as Chris and Herb, releasing The Other Side in 2005.

Guilbeau retired following heart surgery and moved to Palmdale, California. He continued to appear occasionally at local functions in and around the Los Angeles area. Beland continued to produce acts in the U.S. and abroad, achieving hit records in both Australia and Norway, where he also performed as a solo act. Beland moved to Brenham, Texas, and has written hits for performers such as the Whites ("Forever You"), Mark Farner ("Isn't It Amazing?"), and the Bellamy Brothers ("Cowboy Beat", "Hard Way to Make an Easy Living", and "Bound to Explode"). His songs have been covered by many acts, from Ricky Nelson to Garth Brooks.

A Mexican restaurant in Gainesville, Florida, was named after the band.[11]

A Mexican restaurant, "The Flying Burrito", operated in Greenville, Ohio, from 1975 through 1993.

A chain of Mexican restaurants in New Zealand was also named after the band.

The role-playing game Kingdom of Loathing has a character named after the band.[12] 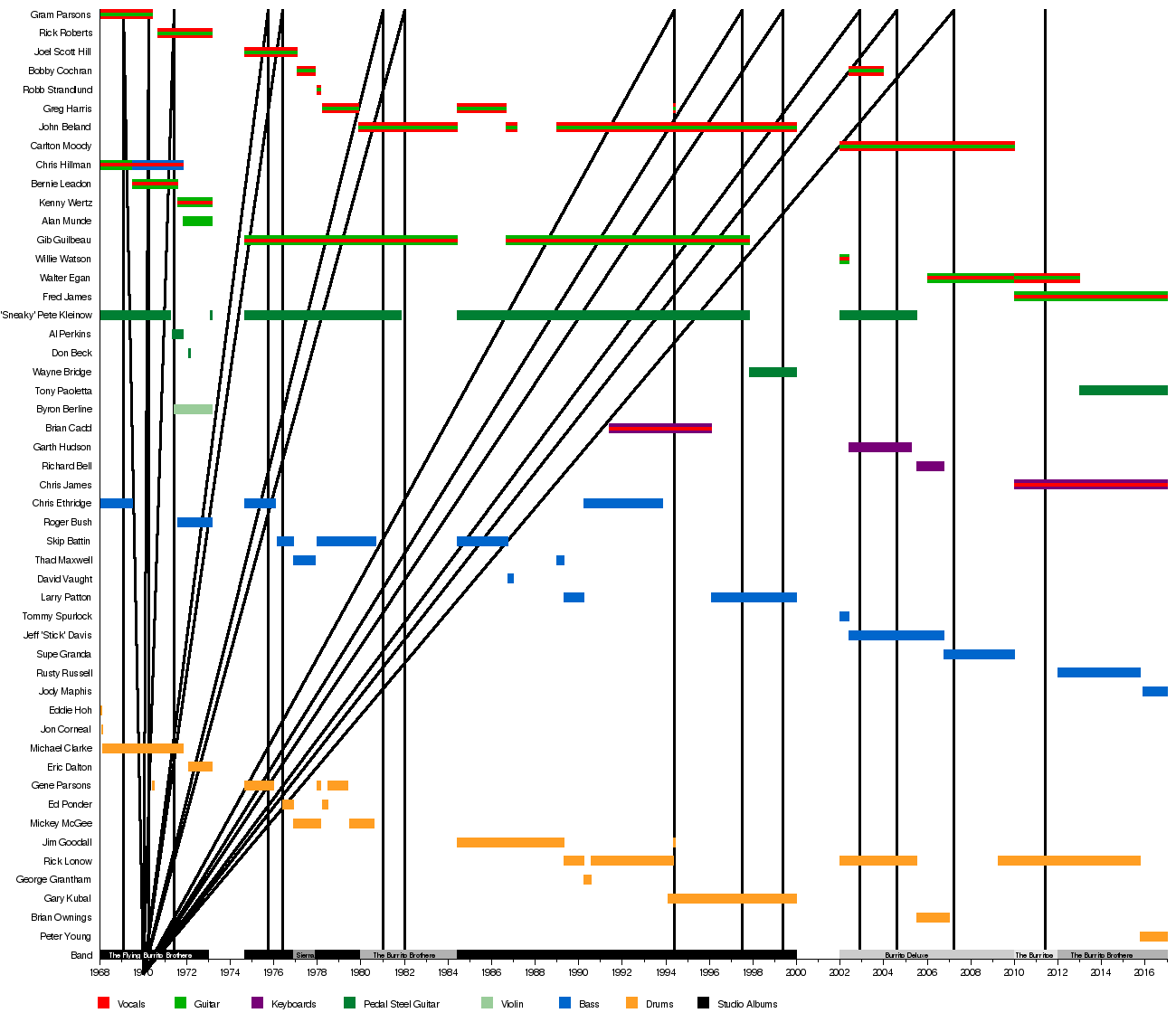