From Infogalactic: the planetary knowledge core
(Redirected from The Gates (installation))
Jump to: navigation, search
For other uses, see Gates. 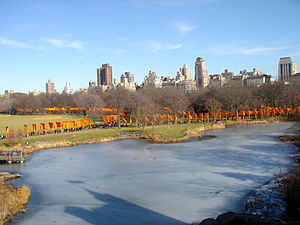 The Gates were a group of gates comprising a site-specific work of art by Bulgarian artist Christo Yavacheff and French artist Jeanne-Claude, known jointly as Christo and Jeanne-Claude. The artists installed 7,503 vinyl "gates" along 23 miles (37 km) of pathways in Central Park in New York City. From each gate hung a panel of deep saffron-colored nylon fabric. The exhibit ran from February 12, 2005 through February 27, 2005.

The books and other memorabilia distributed by Christo and Jeanne-Claude refer to the project as The Gates, Central Park, New York, 1979–2005 in reference to the time that passed from the artists' initial proposal until they were able to go ahead with it.

The Gates were greeted with mixed reactions. Some people loved them for brightening the bleak winter landscape and encouraging late-night pedestrian traffic in Central Park; others hated them, accusing them of defacing the landscape. It was seen as an obstruction to bicyclists, who felt that the gates could cause accidents, although cycling was not legal on those paths. The artists received a great deal of their nationwide fame as a frequent object of ridicule by David Letterman, as well as by Keith Olbermann, whose apartment was nearby.

As one of the conditions for use of the park space, the steel bases rested upon, but remained unattached to, the walkways, so that no holes were drilled and no permanent changes were made to the park.

The artists sold pieces of their own artwork, including preparatory drawings for The Gates, to finance the project.

They offered a cost of $21 million and the details are published in the Harvard Business School. Greg Allen and The New York Times attempted to itemize the costs and could account for about $5–10 million, given reasonable estimates for parts, labor, and costs related to the staffing of the installation.[1][2]

File:Gates base.jpg
During construction: one of the many metal base parts (Feb. 6)

On January 3, 2005, work began on the installation of the project. During the week of January 17, the park filled with workers using forklift vehicles to move the rectangular steel plates into position all over Central Park. There were small signs placed on every walkway in the park with alphanumeric codes which the workers used to place the metal plates onto the designated spots.

By January 27, most of the rectangular metal plates were positioned. All had small orange plastic markers sticking up two feet (around half a meter) from each end, possibly intended to help people find the base plates if they were covered with snow. A major snow storm on January 22 and extreme cold hampered progress.

File:Gates parts.jpg
Hardware used to ensure that the vertical pieces were parallel, even when the base plates themselves were not level, due to uneven or sloped ground.

By February 7, many teams of workers, wearing grey uniforms, moved the vertical parts of the gates, and attached them to the base plates. The documentation describes the color as saffron but many local observers described it as orange. The attached vertical fabric pieces were 16 feet (5 m) high, with a crossbar at the top from which the flag pieces were unfurled. The most common width seems to have been 11 feet (3 m) although the width varied, depending on the width of the path, from 5 feet 6 inches to 18 feet.

The project was officially launched on February 12, 2005, when then-New York Mayor Michael R. Bloomberg dropped the first piece of fabric at 8:30 a.m., with Christo and Jeanne-Claude in attendance. The rest of The Gates were opened subsequently throughout the park and were completed within the next few hours with large crowds of people watching. Generally, the crews of workers who erected the gates were assigned to open them. They walked underneath, and used a hook at the end of a long stick to pull a loop hanging from the crossbar of each gate. That opened the cloth bag containing the fabric panel part of the gate. The bag fell to the ground, along with a cardboard tube around which the fabric was rolled. The fabric part then hung from the horizontal crossbar. By the afternoon of February 12, all of the panels were unfurled.

The project staff remained deployed in the park, patrolling, and replacing damaged gates. On many days, staff members distributed free 2.75" square souvenir swatches of the orange fabric to passers by, in part intended to discourage vandalism. Nevertheless, one of the gates, near the Shakespeare Garden in front of the Delacorte Theatre, was vandalized and replaced frequently. The swatches remain highly collectible and trade on eBay for about $10 each. 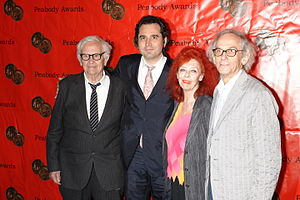 Al Maysles, Antonio Ferrera, Jean-Claude and Christo at the 6th Annual Peabody Awards for The Gates

The installation was set to close February 27, 2005.[3] Christo and Jeanne-Claude also visited the installation on the last day, entering Central Park at its less congested northern end. Although the Park's roadways were closed to vehicles, they traveled with a police escort in their Maybach sedan. Christo then left the car and walked to several vantage points, capturing last minute photographs with a professional assistant. After the exhibition closed on February 27, the gates and bases were removed. The materials were industrially recycled, partially as scrap metal.[4]

A 2007 documentary film's synopsis by the video's promoters, Kino Lorber, contend this artwork "brought over 4 million visitors from around the world to Central Park."[5]

The Gates alludes to the tradition of Japanese torii gates, traditionally constructed at the entrance to Shinto shrines. Thousands of vermilion-colored torii line the paths of the Fushimi Inari shrine in Kyoto, Japan. Successful Japanese businessmen traditionally purchased a gate in gratitude to Inari, the god of worldly prosperity.